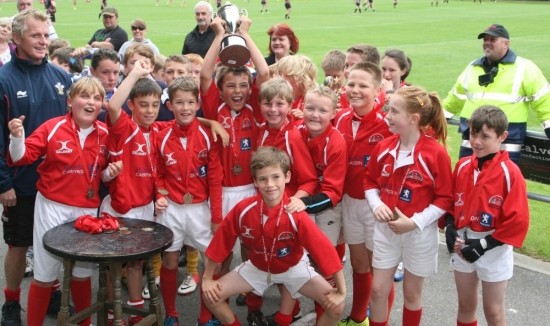 PARC-Y-Tywyn came through a great final at The Gnoll, Neath, on Sunday to win the Wales Rugby League Primary Schools Cup.

The tournament, run in conjunction with South Wales Scorpions, saw a great number of talented boys and girls on show and Parc-Y-Tywyn reached the title the hard way by winning by a single try in each of their matches.

Llanfoist gave them a hard task in the final, having won all three of their group games without conceding a try. Llanfoist then won their semi-final by the odd try in five against gallant Trelewis.

Parc-Y-Tywyn, on the other hand, beat Bryn School and Trelewis two tries to one in both their Group B matches and then scored the only try of the game in beating Lakefield in their semi.

Then, in the final, Parc, from Burry Port, took the lead against Llanfoist who then went up the other end of the match to draw level. But a final try a minute before the end gave Llanfoist a difficult task to level again and Parc held out to take the cup.