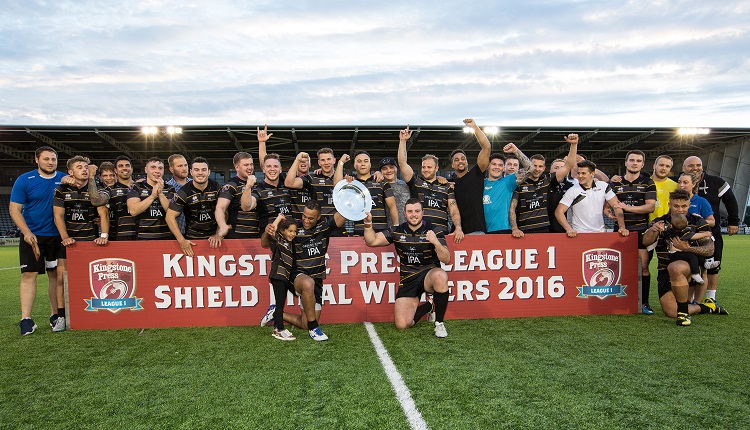 Scoring five tries apiece, it was a match worthy of a final that saw Thunder maintain their winning run by extending their tally to ten games in a row unbeaten.

Rising to the occasion, both teams opened the match strongly with attacking sets seeing plenty of meters gained and defensive ones the obligatory big hits.

It was the visitors who went closest to scoring first, with a neat grubber kick in behind the Thunder line creating a half-chance, but the experienced heads in the Thunder line snuffed out the threat and ride out the pressure.

Having cancelled each other out in the opening exchanges, a clever punt from Dan Parker set up the opening score on 13 minutes, as the centre perfectly directed his kick straight down field allowing former England international Peter Fox to outsprint his opponent to score.

It was the first of three quick-fire tries that came through Fox and Parker combining well. Parker added his name to the scoresheet with the second by finishing off a move created by Tom Reudiger and Fox, before the former England winger added his second after another good run from Parker.

A try from fullback Reudiger and a 100% kicking return for Benn Hardcastle put Thunder into a 24-0 lead approaching the half hour mark and seemingly cruising towards the Shield.

The Crusaders had the final word of the half with Jack Hansen crossing for a try converted by Tommy Johnson, with the score galvanising the visitors for the second half.

Scoring first on 46 minutes, Thunder responded with a converted try from Rhys Clarke, however, it was North Wales who would enjoy a purple patch that had the majority of those present at Kingston Park nervously watching the clock.

Finding a second win and capitalising on ever increasing errors from the hosts, Crusaders did a Thunder with three tries and two conversions over 15 minutes, reducing the gap to just four points.

A drop goal three minutes from time for Hardcastle relieved the pressure slightly, by ensuring only a converted try would be good enough for North Wales, but a penalty in the dying moments looked to have given the visitors the opportunity they needed to steal the win.

Thunder however, summoned the last surge of strength to push Crusaders back before taking play back to the visitor’s goal line with their final attacking set.

It meant an end to end effort would be needed which, after a solid start, saw the ball lost forward on tackle three, allowing Thunder to crown Mick Mantelli’s first year to end by taking the inaugural League 1 Shield final

Man of the Match – Dan Parker