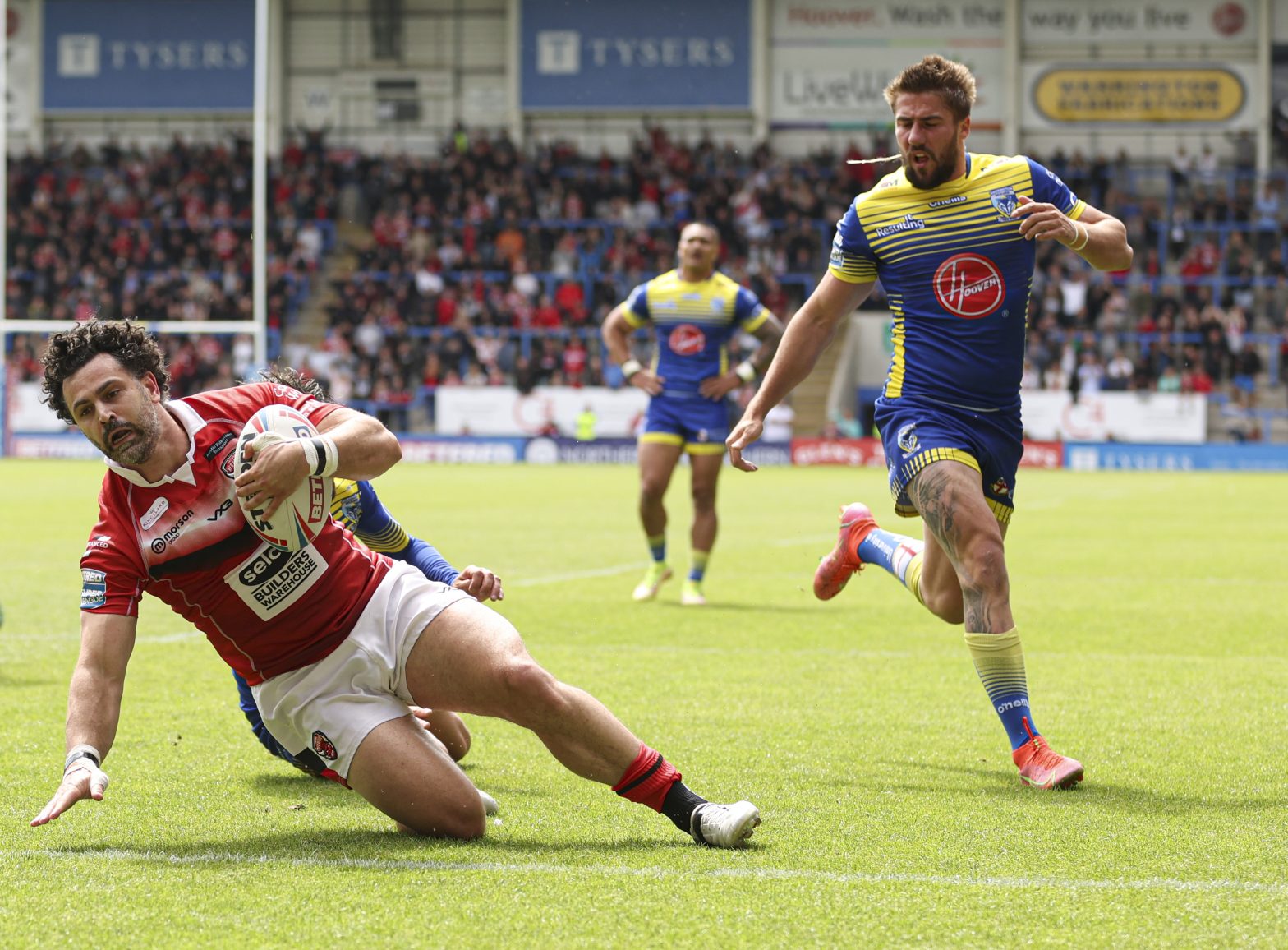 The race for the next Welshman to score 200 first class rugby league tries is now in full swing, as both contenders, Rhys Williams and Rob Massam scored their 190th last Sunday.

Williams’ career total includes a record 22 for Wales, 157 in the English league system, plus 11 for Central Queensland Capras in the Queensland Cup. Most of Massam’s are for North Wales Crusaders – 156 of them – with 33 for Rochdale Hornets, plus one for Wales in the 2013 Rugby League World Cup.

The 200 first class tries list has long since been a badge of honour for players, ever since it was first published in the book “Gone North: Volume 2” by Robert Gate in 1988.

Since then, just two more have been added to that list – Phil Ford and Anthony Sullivan, bringing the total up to 18 Welsh players, and the often quoted “less than 20 Welsh players to have scored 200 tries” may soon be redundant.

Williams scored the opening try for Salford Red Devils as they earned a 32-24 win at Warrington Wolves in the men’s Super League, whilst Massam went over in the 55th minute in North Wales Crusaders’ 30-16 League 1 win over London Skolars.

Elsewhere in Super League, there was a try-scoring debut for Kyle Evans, who grounded in the second half of Wakefield Trinity’s 46-22 defeat at home to Wigan Warriors. Regan Grace and Gil Dudson went up against each other in France as Dudson’s Catalans Dragons side beat St Helens 20-18.

Also in League 1, new Hunslet signing Sion Jones helped his side to a 36-24 win at Cornwall. The home side, who fielded Charley Bodman and Will Odgers were 12-0 up on 19 minutes before the Yorkshire outfit took control. Midlands Hurricanes were also competitive against northern opponents but were never in the lead against Rochdale Hornets, losing 42-34. Cobi Green and Gavin Bennion starred for Rochdale, with Sam Bowring in the Midlands side. In the top versus bottom clash, Keighley Cougars outclassed West Wales Raiders, winning 86-0. Welsh international Joe Burke was one of the many Welshmen in the Raiders side. Finally, Mike Butt was in the Swinton side as they lost 26-12 at home to Doncaster.

In the RFL Championship, Dalton Grant and Jude Ferreira were part of history at London Broncos. Grant scored the second try in a dramatic comeback as London were 28-0 down to Sheffield Eagles at half-time, only to win 36-28. This is believed to be a record, at least in the summer era. Welshmen were up against each other at Workington Town, but Connor Davies’ side lost 38-0 to Widnes Vikings, where Matty Fozard scored two tries. Luis Roberts was also in the Vikings side. Newly capped players Bailey Antrobus and Tom Hopkins were also up against each other, with Hopkins on the winning side for Barrow Raiders as they won 24-16 at York City Knights. Will Evans was in the Whitehaven side who drew 26-all at Batley Bulldogs, and finally, Elliot Kear and Gavin Walker were in the Bradford Bulls side as they lost 56-6 at home to leaders Leigh Centurions, for whom Caleb Aekins starred at full-back.

Rhys and Ben Evans didn’t make the first team at Bradford this week, but they could make a return soon, especially after helping their reserves to a 56-16 win over Hull Kingston Rovers. Luke Thomas also tasted a big win with Warrington Wolves reserves as they beat London Broncos 48-10. However James McGurk’s Newcastle Thunder reserves weren’t quite as successful. He was in their side as they lost 52-12 at Leeds Rhinos.

In Australia, Tyson Frizell was on the winning side for Newcastle Knights as they beat Gold Coast Titans 38-12 in the NRL. Josh Ralph also tasted victory with the Mounties as they beat Blacktown Sea Eagles 20-10 in the NSW Cup.

In the Women’s Super League South, there was a commanding 94-0 win for Cardiff Demons as they outclassed Oxford Cavaliers. Cardiff took their time to get going, with Katie Carr opening the scoring on nine minutes, adding another in the second half. Amberley Ruck then added the first of her 13 goals. She also scored two tries during the game. Eleri Michael, Brittony Price and Charlie Mundy scored hat-tricks, Bryonie King went over twice, whilst Lauren Aitken and Joeann McGuire also grounded. Rosie Carr and Molly Reardon were the other Wales internationals in the Cardiff side. Elsewhere in Super League South, Emily Hughes and Kathryn Salter both started for London Broncos as they kept up their 100 per cent winning record by beating Bedford Tigers 40-22. Finally, in the north, Anne-Marie Sayle was in the Castleford Tigers side as they went down 8-4 at local rivals Wakefield Trinity, and Carys Marsh started for Wigan Warriors as they lost 48-12 at home to Leeds Rhinos.