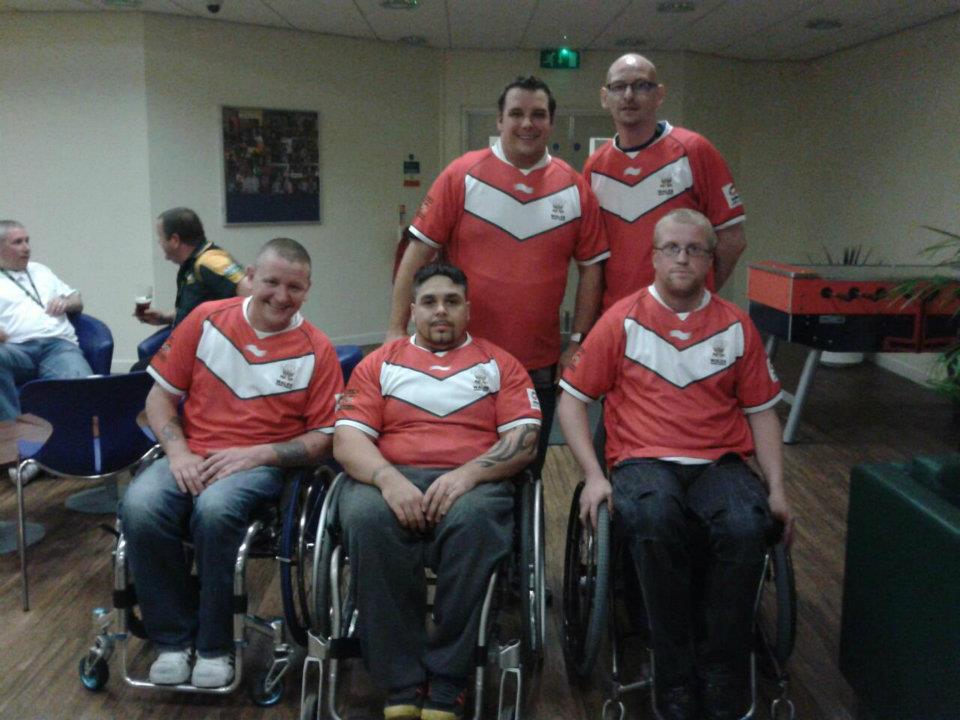 Wales took part in the first-ever Wheelchair Four Nations tournament ten years ago today in Hull, where they took on Scotland and beat them 20-6. This was also Scotland’s first ever Wheelchair Rugby League international match. The 26-point game remains the lowest scoring Wheelchair international that Wales have ever been involved in. Scores of Wheelchair matches are normally around double that of a “running rugby league” game.

Since then, the Wales Wheelchair side have been the most active out of all of Wales’s international outfits, having now played 43 matches over nine years, winning 23 and losing 20, taking part in no games in 2020 due to Covid.

They’ve also been the most successful during this last decade. In 2013, in just their fifth ever match, they became the first full Wales international rugby league side to ever beat Australia. That 25-16 win that took them into the semi-finals of that year’s World Cup. Not content to perform this feat once, they did it again three games later, in the third-placed play-off, beating the “Wheelaroos” 16-14 (still the side’s narrowest win margin).

Wales were firmly established as third in the world, a position they still hold today, primarily thanks to their one hundred per cent record in the “Celtic Cup”, a three-nation annual one-day tournament where Wales, Scotland and Ireland compete in three gruelling 80-minute matches over a six-hour period. Wales are still unbeaten in this competition, winning 12 matches out of 12 and lifting six titles. Their latest match, back on May 7th of this year, was a 116-6 win over Scotland, breaking a Wales international record for the highest ever margin of victory and highest ever points scored in a game. Wales Wheelchair also surpassed scoring 2,000 total points scored in their history during that game, whilst Scott Trigg-Turner’s 48 points was a Wales individual match scoring record.

Wheelchair Rugby League is as close to the running game as possible. It’s a five-a-side, 80 minutes long, played on a basketball court, and players are “tagged” instead of tackled, but other than that, it is pretty much indentical to the 13-a-side rugby league game that most people are aware of. Players have to score tries by placing the ball over the try-line (although if a player has limited mobility which affects them from being able to do this, they just need to touch the ball on their wheel when crossing the line), whilst goals and kick-offs are done with the fist with all bar drop-goals using a waist-high tee. It’s also the most inclusive sport in the world. Players of any age or gender can play on the same side – there are currently two women in the Wales Wheelchair international side, an outfit that has had World Cup players aged between 15 and 65.

Wales Wheelchair’s most capped player is Alan Caron, who has turned out 38 times (also a Wales international record for most appearances for an individual international side) since making his debut in the very first game ten years ago today. He also coached and captained the side that year, and became heritage #1 of a list that now totals 40 players.

He said: “Originally, I was asked to help with a bit of coaching and to try and grow the game in Wales, then my eligibility to play for Wales was qualified through my grandparents.

“I originally came from a rugby union background, but not long after I started playing rugby league, I picked up an injury which ended my running rugby career. Then many years later I was asked to play Wheelchair Rugby League and I really enjoyed it.

“For the first competition in Hull, we only had six players, and on the day with an hour to go, the kit arrived in the post, we had to find someone to get the tags stitched on just before the game, but we got the two wins. I’m so very proud that I was there at the start, and I’m still here now after ten years, I’m one proud Welshman.

“Over the last ten years, there have been a lot of highlights. Just getting to know the lads over time and making good friendships has been a really big thing for me. Also, to play in two World Cups, finishing third in the first of them, winning the Celtic Cup so many times, and also to be told that you’ve made history yourself by being up there alongside professional athletes who have played the game, which I can’t get my head around and have to pinch myself at times. It’s always been a real honour to represent Wales and something I thought I’d never do. If I get on for four minutes or for a whole game, putting the Welsh shirt on is always a massive achievement for me.

“Wales Wheelchair Rugby League has grown so much in the last ten years. In 2012, there was just Wales, then there was North Wales Crusaders, and that was it. Now we’ve got the game in South Wales with Torfaen Tigers, we’re getting Cardiff and West Wales involved too, and we want more. Wheelchair Rugby League, along with the women’s game, is available for any club in Wales.”

With 25 games in charge of Wales, current head coach Stephen Jones has equalled the number of games that Clive Griffiths was in charge of the men’s side between 1991 and 2000.

Jones said: “Having a brief knowledge of disability sport through both my time in the RAF, and from televised exposure via the Paralympics, I never thought in a million years that I would ever be involved, never mind as a coach.

“Coming through a pathway from assistant to head coach within the early years of the sport in Wales is something I will forever hold dear to me.

“This sport hasn’t just allowed me to preserve my coaching but has also allowed the same with the players. Wales Wheelchair Rugby League has allowed players from all backgrounds and history, disabled or not to come together and be a part of some history. We have fielded players who have been told that they’ll never play sport again, or have had career and life-threatening injuries, and they’ve become international superstars.

“We’ve got people like Gary Taylor involved, who went from being a UEFA referee to an amputee to a Wales Wheelchair Rugby League international, and now he’s the assistant coach. This proves that sport truly acts as one big avenue that anyone can explore.

“From my early days of barely having a squad of 10 players, to now having a selection pool of nearly 70, is a testament to the hard work done. From the launch of the North Wales Crusaders wheelchair side in 2013, and now to having four clubs operating five teams across various competitive competitions, shows how much work has gone into developing the game in Wales.

“Going into our tenth year is huge, not only as six-time Celtic Cup champions, but having the World Cup to end the year is a great way to cap our Tin Anniversary.”

“Their achievements, on an annual basis, with six successive wins at the Wheelchair Celtic Cup competitions have underpinned the sustainability and growth of the game in Wales.

Now Wales are preparing for Rugby League World Cup in November and then a groundbreaking tour to Brazil in early 2023. If Wales reach the World Cup Final, this could turn out to be their 50th match.

Wales Wheelchair’s next game is a friendly against Ireland in Halifax on Saturday 8th October 2022 at Calderdale College, Halifax, kick-off 2pm.