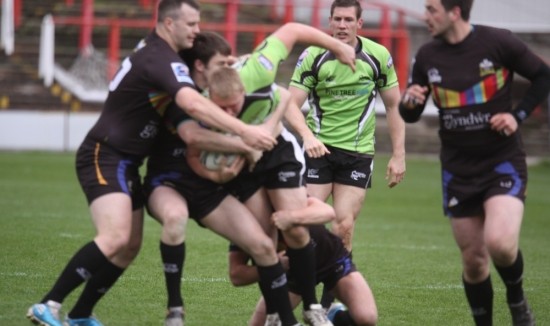 This time last year we were reflecting on Crusaders’ withdrawal from the Super League competition, and at the same time, the likelihood that rugby league was going to die in North Wales.

One year on, things are looking very different indeed. North Wales Crusaders – the newly formed outfit from what remained of the old club – have had a successful debut in the Championship One, whilst the amateur game has taken a huge stride forward with the formation of the North Wales Conference.

North Wales Crusaders have surpassed expectations this season, and although they finished in eighth position, they were in with a chance of making the play-offs right up until the final hooter at Whitehaven last Sunday.

Head coach Clive Griffiths is delighted with the season that his side has had. “We were predicted to finish at the bottom with few points at the start of the year, so to finish where we have is a good achievement. But the real success is that the club has survived and we have managed to keep rugby league in Wrexham”, said the ex-Wales coach.

Griffiths greatly appreciates the work that has been done behind-the-scenes. He said: “The spirit in which it all came about is brilliant. There are many people that deserve a lot of credit for keeping this going. And the fans have been amazing too.”

“The support this season has been second-to-none. They are most definitely the best there is in the league. You just have to look at them just over a week ago up in Whitehaven, we were behind by a fare amount of points and they carried on singing right up until the end.”

A number of players in the squad have been particularly impressive over the course of the season – Rob Massam, Andy Moulsdale, Jono Smith and Jamie Clarke just a few to note that have made the step up from the amateur game.

However, Clive Griffiths doesn’t want to single individuals out. “It’s been a big team effort this year, and that’s how we do things here – it’s all about the team ethos. Some of the lads have come a long way and have had to make the step up to this level. The ones that have stepped up have equiped themselves very well”, he explained.

“It’s been a steep learning curve for us this year. We’ve had some hammerings along the way, but we’ve also had some incredible wins too. It’s great that we got within touching distance of the play-offs, and we know for next year where we want to recruit to be in with a better chance.”

He wouldn’t contemplate the idea that Crusaders should be looking for promotion next year though. “Of course our ultimate goal is to get into the Championship, but we won’t be getting ahead of ourselves, as it won’t be easy. There’s some good sides in this league and they’ll be looking to recruit just like us”, explained the coach who also takes up a role with Wales Students too.

Griffiths clearly highlighted his favourite moments of the season. “The Welsh derbies were fantastic. Travelling down to the Gnoll brought back memories from my playing career, I really enjoyed it. The support we had down there was great too. It’s good to see two Welsh sides coming together.”

And this season has set up the next one very nicely for North Wales Crusaders. The Wrexham-based side will have a full pre-season under their belt – something that they weren’t granted this year due to the timescales in which they had to work in with the bidding process to get the club into the Championship One – and that will enable Griffiths a little longer to pull together a squad which he feels can take the club forward.

Although this year has been a real success, you could see where improvements were needed if the club are to really mount a challenge next year. But whether they do or not – although it would be nice – isn’t really that important, as for North Wales it’s more about building a club that is sustainable and ready for whatever lies ahead in the future.

This wasn’t the only success story though, with the North Wales Conference division proving to be a great move in its first year. The eventual winners of the tournament were the Conwy Celts, who triumphed in the final against the Prestatyn and Rhyl Panthers.

It was a closely contested competition but the three more experienced sides – Prestatyn, Conwy and Dee Valley Dragons – showed their superiority against both Wrexham and Flintshire, who were newly formed sides at the start of the year. Nevertheless, all of the five sides put in a great shift over the season and next year should see an even more exciting competition.

As well as this you have the North Wales Crusaders U18’s who have been competing in the Heinz Big Soup Conference Youth League. Although they haven’t recorded any wins this term, they have continued to compete and it creates a pathway for young talent to come through, which is only good in the long term for North Wales.

And that’s without mentioning the fantastic work that has gone on to bring in iniatives such as street rugby and rugby festivals throughout the area. There is also a hope that the interest in these events can move through to the clubs within North Wales, and that these clubs can then put together a strong junior set up for a league to be put in place for juniors.

All of this just signifies how strong rugby league is within the region of North Wales, and at this rate, it’s only going to get stronger. Wrexham has the pleasure of hosting Wales’ international triangular series clash with England at North Wales Crusaders’ very own Glyndwr University Racecourse Stadium in October, and the people of the North will most definitely show their passion for the game of rugby league in that fixture.

The supporters have been the real driving force to get the Crusaders to where they are now, and without them, it would be fair to say that the club wouldn’t be here now. But Jamie Thomas and his team were also key figures in pushing the club forward, and they’ve all done a sterling job whilst being in charge since.

Next year is huge for North Wales Crusaders; they need to try and build on what they’ve achieved this season. It will need another collective effort for that to happen, but from what I’ve seen in the past three years in Wrexham, that shouldn’t be a problem. This is a club that I expect to become very successful.