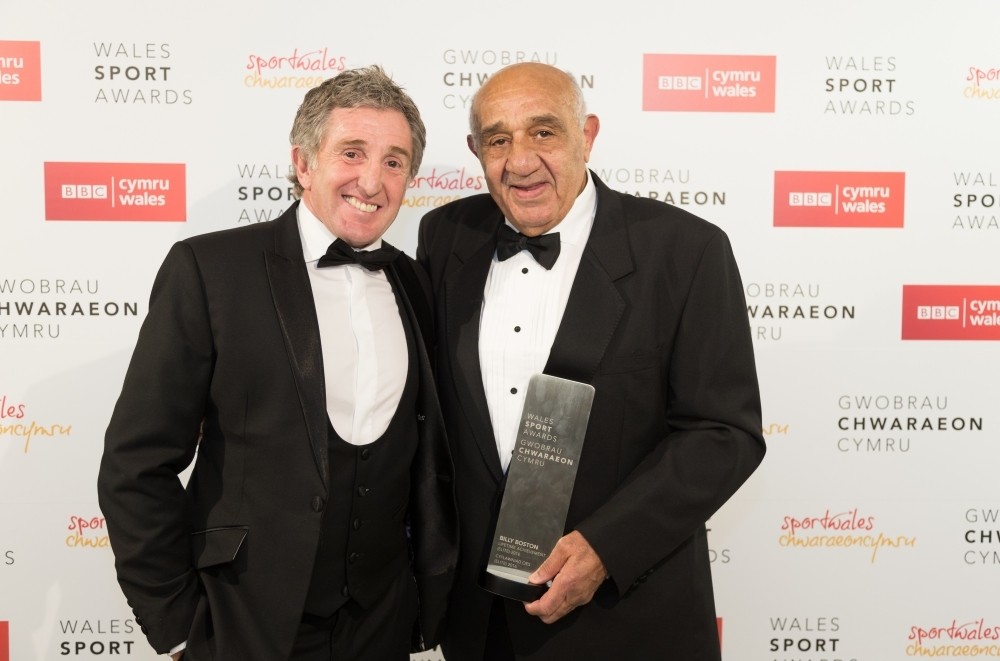 Former Wigan and Great Britain legend Billy Boston MBE was honoured with a BBC Wales Elite Lifetime Achievement at the BBC Wales Sports Personality of the Year Awards at the Millennium Centre in Cardiff on Monday night.

It’s been quite a year for honours for the 82 year old. In April, he was one of the original two inductees to Wales Rugby League Hall of Fame and just a few months ago, a bronze statue of him was unveiled in Wigan. And in August 2015, he was also immortalised on a statue at Wembley Stadium alongside fellow Cardiffian and Welsh Rugby League player Gus Risman.

Boston was born and brought up in Angelina Street, Cardiff, which is less than a 15 minute walk from the Millennium Centre, and on Monday night, the packed house at BBC’s Hoddinott Hall inside the centre were treated to an excellent summary of Boston’s life story, written by freelance journalist Peter Jackson, who also scribed about Boston in a rugby union publication in September when the Wigan statue was unveiled.

There were notably a few shocked gasps around the hall when it was announced that Boston was perhaps ignored by Cardiff RFC, and therefore couldn’t get a chance with the Wales RU side, due to the colour of his skin, Boston being mixed race with his father hailing from Sierra Leonne.

The Lifetime Achievement trophy was presented to him by Jonathan Davies, another player who “went north” to earn a crust playing rugby, this being in the pre-1995 days where being paid in rugby union was outlawed… well officially anyway, Boston revealing on Monday night that he was paid £5 per game – under the table – for Neath RFC before joining Wigan for a signing on fee of £3,000 in 1953.

Davies, who said that he was glad he’d didn’t ever play against Boston, turned out for Widnes and Warrington during his Rugby League career, but Boston was primarily a Wigan man, playing for them from 1953-68. He represented Great Britain 31 times and was their first non-white tourist, but was injured on the two occasions during his career that Wales actually fielded an international Rugby League side so didn’t ever officially win a full Welsh cap. He did however pull on a Wales shirt once, when they took on France B in 1955, and was just this year, awarded a Welsh Cap by Wales Rugby League. In total, he scored over 500 tries in a career of over 500 games for club and country.

Boston attended along with his wife Joan, and was delighted and honoured by the occasion, the only real celebratory mention of rugby in either code at Monday’s ceremony.

He said: “I felt very nervous going up for the award but I was very grateful to receive it. I’d like to thank everyone for the reception that they gave me. It was a tremendous honour to have this presentation in Cardiff, as it was in Wigan when they unveiled the statue. There are some great players around in sport but it’s me who’s been recognised. I’m very grateful.”

Davies said: “The biggest complement I can give him is to say that I’m glad I didn’t play against him. He’s a bit like Shane Williams and George North all rolled into one player. He could ran round, over and through his opponents. He was adored in Wigan when he played and he’s still adored now. When we went up north and followed in the steps of Billy, Dai Watkins and Lewis Jones, Billy was great to us. We’ve a fantastic tradition of Welsh players going north which still continues today.”

Monday night wasn’t the first time that Boston was honoured in Cardiff as in 1990, he became the first ever inductee to the Welsh Sports Hall of Fame – this during a time where Rugby League was still a frowned upon phrase in the Welsh capital, despite the under the counter payments that had always existed in the 15-man game in Wales, the rugby union authorities turning a blind eye to such acts allegedly in order to keep the international game alive – and Davies, who was about to launch a new era of Welsh international Rugby League, was still banned from entering Cardiff Arms Park.

Boston is a legend and everyone who meets him is honoured to do so, it’s certainly the only time I’ve ever seen former Celtic Crusaders coach John Dixon starstruck, when the two met following a match in 2006.

With a Welsh cap awarded to Boston, a statue in Wigan unveiled and now this honour from BBC Wales, all in 2016, Boston has now been completely immortalised by club and country, with one possible exception. A statue of him in Cardiff Bay, perhaps somewhere in between Monday’s awards location and his birthplace, is also long overdue.

When it comes to a player like Billy Boston and indeed the history of the game related to him, it’s not a case of what you write but what you leave out. I therefore recommend the following books as a follow up…