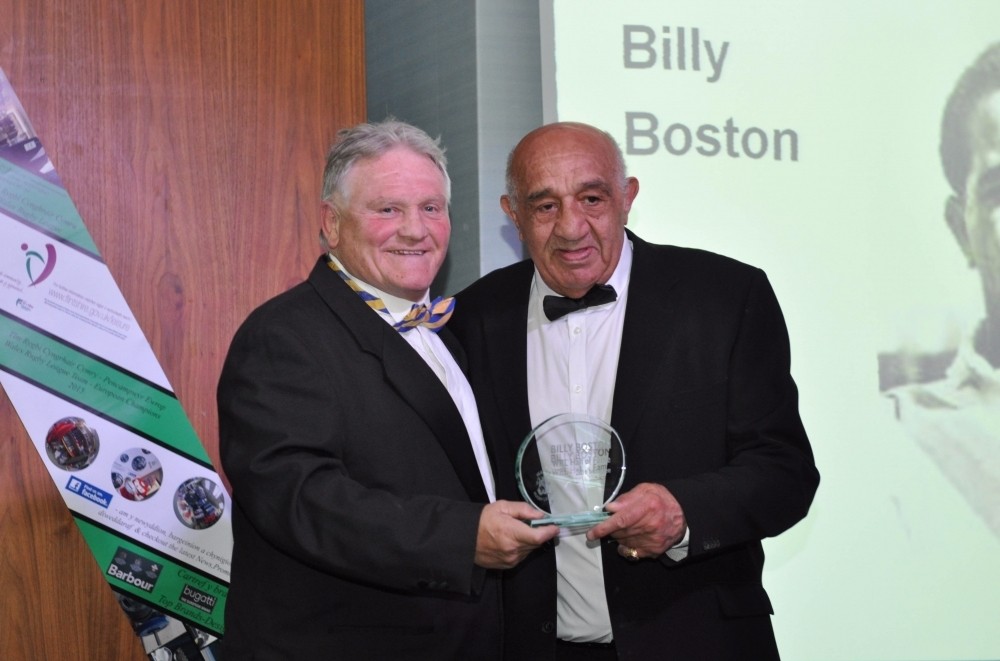 Wales Rugby League legend Billy Boston has at last received what he’s wanted for most of his life – a Welsh cap.

The 81-year old was in attendance at the recent inaugural Wales Rugby League Hall of Fame dinner, where he, along with fellow Cardiffian Gus Risman became the first two inductees.

Due to a lack of professional Welsh rugby players at the time of Boston’s career, there were only two full Wales internationals played during that period, and on both cases Boston was injured. However he did play against France “B” for Wales in 1955 (played at the same time that the France first team was touring Australia). Following the awarding of his cap, he has been given heritage #382. This number, which falls between the winter and Super League era of rugby league, has become available due to a reporting error from 1995, that was discovered after the heritage numbers were introduced.

Boston, who scored 571 tries in 564 appearances his career, the second highest all-time try scorer in the history of the game after Brian Bevan, was capped 31 times for Great Britain scoring 24 tries. He was the first BAME player to be selected to tour Australia and New Zealand.

Nicholas said: “I had two big heroes when I grew up, one was John Charles and one was Billy Boston. They were people’s players, they travelled on the bus to games and they were very much of the people and Billy was one of the reasons that I got into Rugby League.

“I was privileged to be at Wembley when they unveiled the statue of Billy, Gus and the other players and I’m delighted to induct him into the Wales Rugby League Hall of Fame.”

Nicholas presented Boston with his Hall of Fame trophy while former Wales player and coach Iestyn Harris presented him with his Welsh cap.

Boston then presented Warrington and Wales star twins Rhys and Ben Evans with their 2013 Welsh caps that they hadn’t yet received, and also to Morgan Knowles, who won his first cap last year in the European Championships.

Gus Risman, who died in 1994 aged 83, was represented by his son John, who played for Wales in the 1970s. Winner of 18 Welsh caps, he also won 17 Great Britain caps, captaining the 1946 “Indomitable” tourists of Australia, and guested for England in a promotional international in France. In total Gus’s full-time pro player career reads 828 appearances, 203 tries, 1623 goals, 3855 points.

John Risman said: “Thank you very much on behalf of my father. It’s a wonderful acknowledgement to his career. He was a fervent Welshman and enjoyed every minute of his involvement with Wales Rugby League. He would have been truly honoured and delighted with this.”

Gus Risman’s award was presented to John by Wales Rugby League chairman Brian Juliff who played alongside John for Wales.

Juliff said: “Just to see Billy Boston with us tonight is such a pleasure. It was fantastic to honour him and Gus Risman as our first two Hall of Fame inductees. I’m good friends with his son John and I had great pleasure with presenting John with his father’s award. Also, to have the current Wales side here as the European Champions, made it an amazing night.”

Most of the 2015 Wales squad were in attendance and they were presented with their winners medals from their successful 2015 European Championship campaign where they beat Ireland, Scotland and France to win the trophy.

Wales coach John Kear said: “They didn’t have a formal medal presentation last year after the European Championship, and we felt that after all the effort that the players put in, they deserved this. I’d like to thank the Wales Rugby League governing body and the sponsors for organising the night.

“We at Wales Rugby League, like to create a professional environment that rewards people, but it’s about making memories and playing for the pride of your country, not about what goes in your bank balance. The players’ commitment last year was phenomenal, and when you’re sat in a room with Billy Boston and you remember Gus Risman and what these great players have done, you feel very humble. It’s a privilege to be a part of Wales Rugby League and this was a special night.”

Wales captain Craig Kopczak was awarded the trophy for the Welsh international Player of the Year for 2015.

Kopczak said: “Winning the European Championship was a fantastic achievement this was for Wales. I feel privileged to captain Wales and represent my country. It’s a real honour to win something like this. We’re getting stronger and stronger and I’m sure there’s bigger things to come for Wales with the World Cup just around the corner.”