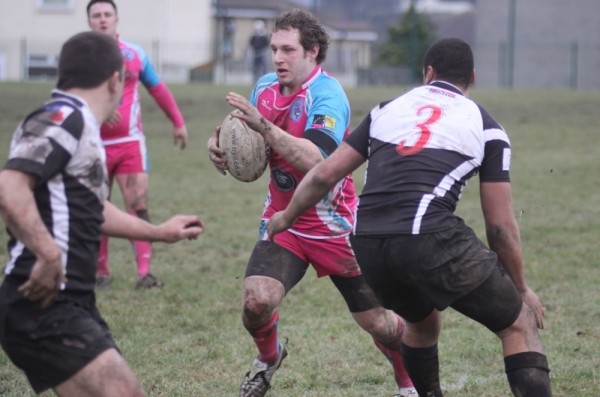 By Karl Jones at Nelson RFC

The Army have progressed to the second round of the Carnegie Challenge Cup after a hard fought 30-24 victory over the Valley Cougars.

The moment that ultimately decided the contest came through a contentious try by Army centre Josh Lyons. The Cougars were forced to surrender possession after knocking on, and Lyons cut through the defensive line from the resulting scrum. Lyons then had to beat the full-back, who halted Lyons’ charge, but the centre had the whereabouts to reach out and place the ball on the tryline with just eight minutes remaining.

The try was then confirmed by the referee following consultation from his assistants amidst home fans’ suggestions that the tackle had been completed prior to the ball touching the whitewash.

The game had the feel of a typical cup tie, with a slight flavour of each side’s first outing of the season, the high turnover a count an indicator of the stakes involved. After a physical opening quarter the game had its first score moments later. Slick hands in the Cougars back line saw Chris Holcombe the grateful recipient of the opening try.

As the half wore on, the influence of the Army half-back Andy Kay grew. After being held up by a pack of Cougar defenders, he gave his side the lead on 32 minutes with a well-taken try. And moments later, his sliderule kick forced a second goal line dropout.

The Cougars regained the lead shortly before half-time as James Thatcher profited from the vision of Emanuelli and his partner Ceri Cummings as they shipped the ball wide quickly. The full-back received the ball and glided over untouched after a slip in the Army defensive live.

The determination shown by the Cougars in both attack and defence was epitomised by their forward pack. Troy Brokbank carried the ball powerfully, giving Emanuelli a platform to carve out openings with his flair. A clever chip was inches from being re-gathered by the half-back.

The Army were presented with the first scoring opportunity of the second half. A penalty for holding down at the tackle presented Butters with a shot at goal, but his effort drifted wide of the upright. But the strength of the Army was not to be denied and, after consecutive sets of tackles, Danny Hunter snatched a try for the play-the-ball area. Butters’ failure to convert gave the Army a slender 14-12 lead.

Cummings then rushed out of the defensive line to make a man and ball tackle. His missed effort presented the Army with an overlap that Turanga finished off effectively to touch down for the Army’s fourth try of the afternoon.

Emanuelli again looked to chip on the fifth tackle and this time he was first to the loose ball. After regaining possession he fed Steven Bray who crossed to score beneath the posts. Emmanueli again converted to level the tie at 18-18.

The enterprise of the Cougars backs was then rewarded with the lead. Having moved the ball through the hands for their opening try, Emanuelli endeavoured to do the same once more. The half-back ordered his forwards to carry the ball directly and suck in defenders, before neatly slipping a pass wide to the on-rushing Liam Thomas, who scored in the corner.

As the Cougars’ grasp on the game slipped away from them, Emanuelli looked to catch the Army off guard with another chip kick, but the ball eluded him, enabling the Army to kick the ball into touch and secure the win.