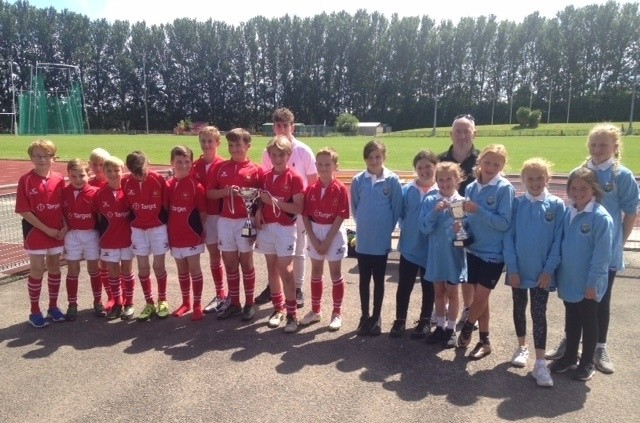 The Grand Finals were the culmination of a number of qualifying tournaments through the spring which ended with a number of primary schools from both Wrexham and Flintshire competing on Finals Day.

The day saw both a boys and a girls competition for the second successive year and once again the girls showed what a wise decision it is to have a separate tournament for them.

The girls competed for the Crusaders Cup. There were highly competitive games in both of the pools in the morning where Ysgol Bryn Coch and Ysgol Plas Coch progressed from Pool 1 and Borras Park CP and Cefn Mawr CP progressed from Pool 2. The semi-finals saw Ysgol Plas Coch edge past Borras Park by 2 tries to 1 and there was a thriller in the other Semi as Cefn Mawr made it to the final on the toss of a coin against the unlucky Bryn Coch after a scoreless game which went to both extra time and golden score extra time.

The final was a brilliant game of Touch Rugby League, with both teams giving their all. In the end the girls from Cefn Mawr CP won the day against Plas Coach by 2 tries to 1. All the girls who took part on Grand Final Day deserve huge praise for their effort, enthusiasm and skill.

The boys’ final was a very high quality game of Touch Rugby League, both Derwen and Bryn Coach were hugely organised in their defence and enterprising in their attacking play. It took on moment of magic from the Bryn Coch winger to win the game with a weaving run along the flank to score what turned out to be the only try of the game to give Ysgol Bryn Coch the Jacqui Walker Memorial Trophy.

The late Jacqui Walker as a huge supporter of local children’s sport and especially both codes of Rugby. Jacqui’s husband, Dave and youngest son, Tomos, were on hand to present the trophies to the winning school’s as well as four individual trophies to boys and girls from Wrexham and Flintshire who had performed impressively on the day.

Allen Jones, Wales Rugby League’s development coach, could not have been happier at the day’s events. He said: “Once again, for the fourth successive year, we have had a fantastic Crusaders Cup Grand Final Day for Primary Schools. It never ceases to amaze me just how much effort, enthusiasm, commitment and skill the boys and girls show at the Touch Rugby League tournaments we organise, and Grand Final Day was just an outstanding day.

“I would like to thank all involved in putting on such a high quality and successful event. Thanks to the Staff at Queensway Stadium Wrexham, Sports Development Staff at both Wrexham and Flintshire for their help on the day, Matthew and James from Crusaders Community Mini’s for helping out with the referee duties and to David and Tomos Walker for presenting the trophies and finally to all the teachers, teaching assistants and pupils for supporting the schools Rugby League Programme. See you all again next year for the 2017 Tournament.”