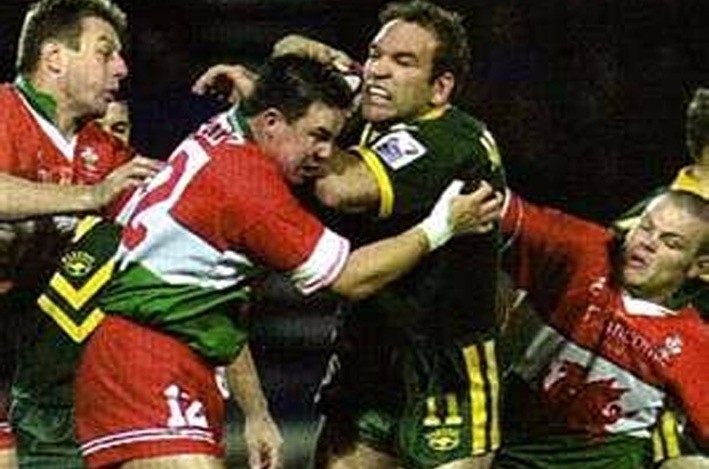 Former Salford and Wales forward Paul Highton knows first hand just how difficult it is for players at the end of their career dealing with change.

He is currently taking part in a gruelling challenge, #RidetoRio, where he and several others are cycling all the way to Rio de Janeiro in Brazil ahead of the 2016 Olympic Games to raise money for Rugby League Cares.

Speaking at the State of Mind launch event, held at the Halliwell Jones Stadium, Highton recalled the end of his career.

“I thought I was one of the switched on ones. I knew it was coming and I knew I had to do something. I had seen a load of car crash stories so to speak.

“I went back to university and set up a business. But it was probably a good two years after I retired that I really struggled.

“I’d gone from being with 30 of my best mates every day to being on my own.

“That transition was a bit of a delayed reaction to me. It wasn’t until my business was up and running and doing OK that I took my eye off the ball and started really struggling with my loss of identity and that lack of self worth and everything else that went with it.

“There was some really dark times around then.”

In the last few years of his career, Highton had to deal with a divorce from his ex-wife, helping to raise two young children as well as studying for a degree.

On top of that, he was trying to focus on rugby too.

“If I had done my education and got my degree and everything else at 19/20/21, I’d have been able to have solely concentrated on playing at the best time of my career.

“There are some studies going on in America at the moment where they are looking at sportspeople who have their off-field life sorted, with careers and education or whatever, and how if their performances go through the roof it’s not the be all and end all if they were to finish tomorrow.

“The RFL are really looking in to it now and taking it serious.”

As well as exploring career avenues outside the game, Highton has continued to give something back to the sport of rugby league through player welfare roles with Salford, the RFL and most recently, RL Cares.

Highton added: “I’m passionate about trying to put stuff back into the game that I didn’t get. I can see there are huge gaps in the market, and I can see what’s happening just before it happens really.

“I think players are more encouraged to talk more now. I still think there’s that kind of stigma around it at the moment, which is why initiatives like this are fantastic.

“Players think showing your hand is going to jeopardise their spot in the team, it’s going to be seen as a weakness, and you kind of keep it to yourself and it’s only a matter of time before you build into that kind of pressure cooker scenario and it goes boom.

“It’s damage limitation. There are few people that would come out straight and talk about it, but if they can start recognising those warning signs of feeling down and depressed and not themselves, and do something about it rather than wait until the very end when it’s too late, well that in itself is a great improvement.”

The State of Mind themed round runs from 7-10 July, and will see volunteers from the charity promote mental health awareness at all six games across the weekend. For more information, visit www.stateofmindsport.org.

You can donate to the State of Mind charity by visiting: https://www.justgiving.com/state-om/donate/