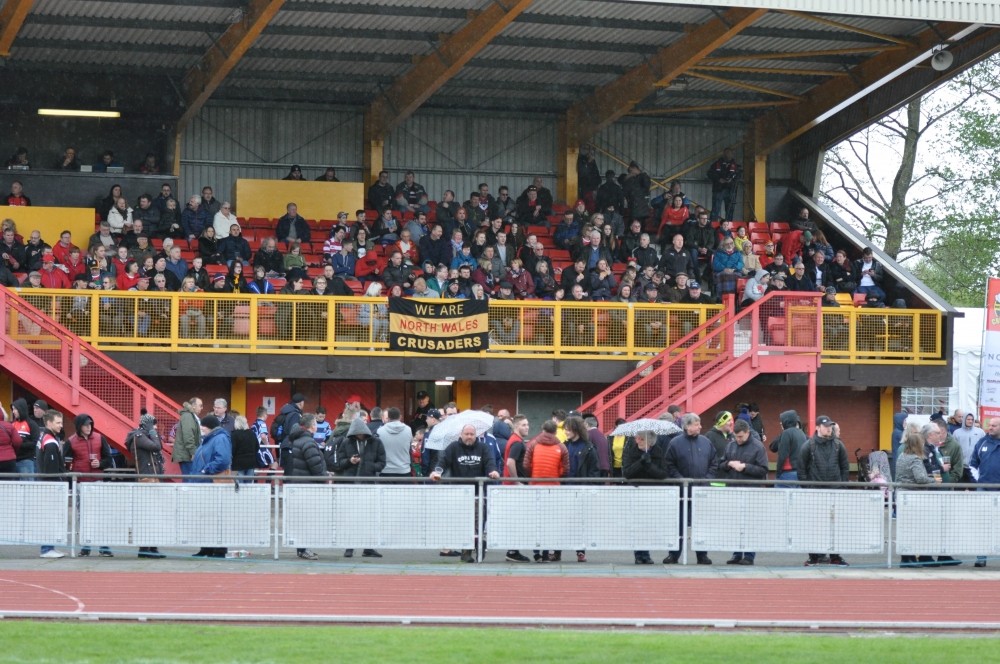 RUGBY LEAGUE fans in North Wales were treated to a double-header at Queensway Stadium on Good Friday.

As a curtain raiser, local amateur clubs Flintshire Falcons and Chester Gladiators took the pitch for a friendly fixture.

However, friendly isn’t the best word to describe it; it was clear that local bragging rights were at stake and fans inside the stadium watched a fantastic contest.

Although the Falcons found themselves 14-4 down at half-time, they had their fair share of possession and were more than a match for their opponents. Chester, however, were clinical and scored tries through Chris Jones and Joel Gibbs.

After the restart, it was a different story; Flintshire dominated for large parts of the match and scored a number of tries in the final 15 minutes to clinch a well-deserved victory.

Junior players from both clubs were then mascots for both Crusaders and Toronto as the two sides walked out on to the pitch.

Given the visitors’ recent form and that they boast names such as Sean Penkywicz, Ryan Bailey and Fuifui Moimoi in the ranks, everybody would have had their money on Paul Rowley’s men.

And it proved to be the case, as Toronto established a sensational 60-0 half-time lead and were averaging a point and a half per minute.

Although Crusaders steadied the ship in the second-half with help from the North Wales driving rain, the damage had already been done.

The Wolfpack got off to the best possible start as they went over for five tries within the first 15 minutes.

First, Craig Hall made the most of a dropped ball to score under the sticks, before a kick bobbled up for Gary Wheeler to walk in for a try.

A Blake Wallace effort and further tries for Wheeler and Hall – all from close range – followed as Toronto established a 30-0 lead.

The hosts very nearly responded, but Simon Atherton’s offload near the line was thrown forward after Crusaders had broken the line down the right wing.

Adam Sidlow then forced his way over after attacking the left edge, before interchange Rhys Jacks darted over from close range.

North Wales had another short spell of possession, but Toronto soon turned defence into attack as Quentin Togag’e broke down the wing and found Hall in support.

With the half-time hooter fast approaching, the Wolfpack added a further two scores, as Fuifui Moimoi bulldozed his way over and Liam Kay finished a nice move in the left corner.

Togag’e went over for two close range scores, set up by the impressive Gary Wheeler, within six minutes of the restart and, from there, you had to feel sorry for the Welshmen and wonder how many points Toronto were going to score.

However, aided by the wet conditions, Mike Grady’s men managed to turn the match into more of an arm-wrestle and, despite Toronto’s heavy possession, managed to keep their opponents to minimal opportunities in the final half an hour.

North Wales thought they were over at one point through Callum Mulkeen, but referee Brandon Robinson ruled a knock-on in the corner. Television replays, though, show that it should have been given.

As the game began to draw to a close, the Wolfpack added two further tries to reach the 80-point mark to rub salt into the wound.

Craig Hall squeezed over in the left corner after they had shifted the ball from right to left, before Greg Worthington got in on the act with a similar effort.