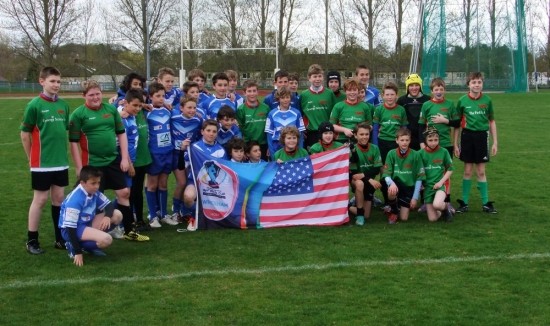 Queensway Stadium played host to a feast of rugby league last weekend as it welcomed some very special international guests.

A touring party of youngsters from the French town of Cahors were in Wrexham to take on Wales Rugby League U14s Development Squad and the Wrexham Bradley raiders U12s team..

The fixture was organised with the help of WRL President Mike Nicholas, who has forged strong links with the French side.

The fixture also marked the debut of the Wrexham Bradley Raiders U12s and there was a sense of occasion, with the Mayor of Wrexham greeting both sets of players before the kick-off.

Despite the team coming together just three weeks ago they gave a good account of themselves against their experienced French counterparts, losing the match 60-20.

The home side scored four very impressive tries and showed plenty of promise in their debut match. However Cahors ran out deserved winner, with several outstanding performances from the French youngsters

The U14s clash was another entertaining clash, with both sets of players refusing to back down in a physical and skilful contest.

The North Wales pack laid the foundation for 30-10 victory over Cahors U14s.

Cahors were given a warm welcome by the North Wales public and Community Rugby League Coach Allen Jones hopes to build stronger links with the tourists, who hail from the South of France.

“Today showed just how far the game of Rugby League has come on in North Wales in the past 12 months. Both fixtures were fast, tough and played in the best spirit of Rugby League.

“Everyone involved with Cahors was a credit to the club and town. Their Cahors U12s were probably the best-drilled and most skilful side I’ve seen in that age group. They played the game the way it should be played and they were a joy to watch at times.

“The U14s game was a really competitive match. The North Wales boys did the basics right and they fully deserved their victory. Cahors suffered a few knocks in this fixture but they never gave up and kept going right until the end.

“Today was a great occasion for grassroots rugby league in North Wales. The passion of the players and coaches from Cahors was infectious and we will keep in touch to see how each others teams are progressing. Hopefully this will become a regular fixture for the future.

“We would like to thank Mike Nicholas, who was instrumental in fostering the link with Cahors, as well as Wrexham Council and Wrexham Bradley Raiders for their continued support of Rugby League.”