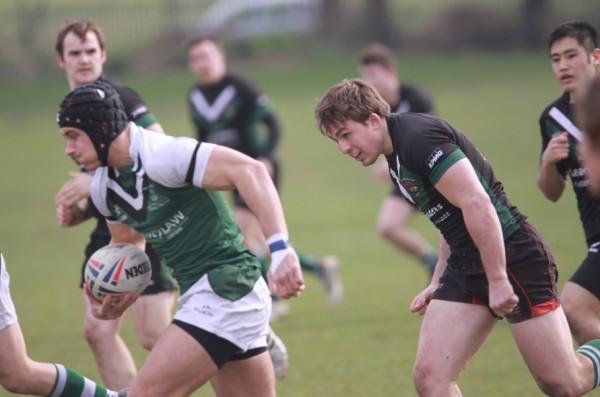 Five tries for second row forward Scott Morris, in only his fourth ever game of Rugby League, made sure that Swansea University beat Exeter 48-18 in the BUSC Western Conference Cup Final.

His, and Swansea’s first came in under two minutes after he made a clean break and sprinted 50 metres, avoiding a few tackles, to score under the sticks. George Smith converted.

Gareth Thomas added the second on 10 minutes and six minutes later James Smith added the third in the corner. George Smith goaled to make it 16 points in as many minutes.

Ali Power hit back with an Exeter try on 22 minutes but two very quick tries for Swansea opened up an insurmountable gap.

Bryn Reynolds finished off a long passing move on 26 minutes as the Exeter defence was badly out of position before Morris ran in his second from kick-off. George Smith converted both.

Aled Jones scored another consolation for Exeter but Morris completed his hat-trick just before the break to make the score 32-8.

Two minutes into the second half and Morris darted down the wing for his fourth try, scoring his fifth in the 65th minute.

However Exeter’s Power wasn’t going to let Morris take all the glory. He scored two more tries of his own in the second period to complete his hat-trick. Xander Seddon converted the final try, Exeter’s only successful kick of the game, to complete an entertaining encounter but in all a successful one for Swansea as they competed a treble of trophies for 2013-14.

Despite having a number of South Wales Scorpions first team players in their side, University of South Wales went down 18-4 to Leeds Met 2nds in the BUSC Trophy Final.

Yousif Suliman scored the only Welsh try of the game on 32 minutes but Fraser Marijoribanks’ try just on 39 minutes made sure that they went into the break ten points to the good.

Cauldfield claimed his second on 53 minutes and although his team-mate Chris Ross was sinbinned with 16 minutes to go, there was no further scoring as both defences excelled throughout.