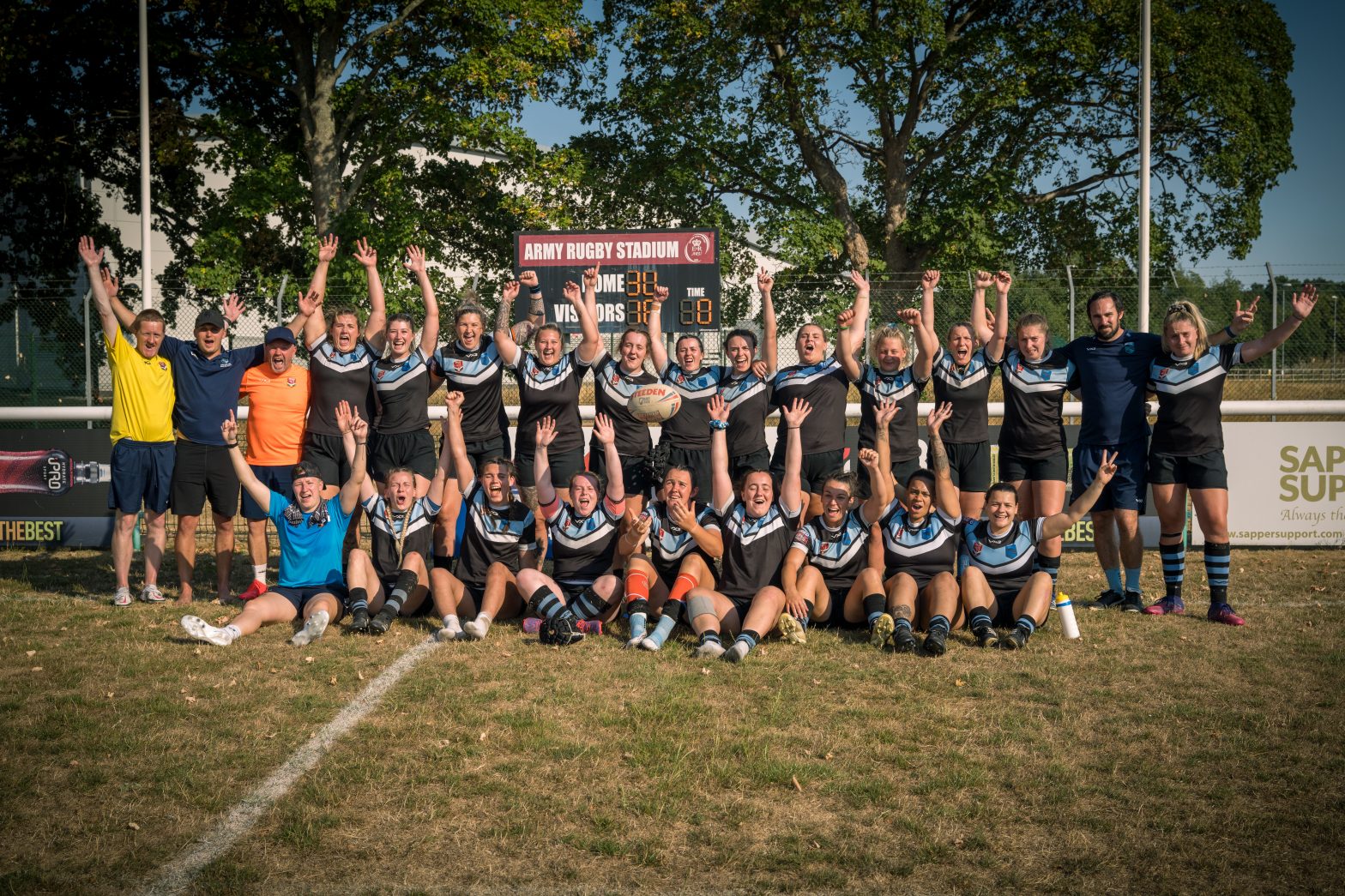 Cardiff Demons qualified for their second successive Betfred Women’s Super League South Grand Final after a 30-16 win over a strong Army side. The Cardiff 20-player line up contained 15 full Wales internationals and one of them, Molly Reardon, gave them the lead with an unconverted tenth-minute try. They levelled on 21 minutes through the only non Welsh international try scorer on the day in Jemma Greening, converted by their captain Kayia Glynn. After that, the Welsh took over and three tries in the last ten minutes of the first half gave them a 20-6 lead at the break – Brittony Price, Charley Mundy and Rosie Carr going over with Mundy converting twice. The Army fought back in the early stages of the second half and two tries from Bethan Dainton brought the score back to 20-16 on 53 minutes. It was a nervy end, but two tries in the last three minutes, from Eleri Michael and Bryonie King, the second of which was converted by Mundy, saw Cardiff through. Amberley Ruck was named player of the match.

They’ll face London Broncos in the final at Cross Keys on August 27 after their very convincing 44-6 win over Bedford Tigers. Emily Hughes, who was named player of the match, scored one of the tries, with Kathryn Salter also starring.

In Women’s Super League Group Two, two tries and a goal for Fern Davies in her final game for the club, helped her Warrington Wolves side to a 72-6 win over Barrow Raiders and secured them top spot in the final table. Meanwhile in Group One, Carys Marsh was in the Wigan side that lost 33-10 at league leaders York City Knights.

In the Championship, Tom Hopkins starred for Barrow in their 30-12 victory over a Batley Bulldogs side in fine form. Will Evans and Curtis Davies were in a Whitehaven side defeated by Widnes who featured Matty Fozard. Former Wales captain, Craig Kopczak scored a try in Featherstone’s 72-6 thumping of Dewsbury. London Broncos’ march up the table continued with a 38-12 win over now-relegated Workington. Dalton Grant starting for the Broncos with John Hutchings appearing for Workington. Finally, in Monday night Championship action, Elliot Kear kicked two goals, with Rhys Evans, Chester Butler and Ant Walker also helping Bradford Bulls to a 20-14 victory over a York City Knights side containing Bailey Antrobus.

In League One, Rhodri Lloyd and Paddy Jones started in Swinton Lions’ 94-6 thumping of West Wales Raiders who again featured Joe Burke as well as a number of other Welsh qualified players. Lloyd scored a hat-trick of tries, with Jones adding one. Cobi Green and Luke Thomas featured for Rochdale in their 34-14 victory over a Cornwall side who featured Charley Bodman and Will Odgers. Owen Restall started on the wing for Oldham in their 60-6 victory over London Skolars.

In Australia, Bradman Best scored a try for Newcastle Knights with Tyson Frizell also playing as they went down 28-10 at Brisbane Broncos. In the Brisbane A Grade competition, James and Ollie Olds were again in action for Diehards FC but they lost 20-8 at Bulimba.