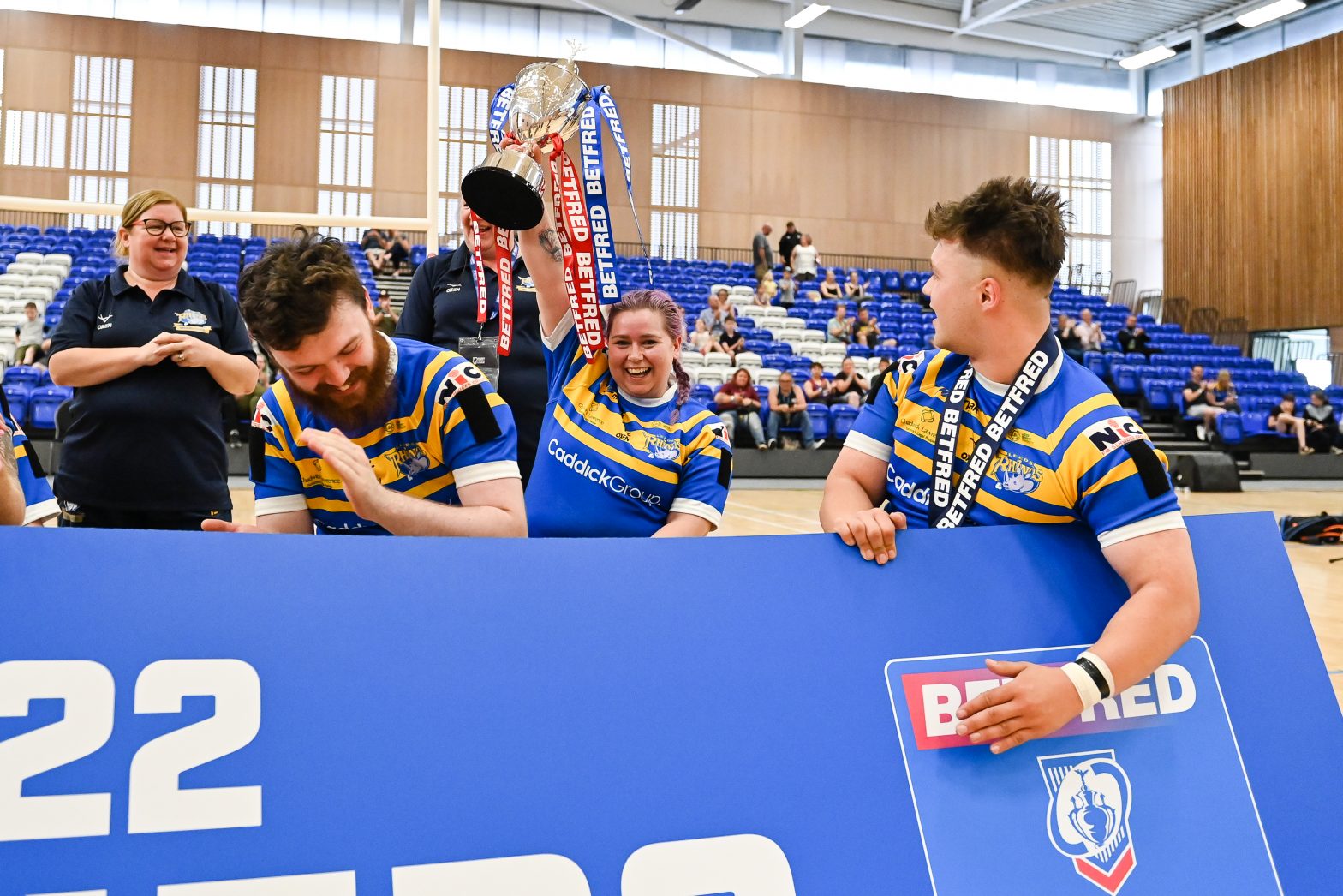 Jodie Boyd-Ward cemented herself as one of the most successful female Rugby League players ever as she was a part of the history-making Leeds Rhinos side that lifted the Betfred Challenge Cup in a very hard-fought and entertaining game live on BBC against French giants, Catalans Dragons.

On a historic day for the game, the Dragons were making their first appearance in the Final and – after the national anthems and Abide With Me – a moment’s silence was observed in memory of the much-loved broadcaster and Rugby League fan Harry Gration who passed away the day before. Following an early Rhinos try, the Yorkshire outfit were quickly on the back foot following three tries to the Dragons. But, in a typically end-to-end clash, a brace of tries and penalties saw Leeds go into the half time break 20-16 up. Just after the restart, Boyd-Ward extended Leeds’ advantage finishing a well-worked team move which saw her start the play and the ball go through every Leeds player before she crossed the white wash. Leeds took control in the closing stages and rounded off an impressive 48-34 victory and securing their third-successive Cup win.

Nine more members of the current Wheelchair train-on squad featured in the day’s earlier kick-off, when North Wales Crusaders squeezed a 58-45 victory in the first round of the ‘Middle Fives’ against Championship North winners, Hereford Harriers. The Crusaders lined up a full international side with five Welsh and one Ireland international. Wales captain finished the game with a double whilst Scott Trigg-Turner ended the game with a quintuplet of tries, Ireland captain, Peter Johnston Jnr finished with a solitary try whilst Stephen Halsey, in his first game of the season finished with two tries and nine goals. Mason Baker and Ricki Davies also featured for the side. The Harriers brought in Mark Williams from Wigan Warriors, whilst Martin Lane featured against his parent club, meaning he is now ineligible to feature for the Crusaders outfit again this season. Williams topped off his second Harriers appearance of the season with a hat-trick of tries, Martin Lane secured himself a solitary try, whilst Wales vice-captain, Gary Preece secured himself a personal tally of 19 points via a hat-trick of tries, three goals and a first-half drop-goal. Wales veteran, Alan Caron also featured for the Harriers.

Coming off the back of two Wales Women’s international matches, 13 featured for Cardiff Demons in their 58-0 win over Bristol Golden Ferns in the Women’s Super League South. Wales skipper Bryonie King again led from the front with a hat-trick of tries, with Eleri Michael and Brittony Price and Sara Jones scoring twice. Katie Carr also went over for a try. Amberley Ruck kicked well, converting seven of the 11 tries. The other already capped players to feature on Sunday were Rosie Carr, Rhi Parker, Molly Reardon, Charley Mundy, Joeanne McGuire, Lauren Aitken and Ffion Jones. The squad was 100 per cent Welsh with the uncapped players being try scorer Savannah Picton-Powell, Leanna Mayback, Ffion Jenkins, Chelcey Greasley, Sophie Solari and Lowri O’Raw. Featuring for Bristol were Ffion Griffiths and Rhiannon Laugharne.

Elsewhere in the Women’s Super League, Fern Davies helped Warrington Wolves to a 54-0 over Bradford Bulls, but Carys Marsh was on the losing side with Wigan Warriors as they were beaten 46-0 at home to York City Knights.

In the men’s Super League, Regan Grace and Gil Dudson both returned from injury after missing the Wales international in France. Grace scored a try for St Helens in their 42-12 victory over Leeds Rhinos, but Dudson’s Catalans Dragons were edged out 17-16 at Castleford Tigers. In Super League reserves, Lewis Hall, Jacob Lee and Joseph Coope-Franklin were all in the Salford side as they were beaten 44-10 at Wigan Warriors. Finally, James McGurk played for Newcastle Thunder Reserves in their 22-16 victory over Wakefield Trinity. Kyle Evans scored a hat-trick of tries for Wakefield.

In the RFL Championship, Caleb Aekins also returned from injury to help Leigh Centurions to a 58-4 win at Sheffield Eagles. They’re now three points ahead of nearest rivals Featherstone Rovers at the top of the table. Fresh from their Wales debuts, Bailey Antrobus’ York side overcame Will Evans’ Whitehaven in Cumbria, as Antrobus scored a try in their 40-16 win. Newcastle’s first team also tasted success against a Cumbrian team, beating Workington Town 66-22 at home, with Connor Davies in the Town side. Two other Welshmen up against each other were Matty Fozard of Widnes Vikings and Jude Ferreira of London Broncos, with the Vikings tasting a narrow 26-22 home victory after being down at half-time. At Bradford, Chester Butler scored a brace of tries and Elliot Kear went over once as they beat Dewsbury Rams 48-6. Anthony Walker also came off the bench for the Bulls. Finally, in a Monday night bruiser at Barrow Raiders, Tom Hopkins played for the home side as they went down 43-18 to Halifax Panthers.

In League 1, Charley Bodman and Will Odgers helped Cornwall to their first ever win as they beat West Wales Raiders 24-4 in Llanelli. Joe Burke came back from Wales duty to feature for the Raiders whose head coach Ashley Bateman was forced to name himself on the bench as they had three players on Student international duty and another ten injuries. A further eight Welsh qualified players turned out for the home side. Our other semi-professional club, North Wales Crusaders, also tasted defeat, losing 26-18 at home to Doncaster, with Rob Massam playing on the wing for Crusaders. However there was success for a Welsh trio at Swinton Lions as Paddy Jones came off the bench to score two tries at London Skolars in their 48-22 win. Mike Butt also grounded, with Rhodri Lloyd captaining the side. Finally, Cobi Green was in try-scoring form for Rochdale Hornets as they won 32-24 at Hunslet. Gavin Bennion also started for the Hornets.