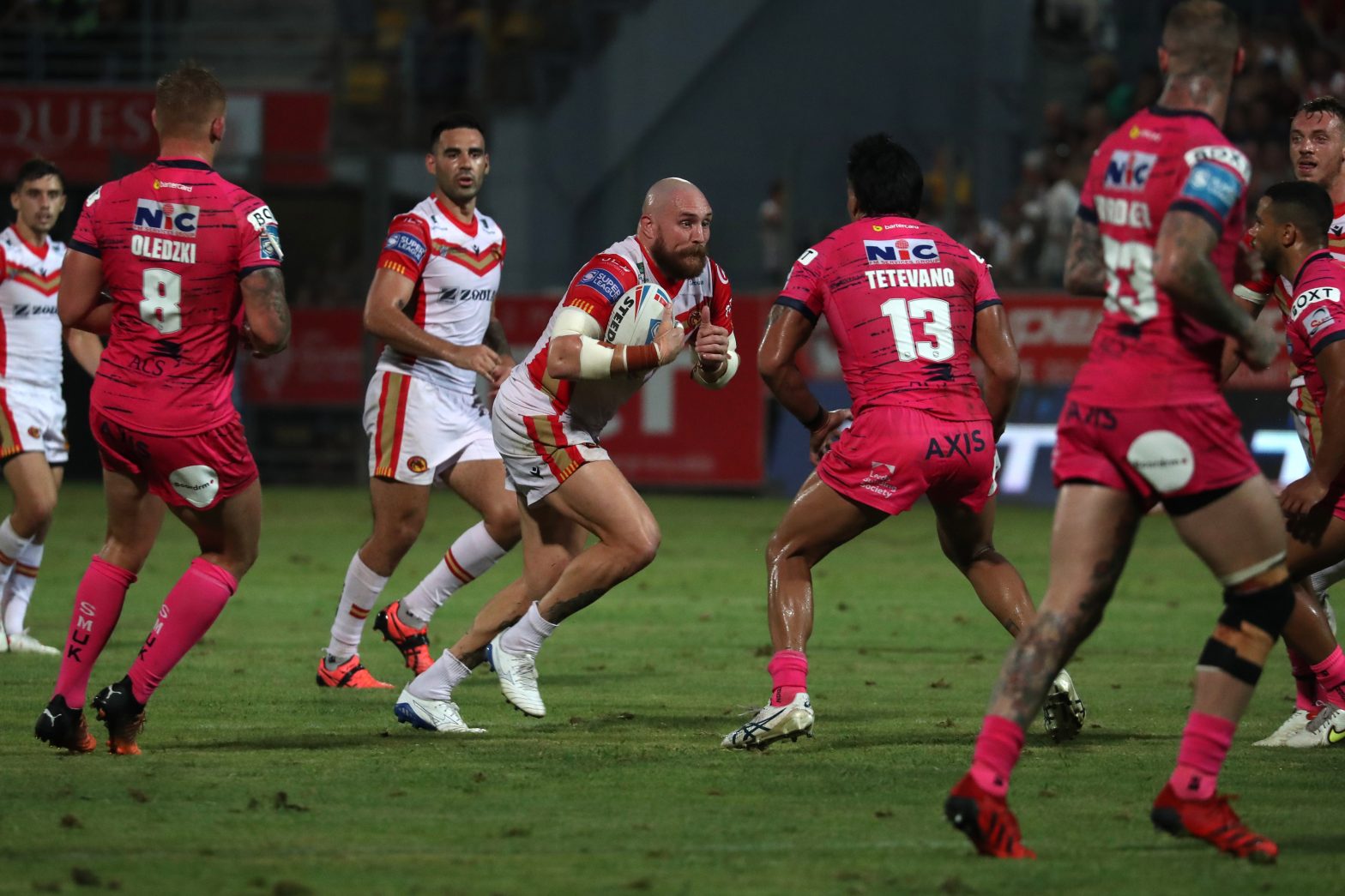 Gil Dudson has been banned for three games following his red card for Catalans Dragons in their 20-10 home defeat to Leeds Rhinos. Catalans’ season is also now over following that elimination play-off defeat, but Salford remain in the hunt for Grand Final glory after their 28-0 win at Huddersfield Giants. Rhys Williams was in the 21-man squad for Salford but didn’t get selected in the final 17. In the Super League academy, Josh Lynch played for Warrington Wolves as they lost 23-12 to Leeds.

In League 1, the play-offs have also started and four Welsh internationals were up against each other as Rochdale Hornets beat Oldham 38-24 to end the Roughyeds’ season. Gavin Bennion scored two tries for the Hornets, with Luke Thomas coming off the bench. Owen Restall ran over for one for Oldham with Calvin Wellington also starting. Rochdale travel to North Wales Crusaders this week, with the Colwyn Bay based side last weekend missing a chance to straight to the semi-finals as they lost 26-12 at home to Doncaster. However Rob Massam of Crusaders did score his 198th career try.

🚨 AFTER THE HOOTER | Hear the immediate reaction from Craig Kopczak on his 400th career appearance and Josh Hardcastle after our win away at Halifax on the final game of the season.#UTR | #BlueWall pic.twitter.com/rbOYfuj9sD

In the Championship, it was the final round of regular season matches and Leigh officially lifted the league leaders trophy in style after their 64-6 win over Batley Bulldogs, Caleb Aekins scored one of their tries. Leigh’s closest rivals this season have been Craig Kopczak’s Featherstone Rovers. He’s now reached 400 career games (we make it 402), and was in action this weekend in their narrow 24-22 win at Halifax Panthers to cement second place. Barrow Raiders, Batley and York City Knights complete the top six, with York continuing to shrug off a recent 100 point drubbing as they hammered bottom side Workington Town 74-12. John Hutchings was in action for Town. Welsh internationals were up against each other at Bradford Bulls as Wales boss John Kear returned to Odsal with Widnes Vikings with the visitors winning 23-10. Elliot Kear kicked a goal for Bradford, whilst Matty Fozard scored a try for Widnes with Luis Roberts also starting. Both of these once proud Super League clubs will be disappointed not to be in the mix for the title. Also completing their domestic season last weekend was Curtis Davies, who starred for Whitehaven as they beat Newcastle Thunder 40-24 and Dalton Grant, whose London Broncos side lost 30-20 at home to Barrow.

In the only Wheelchair Rugby League match last weekend, North Wales Crusaders ‘A’ completed an invincible half of the season by coming from 12 behind to defeat local rival Rochdale Hornets, 52-40 in the final Championship North game of the regular season. The Crusaders, fielding four debutants, all from their youth and school initiative, fought back from an early 12-0 deficit. Tries from uncapped Wyatt Jones and American heritage debutant Leo McCabe, playing alongside his brother Fionn, brought the scores level. However, a further two tries to the Hornets and another for Daniel Clarke of the Crusaders, with John Doyle adding four points off the tee and fellow Wales international, Ricki Davies adding a further two points, took the game into half-time, with the Hornets leading 24-18. The second half is where the Crusaders took control of the game with Clarke adding another try, Mark Drakeford and a debutant Jack Atkins each adding a try. Ricki Davies crossed for a hat-trick of tries whilst Mason Baker missed only his first conversion attempt of the season but still managed to bag himself a total of 10 points from the tee. This victory saw Crusaders ‘A’ a second place finish in the Championship North and have qualified for the Grand Final, whilst over in the Middle Fives, the Crusaders’ first team will take on Warrington Wolves, with the winner facing off against Hull FC in the Grand Final.