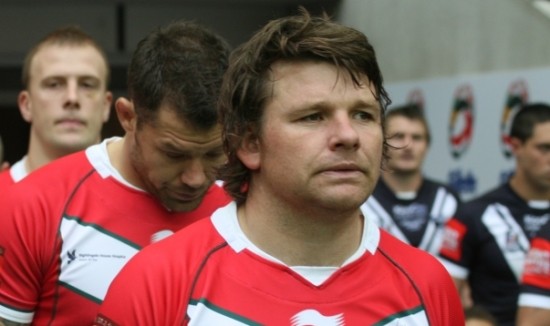 Following independent medical recommendation, the Warrington Wolves talisman halfback has been forced to retire. Numerous scans and consultations have highlighted the damage sustained to Lee’s neck, leaving him with no option but to retire from playing. Lee will now make the transition into the Wolves coaching set-up.

The illustrious halfback has since gone on to make 425 appearances for the Primrose and Blue including a club record achievement by becoming the leading points scorer in Warrington’s history with 2586 points.

A well-respected member of the team Lee has worn his heart on his sleeve throughout his Warrington career playing with recognisable pride and passion for his club.

His debut back in 1997 earned him heritage number 955 and a place in the club’s history books. He’s been a constant through the highs and lows; one of the few remaining players to have experienced the move from Wilderspool to The Halliwell Jones Stadium.

With his professional Warrington career spanning 17 years the timely launch of his autobiography ‘Off The Cuff’ gives us an insight into this life and career in his own words; including the recent Challenge Cup successes, being named Lance Todd Trophy Winner 2010 and Warrington’s transition to now being one of the giants of Super League.

Following his retirement from International rugby for Wales he turned his hand to coaching his nation’s side; most recently in the Rugby League World Cup 2013.

Briers said: “I feel privileged to have played for so long. Unfortunately it has come to an end but it was going to one day and the doctor took that out of my hands. I’m sad but I’ve got good things to look forward to now with the coaching; my next chapter. It is something I have always wanted to focus on and now I have the opportunity to do that. I would have liked an extra year playing but I now hope to help find the next superstars of Warrington Wolves.”

Wolves’ head of coaching and rugby Tony Smith added:“ On behalf of the Warrington club, its supporters and Rugby League fans I’d like to thank Lee for his contributions to the game. He has brought enormous enjoyment and pleasure to those who have witnessed his skills. I have personally enjoyed watching Lee develop both as a player and a person and look forward to working with him in the next chapter of his career.”