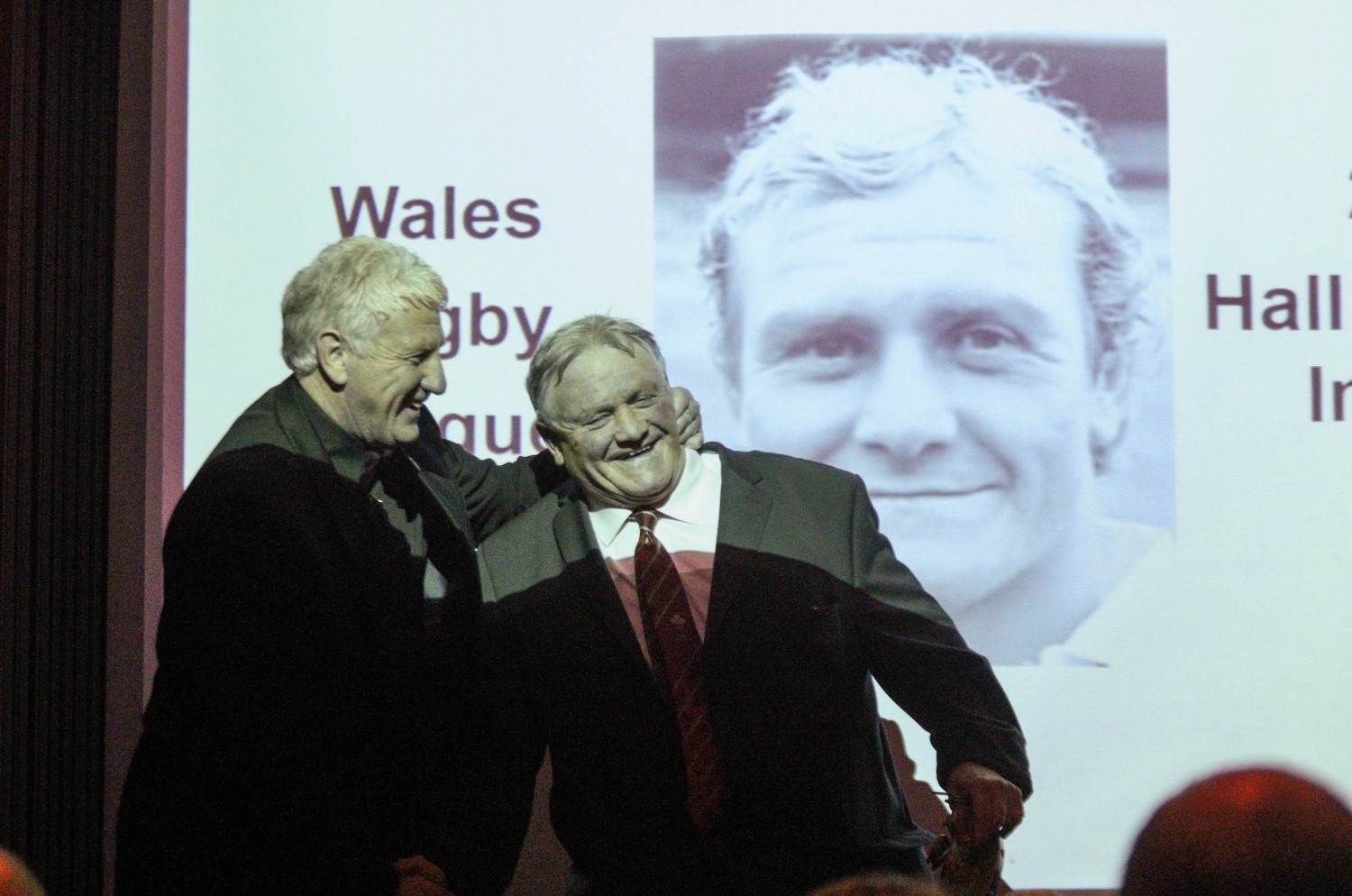 Wales Rugby League’s President Mike Nicholas was inducted into the Wales Rugby League Hall of Fame on Wednesday evening at a celebration dinner at the Village Hotel in Deeside that also saw all three of Wales’ World Cup sides honoured.

Nicholas, born in Port Talbot in 1946, known to almost everyone as “Nicko”, becomes the third inductee into Wales’ Hall of Fame following Billy Boston and Gus Risman, who were chosen last year.

Speeches about Nicholas’ career were given by his good friend Chris O’Callaghan, also from Port Talbot, who he worked with at Wales Rugby League and Celtic Crusaders to name just two, and WRL’s Communications Manager Ian Golden.

Nicholas, 71, has been actively involved behind the scenes for Rugby League in Wales since 1981 when, alongside another former international player Dai Watkins, he helped set up Cardiff City Blue Dragons.

He became team manager for Wales Students in 1989 before having that role for the full Wales side between 1993 and 2000.

He founded South Wales RLFC in 1996 in the first season of summer Rugby League, this particular incarnation folding after the RFL backtracked on giving them a Super League licence, but Mike didn’t give up the expansion programme.

He became president of Wales Rugby League in 2003 and again helped to set up a new competition, the Welsh Conference and assisted in the establishment of three of the clubs – Torfaen Tigers, Bridgend Blue Bulls and Aberavon Fighting Irish – he is still the honorary president of the Bridgend club. Over the last 14 years, he has been at many of the Grand Finals of this competition presenting trophies and medals.

In 2005, he was a co-founder of Celtic Crusaders and helped bring in backers to the club in its early days and he also sat on the board of South Wales Scorpions in their early days as he advised his good friend Phil Davies who set up the club.

In recent years, he has also been heavily involved in junior rugby league development in North Wales, assisting clubs and helping to organise or get clubs into tournaments and festivals. In 2012, he was added to the RFL’s role of honour for his outstanding service to the game.

And just to put an international team value on Mike’s work – around 50 Welsh internationals, including 11 of the current World Cup squad, have been developed through the systems that Mike helped set up over the last decades.

As a player, the Port Talbot-born Nicholas turned out for Aberavon Harlequins, Greenstars and Wizards before signing professional forms with Warrington in 1972 where he made 142 appearances, many of them as captain, and was sent off 13 times. He won six caps for Wales, all of them in the European Championship. He finished his playing career at the Blue Dragons.

“I’ve seen a lot of changes in the 45 years that I’ve been involved in Rugby League,” he said. “We’ve had some ups and downs over the years but I firmly believe that Wales Rugby League is in safe hands going forward with Brian Juliff as Chairman and Chris Thair as CEO – they’ve picked up the pieces and moved it forward.

“This is a big honour for me to be in a Hall of Fame alongside Billy Boston and Gus Risman. It’s the same as when I was added to the RFL’s Roll of Honour in 2012, that too was brilliant.

“I’d like to wish Wales good luck in the World Cup this month and I know they’ll do us proud.”

Most of the Wales squad were in attendance, as were almost all of the Wheelchair squad and a selection of the Students squad, both of whom competed in their World Cups earlier this year.

Wales Students team manager Mark Jones spoke about their three weeks in Australia and how the Welsh players conducted themselves with dignity and honour throughout, whilst Steve Jones, the Wales Wheelchair coach, spoke about the bravery of his captain Mark Williams, who played almost the whole 80 minutes of their final match against Spain with a dislocated shoulder, knowing that his side only had two fit substitutes on the bench. Wheelchair star Claire Cranston was also recognised as Wales Rugby League’s first and so far only female World Cup player and scorer.

All of the Student and Wheelchair World Cup attendees were presented with their caps whilst motivational speeches were given by WRL chairman Brian Juliff and head coach John Kear.

Juliff said: “It’s fantastic that we can stage such an event where all of our World Cup teams can be in one room, I don’t know of many other nations who do this. This dinner was a sell-out primarily thanks to the work of the national side’s media manager Ryan Gould, who did an outstanding job with the organisation.

“It’s also great that we were able to honour Mike Nicholas in this way. It’s thanks to Mike that I got involved as WRL’s chairman in the first place as I saw the good work he and others were doing, and like him I wanted to give something back to the nation that I was proud to play for.

“We run a number of international sides in Wales and it’s a privilege for our country to be in three World Cups this year. Under John Kear our senior side are unbeaten in the last two years and I know that, like our Student and Wheelchair sides, will do us proud. Cymru am byth.”