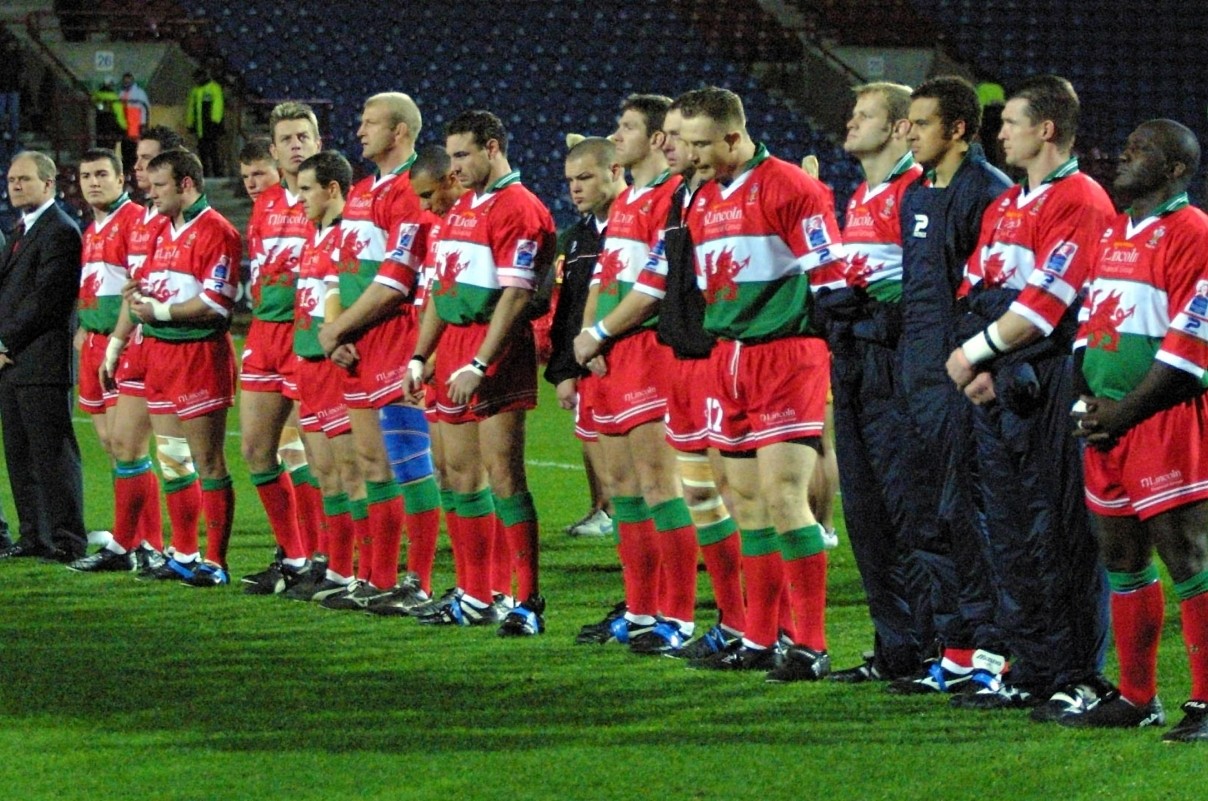 On November 19th 2000, Wales scared World Cup favourites Australia for an hour before eventually going down 46-22. Here, Richard de la Rivière looks back at the game in article originally published in Rugby League World in 2008 and then here. Printed with permission from both parties. Richard features this game in his new book, 100 Days that shook Rugby League, available now. Photo by Dave Williams of rlphotos.com

For nearly an hour, this game shaped up to be the biggest Rugby League shock of all time.

Wales were beating Australia. And at one point in a crazy first half, they were 12 points to the good.

They had three players who had gone to rugby union in their 17 – Jason Critchley, Paul Moriarty and John Devereux. The latter two hadn’t played Rugby League for five years! They also fielded three players from the Northern Ford Premiership – scrum-half Ian Watson, loose forward Chris Morley and big David Luckwell on the bench.

Yet, they took on the seemingly invincible Aussies and gave them the fright of their lives just 24 hours after England had been absolutely humiliated 49-6 by New Zealand.

England’s hammering had typified a tournament that failed to live up to expectations. Poor crowds and atrocious weather had seen the competition largely derided in the media. Surely Wales couldn’t do much to lift people’s spirits?

Well, they did plenty. In a mad ten minute spell in the first half – possibly the most sensational ten minutes in international Rugby League history – they posted three tries before Lee Briers booted two long-range drop goals; all this after Brett Kimmorely and Wendall Sailor had scored early tries to give Australia a totally unsurprising 8-0 lead.

Firstly, Watson took an Anthony Farrell offload to score by the posts with Iestyn Harris goaling. Then, unbelievably, they had the temerity to take the lead when Kris Tassell – an Australian himself – picked up a long Briers ball to score outwide, with Harris converting again.

Then, in the 23rd minute, Harris hoisted a huge bomb and Briers timed his run and jump to perfection to beat an astonished Lockyer to the ball and swallow dive over the line, leaving Harris with a simple goal.

Wales were 20-8 up and the 8,114 crowd could scarsely believe what they were witnessing, although Brad Fittler pulled a try back in the 28th minute to cut the deficit to six points at the break. 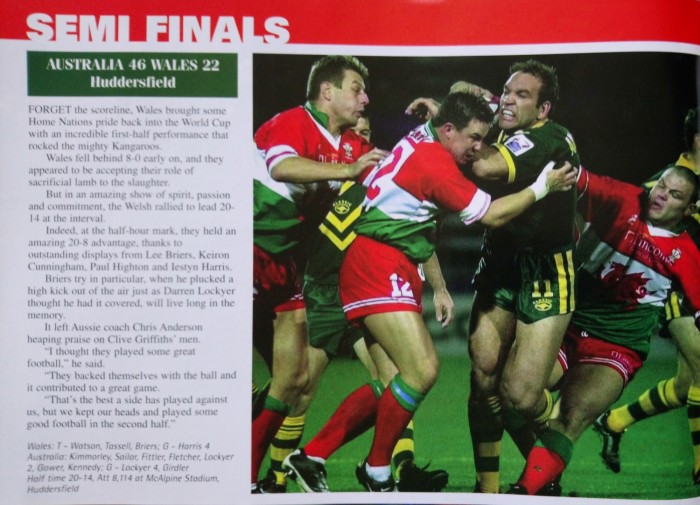 Iestyn Harris kicked the first points of the second half, meaning Australia were two scores behind once again and the Welsh bravely clung onto that lead until the 54th minute when Bryan Fletcher twisted over iin Moriarty’s tackle to score.

But it wasn’t until the 57th minute that the Aussies finally took the lead with Darren Lockyer scoring. Minutes later, Fittler added his second and further tries to Lockyer, Craig Gower and Ben Kennedy gave the Kangaroos a 46-22 win and a place in the final to play Frank Endacott’s Kiwis.

A number of the Welsh were magnificent, not least Briers who, according to League Express, “was simply outstanding in a wonderful effort by his side, producing a memorable try in an astonishing first half.”
Briers himself added later: “Did we believe we could win? Probably not but we knew we could give them a fright and it was one of the proudest days of my career,” he said. “The togetherness and spirit in the team was fantastic. It was a special day despite the eventual defeat.

“I’ve just read Iestyn Harris’s book and he likened the Welsh to a club side. I certainly thought that when I came into the set-up. We didn’t have many players to choose from so there’s continuity there. England have so many to choose from that they sometimes struggle for the continuity and camaraderie which is massive in sport. It’s there straight away with Wales.”

Wales may not have actually done the impossible and beaten Australia, but on that cold Sunday night in Huddersfield they lit up the World Cup.