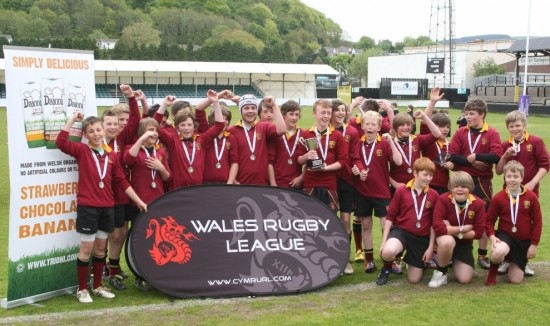 Pencoed were made to work for their win against a spirited St Joseph’s side to become Year 8 Welsh Champions.

They took the lead in the second minute after Josh Raikes caught an excellent cross-field kick. Brendon Thrasher converted well from the touchline.

St Joseph’s hit back on 20 minutes when Christian Mbongopasi sprinted his way through the defence and Liam Derrick converted to make the half-time score 12-6.

Pencoed struck first after the interval, extended their lead to 18-6 after Daniel Jakeway dived under the posts and Thrasher converted.

It was 24-6 when man of the match Liam Walters twisted his way over an outstanding fourth. Thrasher kept up his 100% record.

But St Joseph’s weren’t giving in and struck back through an excellent run from Derrick. The conversion was missed.

They scored again from kick-off when Joel Curtis ran over but in went unconverted and St Josephs were still 10 points behind.

But Pencoed sealed the game as Callum Palmer scored from close range in the final minutes. The kick just fell short.

And they still had time to go over again through Matthew Wilmott to make the final score 32-14.