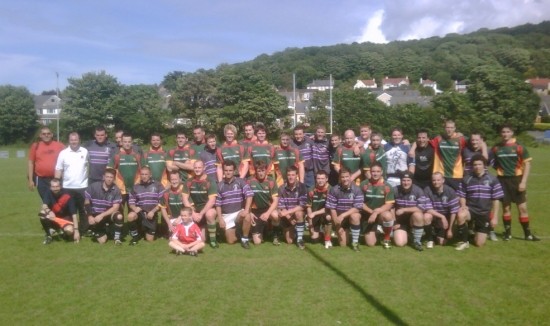 The recent North Wales 9s Cup Competition was a huge success with great feedback and provided a good taste for this up and coming North Wales Conference League.

“This weekend will see four community clubs play in a competitive structured league which is credit to all the great hard work in the off season by the volunteers. We must remember that things don’t happen overnight however we are making big strides in a very short period of time and one thing for sure is it is a pleasure to work with such rugby league enthusiasts and in sport we sometimes forget the work volunteers do on top of their own commitments.”

If you would like to support these North Wales clubs please come down to Bradley Parc this Saturday 3pm KO where Wrexham Bradley Raiders play Prestatyn and Rhyl Panthers, and Conwy Celts play Dee Valley Dragons (both teams pictured above from a friendly last year) at Colwyn Bay Rugby Club 2pm KO.

Conwy Celts will be looking for another successful year after recording three wins out of a possible four during friendly games in 2011. They put a decent shift in at the North Wales 9’s tournament held at Queensway back in early April, but couldn’t rival for the trophy, recording just the one win against Wrexham Bradley Raiders. The Dragons likewise will be looking to improve on their efforts at the 9’s tournament and this is certainly set to be a well-contested encounter.

Head coach of the Conwy Celts, Ray Caldwell is looking forward to the formation of the North Wales Conference and believes it can create a platform for both the players and the clubs to move forward.

He said, “We now have the structure in place to promote the talented individuals that we know exist in this area. As a club we hope we can give these players the skills needed to continually improve themselves and in the process, increase our clubs standing in the game of rugby league. We hope everyone enjoys the rugby that is played by us and the standard will continue throughout the forthcoming season.”

Wrexham Bradley Raiders meet Prestatyn and Rhyl Panthers for the second time in a matter of weeks, as both clubs fought out in a friendly match which was abandoned at half time due to adverse weather conditions. The Raiders will have a strong squad of around 30 players, with an impressive 20 in training regularly.

Dave Cottam, head coach of the Raiders feels that they can prove a lot of people wrong this year and be a force in the competition. “We are confident in giving everybody a good game in this league, providing we don’t lose any key players. The boys are itching to get started and were very disappointed that the game was cancelled last weekend.”

“This is an exciting time for rugby league in North Wales and I think you will see it grow at a rapid pace. We have one or two knocks from the abandoned game with the Panthers a few weeks back, but they should be fit for Saturday’s game.”

Prestatyn and Rhyl Panthers were of course victorious in the 9’s tournament and played some very attractive and expansive rugby league on the day. They’re a club growing and improving at a rapid pace and are certainly one to watch out for in this years competition.