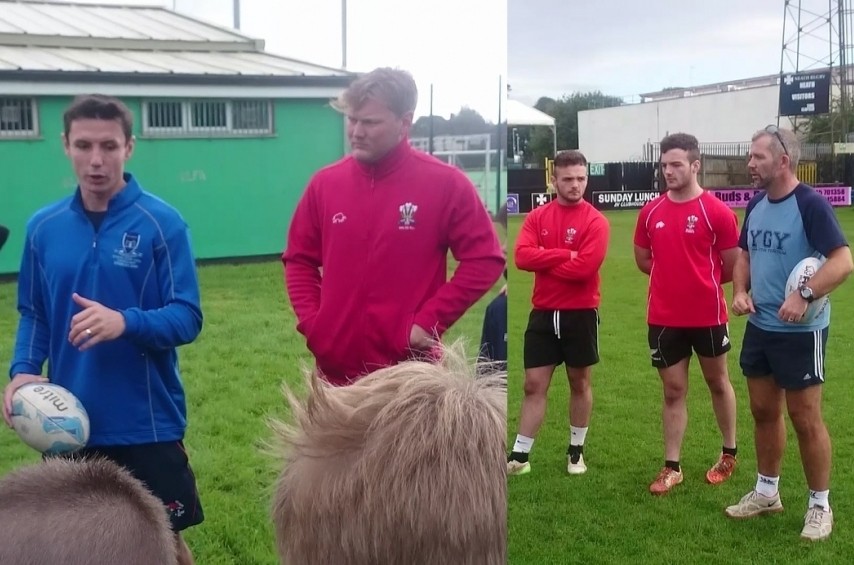 Wales Rugby League stars have been assisting their former schools as they prepare for national Champion Schools Cup Finals in London this weekend.

On Friday, Ysgol Gyfun Ystalyfera from the Swansea valleys take on St Peter’s School from Wigan in the Year Final at Richmond RFC (kick-off 1pm) before Cardiff school Ysgol Gyfun Gymraeg Glantaf take on Wade Deacon from Widnes in the Year 7 Final at Wembley Stadium on Saturday (kick-off 1.20pm) in the traditional curtain raiser before the Rugby League Challenge Cup Final.

Full Wales international Lewis Reece, now playing for Gloucestershire All Golds, is a former pupil at Glantaf and the 24-year old has been only too delighted to lend a hand.

“I helped to take a session on Wednesday,” he said. “We spoke about the basics of Rugby League, the mentality you need, especially around the defensive part of the game. Also small things like the wrestling, the play-the-ball, but mainly I said for them to just enjoy themselves and give their all. I think they’ll win it.

“A lot of players in this Final have gone on to great things, three of my Wales team-mates, Rhys Evans, Ben Evans and Olly Olds, played at this stage 10 years ago, so hopefully we’ll be seeing some future Wales internationals from Glantaf this year.”

“This is only the school’s second year playing Rugby League,” he said. “We fielded a year 10 side last year and we started our year 7 side this year.

“We’ve fitted in about five or six training sessions over the last couple of weeks and it’s become more intense this week.

“I’m confident that we’ve got the skill. I’ve no idea what Wade Deacon are like but I do know they’ve been playing a lot longer than our boys who have only been playing for a year.

“They’re very young so their achievements haven’t really sunk in yet. But playing at Wembley will be something they’ll remember forever. We’re told there could be about 20-30,000 people watching our game so this will be the first taste of hopefully what is to come for them in their sporting careers.”

Helping out Ystalyfera are 18-year old twins Connor and Curtis Davies who are now playing for South Wales Scorpions. Having played Rugby League since aged 11 in the Champion Schools competition and playing in a Year 10 Final themselves in 2012.

“We’ve enjoyed coming back, having a look and helping out with training,” Curtis said. “The school has always had good rugby teams and I hope they do well.”

Connor adds: “Speaking to Mr Bebb, he says that he’s confident that they have the ability to win. We lost our Final to a school in Wakefield a few years ago and a few of the boys have gone on to bigger and better things in Super League. Anything’s possible.”

Ystalyfera coach Ioan Bebb, a former Welsh Student international and professional with the old South Wales RL club, says that his players have worked hard and after cruelly going out in the semi-finals of last year’s Year 7 competition, are aiming for national honours in Year 8.

“We’re all very excited,” he said. “It’s a fantastic opportunity for the boys, they’ve worked really hard all season. It’s a bit difficult with a six-week holiday just before the final but they’ve prepared as well as they can do. They’ve got the ability, it’ll just come down to how switched on they are on Friday.

“I was speaking to them about the big future they can have in Rugby League. Connor and Curtis Davies are good examples of those who have come through the Wales Rugby League school systems, they’ve gone on to play for South Wales Scorpions and have won international honours with Connor the new captain of the Wales under 18 side.

“We’re making a weekend of it in London. Our Final on Friday is our main focus but as soon as that game is finished, we’ll be there to enjoy the Challenge Cup Final and to cheer Glantaf to hopefully a third Welsh victory of the weekend, as we also wish North Wales Crusaders good luck in their match at London Skolars on Friday night.”

Full live coverage in English and Welsh can be followed on Twitter on both Friday and Saturday at https://twitter.com/walesrugbyl/.