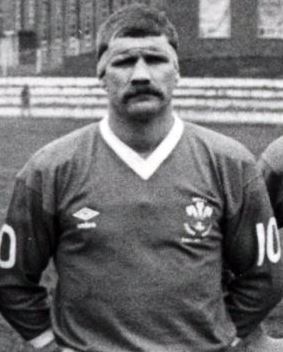 Heritage #306, Glyn won seven caps for Wales, making his debut against France in 1978, and one cap for Great Britain, playing against New Zealand in 1980.

Born on April 11, 1951, Glyn was educated at Cwmddulais Secondary School and started off in rugby union with Seven Sisters. He won youth caps for Wales before joining Neath in 1970, where he became one of their greatest ever forwards. He played for Wales B in 1971, and a year later, he helped Neath to win the inaugural WRU National Cup. In December 1972, he won the first of his 12 full WRU caps, playing in the narrow 19-16 loss to the All Blacks at Cardiff Arms Park. He won Five Nations honours with Wales in 1973. He went on to win further representative rugby union honours with Neath & Aberavon Combined, West Glamorgan, West Wales and Crawshays before turning professional with Widnes in 1977. He was captain of Neath at that time.

In rugby league, Glyn initially played a trial match for St Helens, but didn’t sign at the time, and returned to Neath. When he eventually turned professional, he had an equally successful career in rugby league as he did in union, making 240 first class appearances and scoring 24 tries. First with Widnes, where he made 140 appearances for the “Cup Kings”, scoring 18 tries. There he starred as prop regularly alongside fellow Welshman Jim Mills. He was in Widnes’ 12-3 victory over Wakefield Trinity in the 1979 Challenge Cup Final, and came on as substitute in the 18-9 victory over Hull Kingston Rovers in the 1981 Challenge Cup Final. He also won Lancashire Cup honours, playing in the 1978 and 1979 Final victories, both against Workington Town, 15-13 and 11-10 respectively. In the RFL League Cup, he played in the 1979 Final win where Widnes beat Warrington 16-4.

Further League Cup winners honours came when he joined Wigan in 1981, playing in the 15-4 win over Leeds in the 1983 Final. He made 63 appearances for Wigan, scoring twice, before joining Warrington in the 1984-85 season, making 15 appearances and scoring three tries. He finished his career with Rochdale Hornets in the 1985-86 season, playing eight times and scoring one try.

He remained in the north of England, settling in Widnes and coaching local side West Bank Bears, but was still highly recognised by the Neath Rugby Supporters Club, who installed him in their Hall of Fame in 2016.

Wales Rugby League chairman Brian Juliff, who played alongside Glyn for four of his Wales appearances, said: “Glyn was a good friend and teammate to me at both Wales and Wigan. He was a great character, an outstanding athlete and fearless competitor who was respected and admired throughout rugby league and rugby union. We will all miss Glyn’s presence, sense of humour and infectious personality. Condolences to all of Glyn’s family and RIP to a top man.”