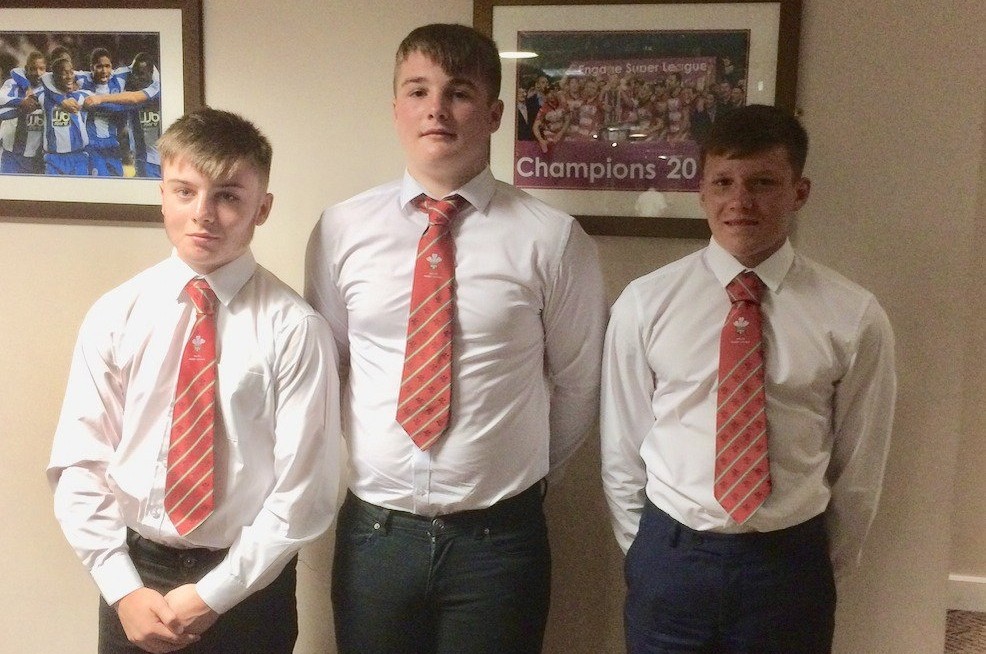 Seventeen under 15s and 16s Rugby League players from Wales have now been snapped up by Super League sides for their academy systems.

This includes 11 of the Wales under 16 side who beat England last week for the first time ever, winning 18-10 in Cardiff.

Twins Ewan and Ieuan Badham from West Wales Raiders and Milford Haven Comprehensive School, who had already been scouted by City of Hull Academy before the Wales games, are now joined by Raiders team mate Iestyn Hopkins who has been attending Ysgol Gyfun Ystalyfera.

A further five under 15s from the Raiders, who didn’t play against England, have also signed at Hull. These are Morgan Chell (Ysgol Dyffryn Taf), Trystan Rawlings, Keiron Lewis and Alex Jones (all Ysgol Gyfun Ystalyfera) and Joe Hawkins (Cwmtawe Community School).

The signings have resulted from the partnership that West Wales Raiders have created with Hull coupled with the players’ performances for Wales under 16 or the West Wales regional side in the recent Origin games.

In addition, earlier this week, Aber Valley Wolves trio Ewan Challenger (who was in the Wales squad this year but wasn’t in the side against England), Kyle Huish and Jacob Lee signed scholarship forms for Wigan Warriors (see photo above). The trio were scouted by the Warriors throughout the Wales under 16s programme, which also included two wins over Ireland and a joint training session against the Wigan scholarship side.

Jacob and Kyle both attended Ysgol Gyfun Cwm Rhymni whilst Ewan Challenger went to Lewis School in Pengam. All three played Rugby League for their schools in Champion Schools as well as Aber Valley Wolves.

Five more of the north-based players from the side were already on the books of Super League clubs. They are twins Harvey and Keenan McDaid of St Peter and Paul Catholic School, Halton Farnworth Hornets and St Helens, Billy Glover of Wade Deacon High School, Halton Farnworth Hornets and Widnes Vikings), whilst James Machin and Lewis Hall are both with Great Sankey High School, Crosfields ARLFC and Warrington Wolves.

Wales under 16 coach Jason Seddon said: “Having so many players in these set ups is a great statement from our point of view. We always knew we had the talent here, we just needed it to be recognised.

“Super League clubs focussing on talent in Wales has been a contentious issue in the past as we’ve had kids more than capable to be in Super League academies but have not been picked up. The exposure wasn’t there. Now it has been, especially following results in recent weeks, people have picked up on it.

“The lads will go up and train with their clubs on a regular basis, get more experience and get coaching with players of a good standard and will bring it back to their community clubs. Travel has been an issue in the past but now I hear that plans are in place for them to travel, train and adapt. I don’t see travel being an issue, they’re good enough and I think they’ll progress.

“When they get to the end of under 16, a decision will be made of whether to go into the 19s and then they could move to the north of England.”

Seddon says that the Wales set up are now planning for more players to hopefully be scouted by Super League clubs, with the successful Ysgol Gyfun Gymraeg Glantaf side, all of whom are currently aged 14, being high on the list.

“I know people thought we may not even be competitive this year but the standard we have I thought we’d do very well,” Seddon adds. “We’ve the Glantaf lads qualifying for the under 16 side for next year plus there are more on our radar from all around Wales, north and south. It’s only going to keep rolling and get bigger and better. We at Wales Rugby League have to not only keep this momentum going but make it grow so we can build successful sides right throughout the international set-up.”