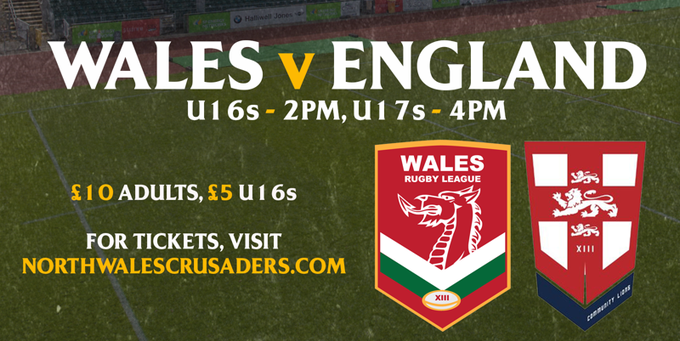 The match, which will celebrate 20 years of junior international rugby league in Wales, is the first of a double header which also sees the two sides meet at U17 level at 4pm.

CLICK HERE TO BUY TICKETS FOR THE DOUBLE HEADER

Jones has selected all of his players from the successful domestic junior competition in South Wales, where over a thousand juniors have been playing from aged 8 to 17 this summer.

He said: “Congratulations to all the players selected – selection was really tough with great competition for all places. Wales Rugby League are proud of our development pathway and this was evident in the standard of rugby league at the Junior Grand Finals last Sunday. We’ve named just 19 players as we’ve left room for some 16-year olds from the U17s squad who may play in this game.

“Although, due to Covid, it’s been a shortened programme, we are set up well to compete against England and now have a development squad of U15s who will be ready to step up into the international squad next year.

“So we are looking forward to seeing the players that missed out playing in the Origin series in September.

“A big thanks to everyone at Salford Red Devils, Coleg y Cymoedd, MOD St Athan and many other for all of their help in preparing for this match. This weekend, we are fortunate to have excellent staff available with Wayne Ponting, Richard Lewis, Louise Morgan and Stuart and Amanda Wilkinson helping to prep the squad.”

Cardiff Blue Dragons provide the most players (five) and history could be made if two of their players, Dafydd and Dylan Morgan are both selected, as they could be the first brothers of a different age to play in the same Wales age-grade side. Cynon Valley Cavaliers provide four players, whilst Bridgend Blue Bulls and Torfaen Tigers each provide three.

Aberavon Fighting Irish’s return to rugby league after 15 years could see their first international representative since 2006, which was when Aberavon’s Jason Keneally waltzed passed an Australian U18 backline, containing future test stars Israel Folau and Chris Lawrence, to score a try. They provide two players, whilst Aber Valley Wolves and Swansea Stallions chip in with one each.