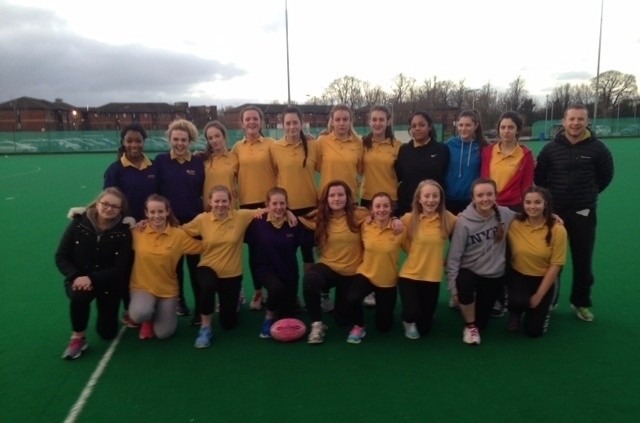 The game was played between girls in year 10 and 11 and it was another thriller of a game played under lights on the superb all-weather surface at Glyndwr University Sports Centre. Like the first girls’ fixture a few weeks ago, the game was played over four 20 minute quarters.

Both teams can be hugely proud of their efforts but it was St Joseph’s greater composure in the fourth quarter which saw them home, using their experience from their first game against Elfed High School to very good effect.

Darland played some very impressive Rugby League, putting together several super passing moves and the girls will be all the better for this first outing.

The first quarter started very evenly with both teams feeling their way into the game. However it was St Joseph who were first on the scoreboard as a loose Darland pass was expertly picked up by Amber Marvin was scooted 20 metres to the try line. Darland responded well but were held at bay by the well drilled St Joseph defence. No further score in the quarter saw St Joseph hold onto their 4–0 lead.

The second quarter was another very evenly contested period. Both teams had now fully settled into the game and there was a nice ebb and flow to the game but both defences were proving to be water tight despite several skilful passing moves testing defences to the full. At half time St Joseph still held their narrow 4–0 advantage.

Darland pressed hard in the third quarter and there were some uncharacteristic errors creeping into the St Joseph game and from a dropped pass, Darland’s Regan Brown collected the ball and raced away from the half way line to even the scores at 4-4 which is how it remained at the end of the third quarter.

St Joseph recovered their composure during the break and started the fourth quarter on fire. Two neat passes down the left hand side put Grace Amedor in just enough space to use some nifty footwork and speed away to the try line from fully 60 metres out. 8-4 to St Joseph.

Darland pressed for the score to even the game up again but a loose pass was pounced on by Amedor who again proved too quick for the Darland defence extending their lead to 12-4.

Grace Amedor completed her last quarter hat-trick with another jet heeled run to the try line to complete the scoring.

Community Rugby League Coach, Allen Jones said: “The sheer effort, enthusiasm, determination and guts shown by all the girls was a delight. Never for one second did the pace of the game relent and the catching skills on show were at times breathtaking. Darland’s Dummy Half, Vicky Tinniswood, had a top game and was a cool, calm customer in attack and got through a mountain of work in defence, when she took a well-earned rest in the fourth quarter the Darland attack did stutter a bit. Grace Amedor’s three tries were the big difference but Grace Roberts has a huge fourth quarter for St Joseph’s, showing great leadership qualities and driving the ball relentlessly forward for her team.

“All concerned can be very proud of the girl’s efforts and huge thanks are also due to the PE Staff at both schools for the time, effort and patience they have shown in coaching the teams to such a high standard in such a short space of time. Thanks also to the Sports Development Staff at Wrexham County Borough Council and to Glyndwr University Sports Centre for their ongoing support.”

Earlier on in the day Darland High School Year 9 Boys played a full 13-a-side contact game of Rugby League. Mr Lloyd’s PE Class took on Mr Hamm’s PE Class in titanic clash on the school rugby pitch and the game ended all square at 4-4. The highlight of this game was the ferocity of the tackling with neither team giving an inch of ground uncontested. Well done to all who contested this fixture and to the PE Department at Darland for producing such a fine game of schools Rugby League.