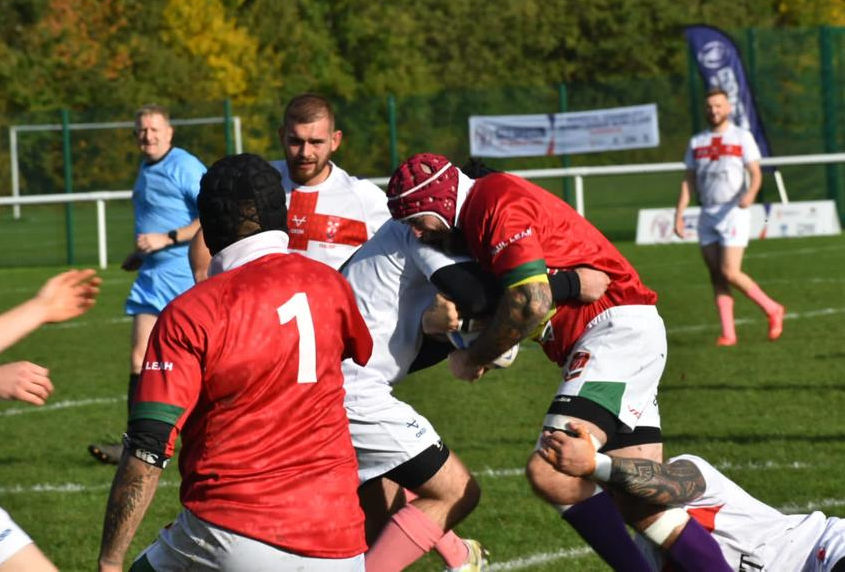 The Wales Physical Disability Rugby League side put in a brave and battling performance in their second game of their World Cup campaign, but eventually went down 32-6 to a powerful English team.

On a bright and sunny Tuesday in Warrington, the Welsh team managed by Craig Fisher and Neil Lynch knew they would be in for a tough challenge against the competition favourites led by their coach Shaun Briscoe.

The Welsh PDRL team made a promising start against a strong English that had heavily defeated Australia 58-6 last time out.

It was Wales captain Ben Lewis leading by example with some fine tackles, but when Wales picked up a couple of early injuries, it was England that struck first with an outstanding clean-break solo try from Adam Fleming, which went unconverted.

Wales were clearly stung by the early home score and fought back with a great try from Paul Jones which was well converted by Gareth Sullivan to give Wales a 6-4 lead.

Wales kept driving forward through Paul Jones and Dan Shaw, but after a fantastic end to end first period, England finished with two quick tries from Scott Gobin and Peter Clarke, the second converted by Darren Dean, to lead 14-6 at the break.

The second half saw an even opening 20 minutes play with the sides unable to get to the try line despite some fine breaks from both teams. Finally, as the Welsh tired, further scores came from England as a brilliant brace from Connor Lynes turned the match, running almost the length of the pitch on two occasions. Sam Zellar converted both and England were now 26-6 up. This changed the pattern of the game and in the last few minutes, the home team capitalised again to score through Scott Gobin after a fine Darren Dean break through the middle of the field. Dean converted again to complete proceedings.

Despite picking up early injuries, this was a brave and battling result for the Welsh PDRL team against a powerful England. The Welsh now move on to play Australia on Friday 28th October at 7pm, Victoria Park, Warrington knowing that if they win, they could have another crack against England in Sunday’s final.

New Zealand bounced back from their close defeat to Wales by beating Australia 34-26 in the day’s second game with Roko Nailolo scoring five tries for the Kiwis.