Wales Rugby League women’s head coach Craig Taylor has released a squad of 24 for their first ever international matches, when they face Great Britain Teachers and England Lions this autumn. 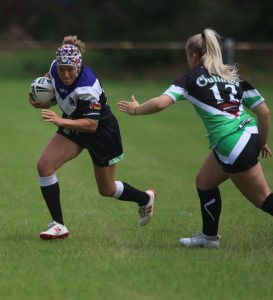 Rafiuke Taylor (pictured) could potentially become Wales’ first ever female dual code test international if she takes to the field against England Lions in Leigh on Saturday 16 November (kick-off 3pm).

That will be Wales’ first female capped game. Wales’ opening match against GB Teachers at The Gnoll in Neath on Saturday 26 October (kick-off 12.30pm) is a warm-up game and uncapped.

Rafiuke Taylor won five caps for Wales in rugby union between 2013 and 2014. The former Pontyclun Falcons and Sea View RU player is one of 14 Cardiff Blue Dragons RLFC players in the squad.

The Blue Dragons played two matches against Rhondda Outlaws this summer in Wales’ first ever open-age women’s matches. The Outlaws have nine players in Taylor’s squad, with the British Army’s Vicky Lea completing the 24.

He said: “It was a brilliant day. I was really impressed by the girls attitude, application and togetherness. They encouraged each other throughout a demanding day from first minute to the last.

“I’ve been involved with representative rugby for a number of years, and it was one of the best trial days I’ve ever experienced and if that day was anything to go by, then the future of women’s rugby league is bright in Wales.

“This first squad was very difficult to select. We had 52 players registered for the day which was an amazing response. We’ve deliberately not gone searching for heritage players in the Women’s Super League and Championships this time around. Their play-offs are just beginning this weekend and also we wanted to build from within.

“The ladies knew they’d been selected at the start of this week and I’ve already been in touch with them, sending homework, videos to watch and to give feedback. Everyone is so enthusiastic.

“There has been some great work from people like James Allen, Louise Morgan and Gareth Kear from Wales Rugby League to get this off the ground. I’d like to thank them, plus all of the players for their efforts so far. I’m sure they’ll put the red shirt on with pride for the first time later this month.”

Wales Rugby League board member Gareth Kear adds: “As an ex head coach of Wales rugby union women, I have been incredibly impressed by how quickly all the players have adapted to different physical and fitness challenges of Rugby League.

“Having watched all the matches we’ve played at club and Origin level so far, I know the players will all bring the high levels of skill and passion that being an international player requires, to the Wales side.”