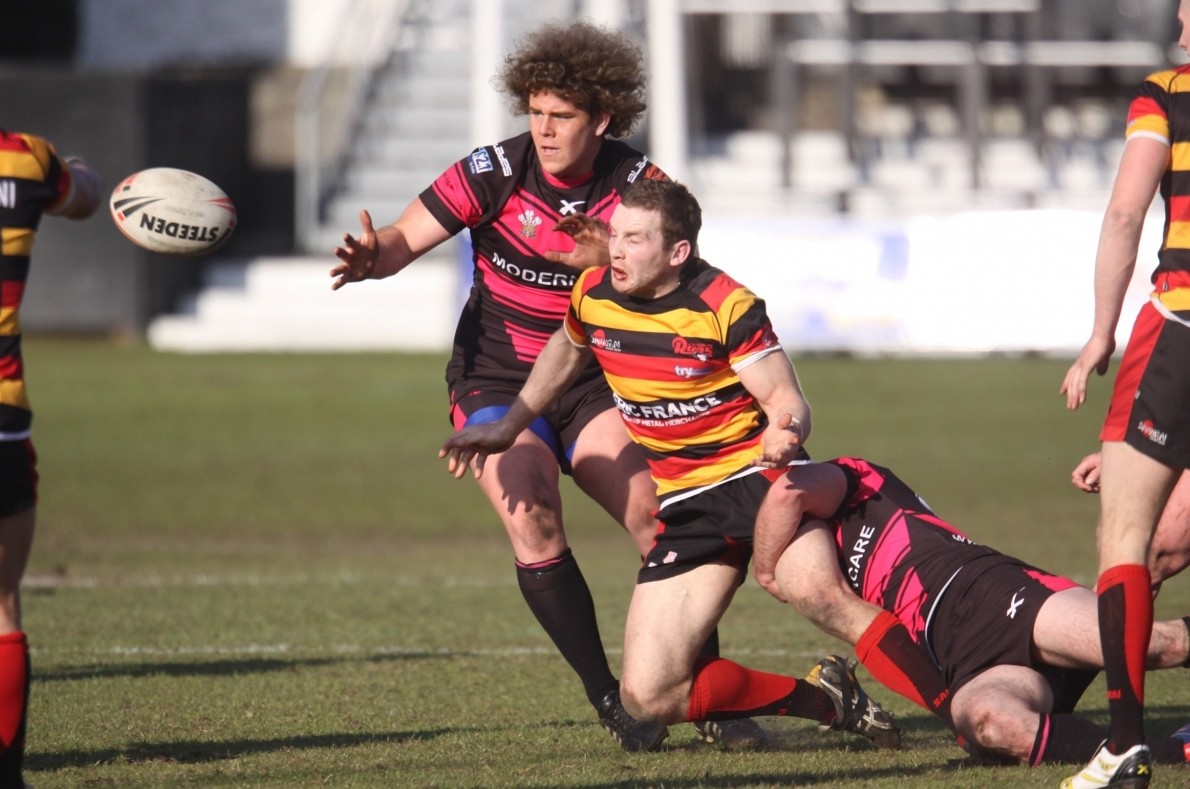 South Wales Scorpions were outclassed by a higher division team on Sunday when Championship side Dewsbury Rams knocked them out of the Carnegie Challenge Cup.

It wasn’t the best of starts for new Director of Rugby Mark Rowley who saw his side go down 62-6 to the far more experienced Yorkshire side.

Five Scorpions debutants, three of whom were playing their first ever professional Rugby League game, were given a tough introduction after the visitors went 32-0 up at half-time.

Dewsbury always looked in control and the Scorpions were no match for their size, strength and speed.

“We were shown how to play Rugby League by a top side who have played four or five games more than us. We were slow coming out of the traps and we weren’t clued up enough on the way the top divisions play. We were given a lesson.

“They had some really strong players and we struggled to cope with the physicality.”

It didn’t help that the Scorpions spilled the ball twice in the first two minutes, the first from kick-off, which gave Dewsbury an early advantage.

And it looked like the first try would come after just 50 seconds when Anthony England crossed under the sticks but the officials ruled it out for a forward pass.

But they made no mistake after regaining the ball from a scrum and Rob Spicer squeezed through a gap in the Scorpions defence. Dominic Brambini converted.

The second try came on seven minutes when James Craven set up Austin Buchanan on the wing who ran unchallenged to the line.

Eight minutes later it was 16-0 when England was set up by Jordan Tansey and Brambini goaled.

And Scorpions fans knew it was going to be a long afternoon when Elliot Cosgrove found it too easy to slip under the sticks for the fourth try with Brambini converting.

The half-time score was 0-32 after the Rams got their fifth two minutes before the interval and their sixth from kick-off. Johnny Horton stopped by Andrew Gay, Cosgrove was short and the ball was worked over to Buchanan who was again unmarked on the wing to score his second, then Horton worked his through on the overlap right on the hooter with Brambini converting.

Scorpions finally opened their account nine minutes into the second half when Andrew Gay followed up his own chip kick to score under the posts. Lewis Reece converted.

But the joy was short-lived. Christiaan Roets was sinbinned for a late tackle and the Rams took advantage, Scott Turner forcing his way over on the hour. Keegan Hirst followed him through from kick-off. Brambini kicked his fifth and sixth goals of the day before scoring a try of his own and converting that.

Dewsbury scored two further tries in the last five minutes for good measure. Luke Menzies scored under the sticks with Brambini easily converting before the kicker raced through for his second and converted again.

Rams coach Warren Jowitt was pleased at the win but wasn’t 100% happy with his side’s performance.

“It was a professional performance from us,” he said. “The first 20 minutes and the last quarter of the game were really good but the middle 40 weren’;t so good. We let Scorpions off the hook a lot with our own mistakes and own wrong-doing. We need to cut out the silly penalties and silly mistakes.

“We went away from our game-plan when they players decided to do what they wanted to do which is what let Scorpions back in. I made it clear that I wasn’t happy and I wanted them to put their foot on the gas again which they did do in the last quarter.

“We also benefited from a few decisions going our way when they shouldn’t have done.”