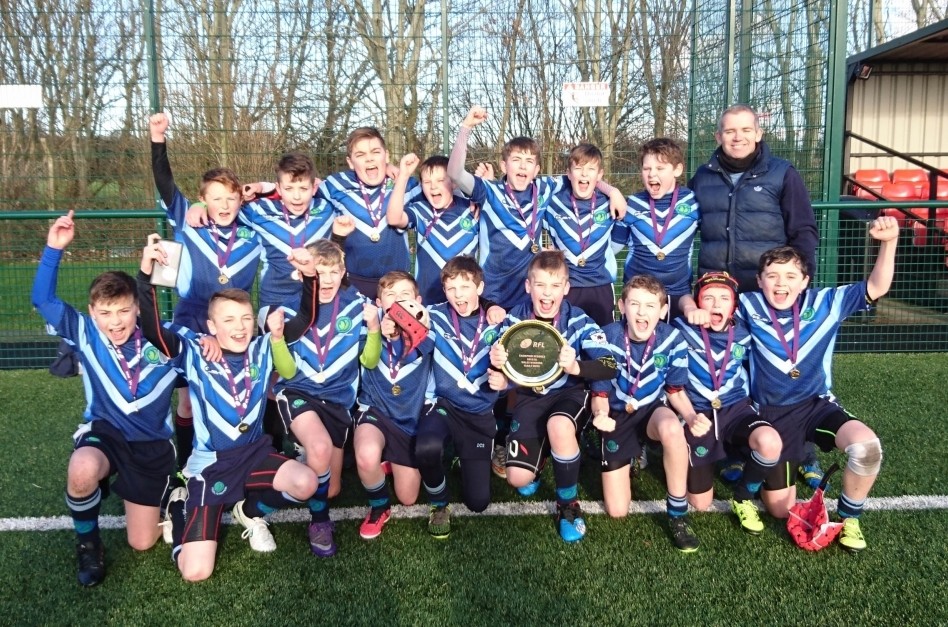 Ysgol Gyfun Ystalyfera will be Wales’ representatives on the road to Wembley this year after beating Ysgol Gyfun Gymraeg Glantaf 34-16 in the Wales Rugby League Year 7 Champion Schools Final on Friday afternoon.

The West Wales school were in control from the start and after winning an early penalty, Kian Abraham did well force his way over the line for the opening try. Man of the Match Llien Morgan converted.

Owain Hopkins followed that up immediately by running a try over in the corner to make it 10-0 to Ystalyfera.

Glantaf struck back through an excellent individual Louis Rochefort-Shugar try which Harri Metcalfe converted to bring the score back to 10-6, but Ystalyfera addressed the balance straight away after full-back Morgan ran home with an unconverted try.

A try in corner for Efan Hughes again closed the gap but again Ystalyfera extended their advantage after a Hopkins’ second try with Morgan converting to make it 20-10 at the break.

Morgan started the second half where he left off, running half the length of the field to place the ball under the sticks, converting himself to bring the score up to 26-10.

And it was game over when winger Rhys Brewer ran in a try to extend Ystalyfera’s lead to 30-10.

A strong run from Abraham, brushing off all-comers made the score 34-10 but Glantaf did force a consolation over through a Rhydian Williams try that was well converted from the touchline by Metcalfe.

Ystalyfera now go on to meet RGS High Wycombe in Maidenhead in the first round of the national competition on January 28th, which ends at Wembley Stadium, and their coach Ioan Bebb is looking forward to it.

“We took them on at year 8 level a couple of years ago in the year after they won at Wembley and we won on that occasion,” Bebb said. “We know that they’ll know their Rugby League and be organised but we’ve a decent side down here and some good rugby players. The big challenge for us is to mould them into a Rugby League side that can win in a couple of weeks’ time. Glantaf showed last year that it’s not only possible to get to Wembley but to claim the crown. We want to emulate them this year and further the cause for Wales Rugby League.” 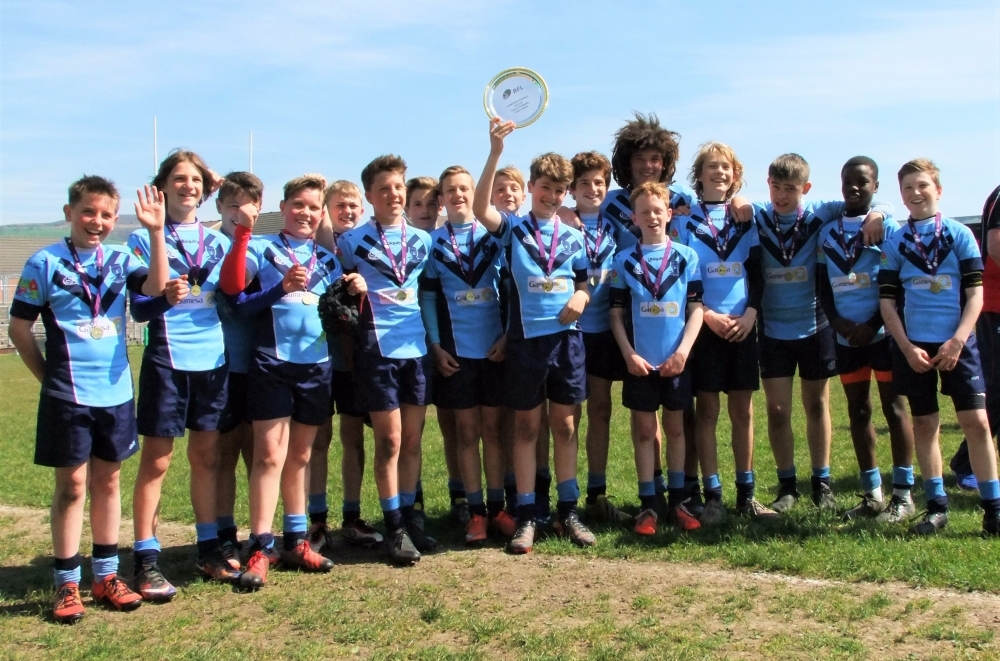 This set of Ysgol Gyfun Gymraeg Glantaf players have still never lost a game of Rugby League in their lives after beating Strade 46-12 in the Welsh Year 8 Champion Schools Final.

With a national semi-final against Saddleworth on the horizon in two weeks’ time, the Cardiff-based school were always in control of this match against their rivals from Llanelli, who they beat on the road to their Wembley victory last year when they were Year 7 pupils.

An early penalty put the champions on the attack and after repeat sets, Gwylim Evans scored in the corner.

Glantaf kept attacking and further tries from Cai Marcus and Harri Griffiths put them into a 12-0 lead.

Strade struck back as Luke Jones made a clean break and ran 50 metres to the line. Ellis Dickerson converted to bring the score back to 12-6.

But Glantaf soon addressed the balance as Rhodri Thomas scored in the corner and Gethin Marshall followed him over with Jac Lloyd converting for the first time to make the half-time score 22-6.

Cai Marcus darted over for the first Glantaf try of the second half which Lloyd converted to increase the lead further before Fin Lovett scored in the corner.

But the try of the match came from Strade’s Luke Jones who beat all-comers from the half way line to run in under the sticks. Dickerson converted to bring it back to 32-12.

Glantaf again showed their dominance and a try from Ewan Skuse converted by Lloyd made it 38-12. Marcus added Glantaf’s ninth score with Lloyd’s conversion hitting the post.

Iwan Pierce Jones, son of actor John who was in the crowd, got the tenth and final score. 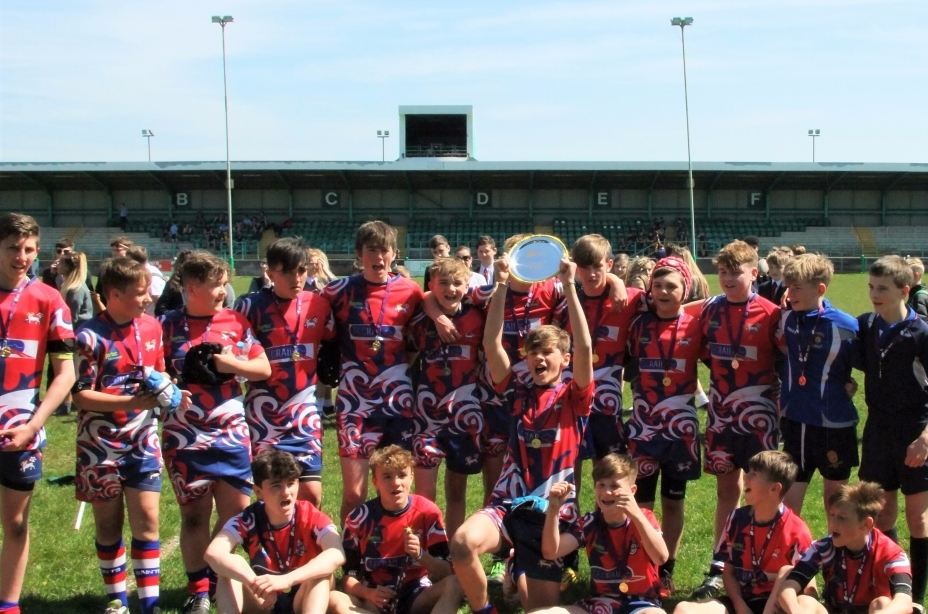 had the game won before half-time, and took an early lead when Morgan Biggins ran through and Cameron Samuel converted.

Alex Mann soon followed him over with Samuel’s second kick making the score 12-0.

The third try came soon after as Callum Earland sprinted over with Samuel’s kick just wide, Lewis Gough got the fourth and fifth, both in the corner, both unconverted to make the score 24-0.

Isaak Davies sprinted half the length of the field for the sixth that Samuel improved and the score went up to 30-0. Earland also ran nearly 50 metres for their seventh try of the half with Samuel’s conversion made the score an unreachable 36-0 at half-time.

However Strade were going to give it a go. A dropped ball let them in for their first try, just after the interval, Bradley Crossman the quick thinker.

But St John’s scored as soon as they regained the ball, Gough running in for his hat-trick with Samuel converting. 42-4.

Morgan Jones went in under the sticks for Strade’s second, converted by Osian Thomas, but St Johns scored straight away again, Gough in the corner with his fourth try after good work from Samuel, who added the extras.

Another strong run from Izaak Davies brought up the 50 with Samuel’s kick bringing the score up to 54-10.

However Strade weren’t lying down and they fought for a third try as Crossman again showed guts to break through. 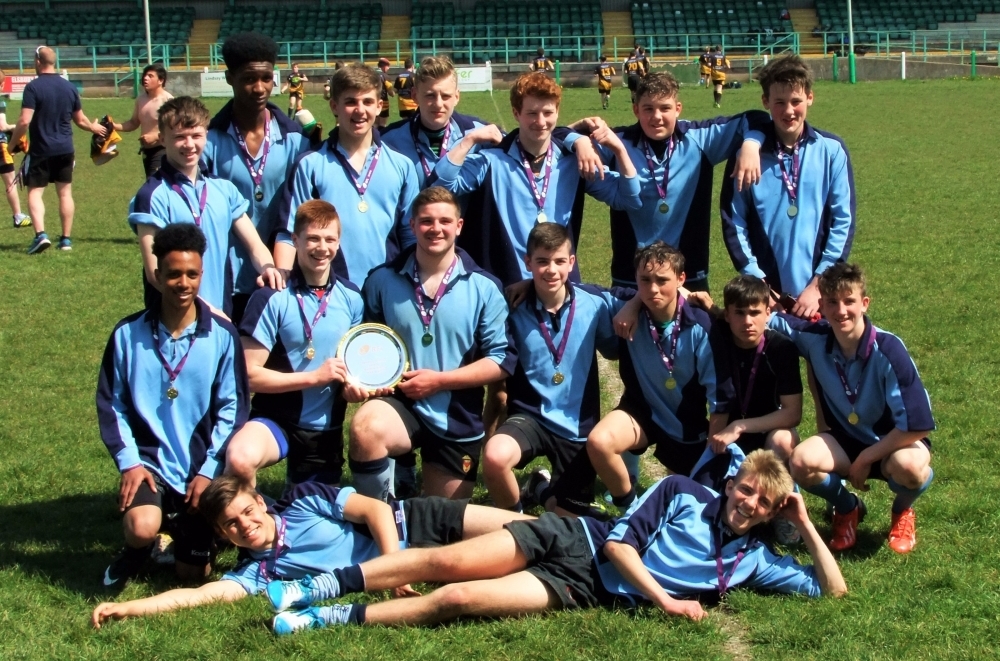 In a match that was closer than the scoreline makes out, St Joseph’s were made to fight hard to win the Year 10 Final against Aberdare Comprehensive.

Aberdare took the lead with a Morgan Lloyd try under the sticks that Keian Richards converted, but St Joseph’s soon hit back with an unconverted try from Ben Torjesen.

Straight away Aberdare increased their lead as two bursts of speed gave them an 18-4 advantage as Corey Matthews and Ben Wills claimed tries, both of which were converted by Richards.

But the Newport school went into the break with a 28-18 half-time lead.

They broke through from a scrum and Thomas Fouweather scored under the sticks with Ieuan Smith converting.

Rhys Cook scored in the corner and Smith converted, before regaining the lead through a Smith try and extending it with Torjesen’s second. Smith’s boot improved them all.

Aberdare were first on the board in the second half as Richards’ try and goal brought the score back to 28-24 but St Joseph’s scored again straight away – an unconverted effort from Smith.

Aberdare were again quick off the blocks. Ellis Roberts with the try and Richards converting to make it 32-30.

St Joseph’s regained their eight point advantage when Smith went over for his hat-trick before leaping onto a grubber kick for his fourth.

Torjesen then forced his way over for his hat-trick to bring the score up to 44-30 but Aberdare weren’t finished yet with Ben Wills’ unconverted try bringing the gap back to 10 points.

But St Joseph’s wrapped the game up through a Dan Tilley try and Smith improved to bring up the 50. Kieran Chindoo-Roy’s late try put the icing on the cake. 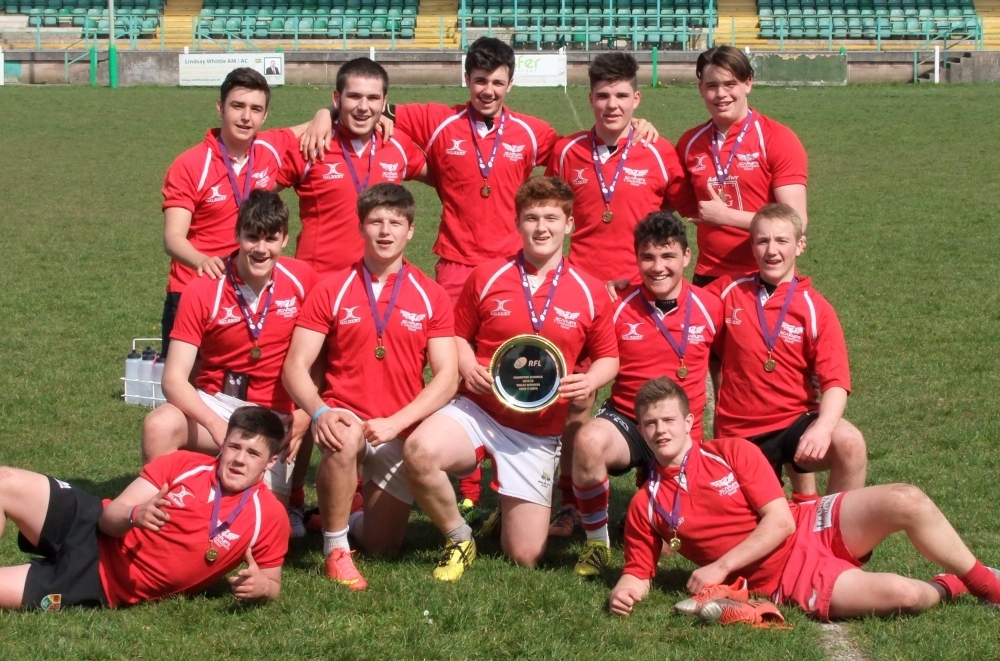 After suffering disappointment earlier in the day at Year 8 and 9 levels, Ysgol Y Strade’s Year 11 side put in a strong second half performance after what was even encounter against Monmouth Comprehensive before the break.

Two tries in the corner from Jacob Williams gave Strade an early 8-0 first half lead.

Monmouth struck back through an Ellis Brown try that Bret Thomas converted before taking the lead after a breakaway try from Lewis Davies. Again converted to make the score 12-8.

However Strade went into half time with a slender 14-12 lead after Williams ran in his and his side’s third which was converted by David Jones.

That try inspired the Llanelli school as, despite travelling without subs, they dominated the second half.

Jordan Ball scored in the corner early on to increase the lead to 18-12 before a breakaway try from Jacob Williams improved by Jones gave Strade a two-try cushion.

Stefan Williams’ burst of speed increased Strade’s lead further, Jay Gallagher converting, then two tries, both from kick-off, made it 40-12. Steffan Collins and Tyler Pugsley the scorers, Gallagher slotting over the first of the conversions.

Monmouth struck back with two tries of their own, both from Ieaun Evans with Thomas converting the second.

It was however too big a lead for Monmouth to crawl back and Strade cemented their win with a Rhys Ratner try in the corner.