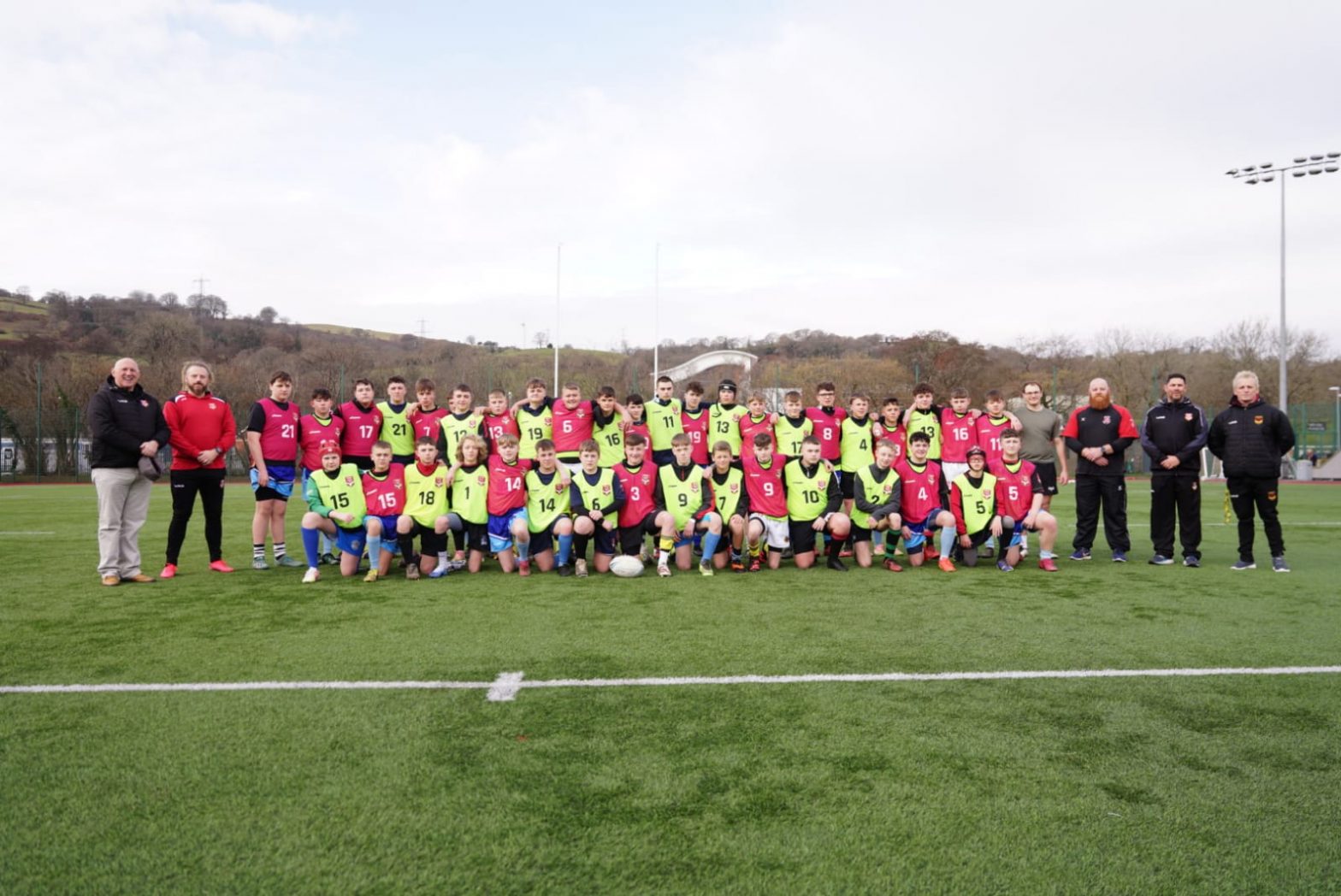 Over 800 people came through the gates to witness 27 tries in two games in a very successful Junior Origin Day in Ystrad Mynach on Saturday.

East Wales took on West Wales at U14 and U16 level, which was a culmination of three months’ worth of hard work in two different camps, run by Wales Rugby League in association with Coleg y Cymoedd and Salford Red Devils.

The U14s were up first with East Wales running out 30-26 winners in a match that was halted five minutes’ early due to a head injury to East’s Finlay Walker. The half-back, who kicked three conversions, was taken to hospital, and all is well.

Easts dominated the early part of the game with Jake Harries scoring out wide after nine minutes and Charlie Bennett following him over in similar fashion after 18.

Walker couldn’t land those two kicks but didn’t waste the easier opportunity after Paddy Bateman ran through from kick-off.

That made it 14-0 and it was soon 18, when Thomas Howe added a fourth try, which went unconverted.

West’s comeback started five minutes before the break with a Leo Bonham try to put the score at 18-4, but within five minutes, they’d pulled it back to 18-14.

Hudson Nevin was first over, jinking through from dummy half, before a 60 metre run from kick-off by Ben Coomer put the score onto 18-12 with Juris Kesans converting for the first time.

Kaven Phillips extended East’s lead two minutes after that, with Walker adding the goal, before Kesans scored the first of his brace of tries.

A Bailey Cutts try in the corner pulled the score back to 24-22 with Kesans unable to level the scores, but after West were penalised from kick-off, Tobie Cribb scored what ended up to be the winning try, with Walker converting.

Kesans had the last say with a try that he couldn’t improve, before Walker’s injury put an slightly premature end to an exciting game. Click here for teams and score times.

The U16 sides played a full 80 minutes, albeit split into quarters, with West’s Troy Shearan landing the winning try and conversion with just three minutes remaining for a 36-34 victory.

Ethan Stebbings struck first for East Wales after just two minutes, scoring in the corner but Shearan slid in for the first of his four tries a few minutes later to level things.

Jake Nottingham then broke away, after a fabulous passing move, to give Wests the lead after nine minutes. Again the kick was missed and West were 8-4 up.

East regained possession from kick-off, resulting in a well worked set and Dan Bartlett scored under the sticks. Mason Apsee converted, then Oliver Ford extended the lead in the next set. East were 14-8 up on 17 minutes in a game that was already turning into a thriller.

But, from the next set, Nottingham took advantage of a loose ball and ran over 50 metres for his second try of the game.

West took advantage and scored again on the next set, this one by Charlie Stoddart, who couldn’t land the extras but his side were back in the lead.

However East soon regained the lead with Dan Bartlett and Daf Morgan each scoring out wide to put the score onto 22-16.

But the score was brought back to 22-20 on the dot of half-time thanks to an unconverted Tom West effort.

Like in the 14s game, West scored quickly after the break, with Shearan going over and Leon Caviel converting. Shearan clinched his hat-trick ten minutes later to give his side an eight-point lead.

East weren’t finished yet. Bartlett forced his way under the sticks with Henry Parker converting to bring the score back to 30-28 to West on 57 minutes.

The hosts looked like they had it won when Carter Pritchard, grandson of former Wales international Gordon, scored on 71 minutes and Apsee converted, but they didn’t count on the heroics of player of the match Shearan.

The second row forward scored out in the corner with four minutes remaining, then calmly landed a touchline conversion to give his side a dramatic 36-34 victory. Click here for teams and score times.

Wales Rugby League’s development manager, Mark Jones said: “Today’s successful event highlights the huge interest currently in rugby league at the moment in Wales. The regional programme is about developing players and them pushing on through the WRL pathways, I am hoping many of these players now go on to represent Wales and sign for the Academy based in Coleg y Cymoedd.”

The Origin 16s programme is a transition for the WRL National Development Academy based at Coleg Y Cymoedd. If you are interested in applying for the full-time course for 2022-23, please go to https://www.cymoedd.ac.uk/course-detail/level-3-sport-rugby-league/?course_id=08F302YB