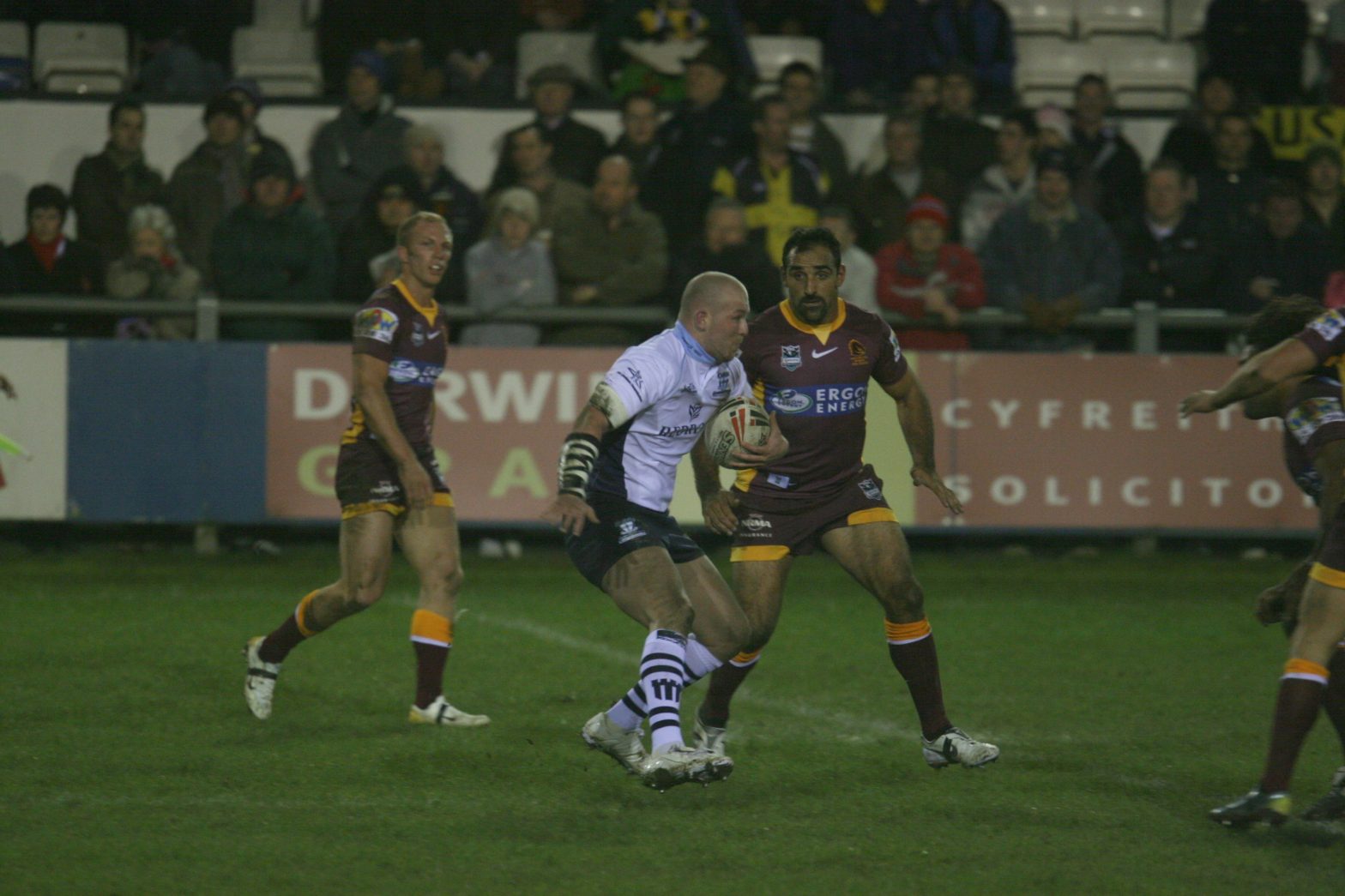 What a night at the Brewery Field in Bridgend. It didn’t matter that the Broncos won the game – the real winners were Celtic Crusaders and Welsh Rugby League as a whole with the publicity that it generated over the week preceding the big game, a record Crusaders crowd of 2,041 and a plucky performance from the home side.

The match, known as the Bulmers Original Cider Challenge, after their lucrative sponsorship deal, gave Celtic Crusaders column inches in the local press that had previously been unheard of. Leading the way were the South Wales Echo with almost a page a day dedicated to the match for the three days leading up to the game with a different picture of Darren Lockyer on each occasion.

Yes, the media and general public as a whole now know that the Celtic Crusaders are here. All local television stations gave live feeds from the ground before the game, broadcast pre-match items the days before and are due to show highlights on their Friday night shows. Real Radio had an hour long Celtic Crusaders special on the evening before the game while Bridgend’s local radio station, Bridge FM, ran a competition just three hours before kick-off for two tickets to the match and they report that it generated the most number of callers ever for a competition on their station and the telephone staff just couldn’t handle the amount of calls received.

“It’s been the biggest night of Welsh Rugby League since the days of Jonathan Davies,” said Crusaders’ Operations Manager Gerald McCarthy. “It’s been really hard work but it was well worth it – the visit of the Broncos has helped get the Crusaders on the map. And what a fantastic effort from our lads, we’re all really proud of them.”

To say that the Crusaders performed a lot better than they did against Widnes Vikings last week is an understatement. The Broncos, with nine Australian internationals in the side, struggled for the first quarter of the game, looking a little jet-lagged after their long trip as the Crusaders initially looked the better side. Darius Boyd was put under pressure in his own goal area and was forced to place the ball down to prevent being tackled by Tony Duggan. Brad Thorn very nearly knocked on by his own 30 metre line while Corey Parker was penalised for just that when he was close to scoring.

It took 20 minutes for the NRL champions to break the duck, and it all stemmed from a Darren Mapp knock-on when he was close to the line. From the scrum, Shane Perry broke through and slipped the ball to Darren Lockyer who ran the ball under the sticks. Parker converted.

The Crusaders were playing out of their skins in both attack and defence. Lockyer could have scored a second try was it not for a joint tackle from Van Dijk and Phil Cushion that forced him to drop the ball. The Crusaders’ determination was rewarded on 31 minutes as they levelled the scores. Mark Dalle Cort laid the ball off to Welsh international Grant Epton who weaved his way through the Broncos defence to score. Luke Young kicked the conversion.

Justin Hodges’ pass that was intended for Darius Boyd instead found touch. But Hodges made up for that a few minutes later when he successfully intercepted a pass and easily ran the ball under the sticks. Michael Ennis converted to give the Broncos a slender half-time lead.

However the Australians took just 80 seconds to register their first score of the second half. San Thaiday made the metres down the centre of the park, culminating in Steve Michaels finishing off a fine passing move in the corner. Karmichael Hunt finished off a similar move seven minutes later and Parker converted to give the visitors a 16 point lead.

The Broncos had started to entertain. Darius Boyd impressed the crowd with a darting run but Brent Tate was tackled following an offload. Sam Thaiday also made a fine run but Ben Hannant dropped the pass. Crusaders weren’t without their chances. Damien Quinn made a powerful break but Darren Mapp failed to capitalise on his good work.

But Broncos extended their lead on 62 minutes when Steve Michaels scored his second of the evening. Tate added another on 69 minutes to make the final score 32-6 to the visitors.

Crusaders coach John Dixon was very pleased at the effort that his new-look side put into the game. Dixon said: “It was a very commendable performance from the boys. There were some really positive signs from our footy team today. I thought our forwards played really well against a set of backs that have some real size and power. We took some pride in defending our line – it was a very creditable performance from us.”

Referee: Richard Silverwood (Wakefield) Men of the Match: Crusaders – Young, Broncos – Civoniceva Gamebreaker: Karmichael Hunt’s 48th minute try gave the gallant Crusaders too big a gap to close. Gamestar: Petero Civoniceva who had a hand in many of the fine Broncos moves.