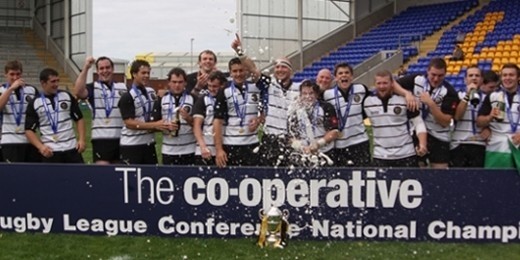 The Welsh youngsters, who will be competing in Super League reserves next year, dominated from almost start to finish, beating the Yorkshire side for the first time in four attempts this season as Bramley suffered their third Grand Final loss in four years.

Crusaders Colts coach Dan Clements, who picked up the league’s “Coach of the Year” award earlier this week, was ecstatic.

“At the start of the season, John Dixon said to me that he didn’t mind if we lost every game as long as we had a team out,” he said. “The whole aim of this team was give young Welshmen a chance to play rugby league on a consistent basis. It started off quite well and we surprised a few people including ourselves, and we’ve gone from strength to strength all year.”

“It was a really good game. We’ve worked on things a lot over the last couple of weeks and we all of it came off today. It was a fantastic all round team effort. Lee Williams was obviously man of the match today, Lloyd White had a good game and the forwards really stood out – Geraint Davies, Gil Dudson and Mark Wool especially did really well.”

Both sides started well as the sides entertained both sets of fans with end to end action. However neither side were able to cross the line in the first 25 minutes thanks in the main to solid defending from two determined outfits.

Colts were denied an opening try in the tenth minute.

Jamie I’Anson and Lloyd White had a hand in the set-up, I’Anson with a storming run down the centre of the park. Aled James set up Gary Williams in the corner but he was short of the line. And from the next tackle, James kicked, Chris Vitalini outjumped John Richardson to roll over ground but the referee controversially claimed that Vitalini was held-up.

But the Welshmen took the lead on 16 minutes after Lloyd White kicked a penalty when Bramley were penalised for holding down in the tackle.

Bramley were denied a try back again thanks to the solid Welsh defence. Matt Mullholland laid the ball off to John Richardson who dived over in the corner but Greg Callow and Lloyd White were on him in a flash and he was pushed into touch.

Colts turned attack into defence and were rewarded with their first try. Following a fine passing move, Lloyd White beat his markers to dive over. His kick was just centimetres from going over the crossbar, it actually went over the right hand post, so the score remained at 6-0.

Bramley finally crossed the line on the half hour when the Mullholland – Richardson combination finally worked with Richardson running through the gap his centre created. Paul Drake failed to convert.

Crusaders Colts struck back again just before the interval. Ashley Griffiths was stopped short of the line but from the next play, Gary Williams scored after excellent play from Phil Cushion and Chris Vitalini. White sliced his conversion wide so Crusaders went into the dressing rooms with just a one-try lead.

They extended their lead six minutes into the second half. Aled James’ kick confused the Bramley defence and White was happy to capitalise, diving on the loose ball to score, converting his own try.

After forcing Bramley to drop out from under the sticks, the Welsh lengthened their lead again but from a penalty. White kicking successfully following an infringement in the tackle.

Bramley attempted to strike back but once again the solid Welsh defence kept them out. Geraint Davies and Greg Callow especially doing well to prevent Bramley winger Dan Castow from scoring in the corner.

Both sides were reduced to 12 men for the final few minutes after Crusaders’ Phil Cushion and Bramley’s Graham Harrison were sinbinned for fighting. Crusaders were awarded a penalty due to the fight, that was started by Harrison, which White duly kicked from long range.

And man of the match Lee Williams wrapped up excellent Welsh performance with a superb individual try in the final minute to rub salt into the poor Buffalo wounds. White converted as the hooter sounded.

Williams, formerly with Valley Cougars, was top try scorer for the Crusaders Colts in 2008. He said: “In the first three games against Bramley we didn’t do the basics well. It was different today. This is going to be massive, we’re all home-based players and there’s a lot of young Welsh players coming through. To win the competition in only our first season is tremendous and, although it’s not about individual records, the try topped off a great season for me. However it’s a team effort and I couldn’t be top scorer without the other boys passing to me. It’s been a fantastic year.”