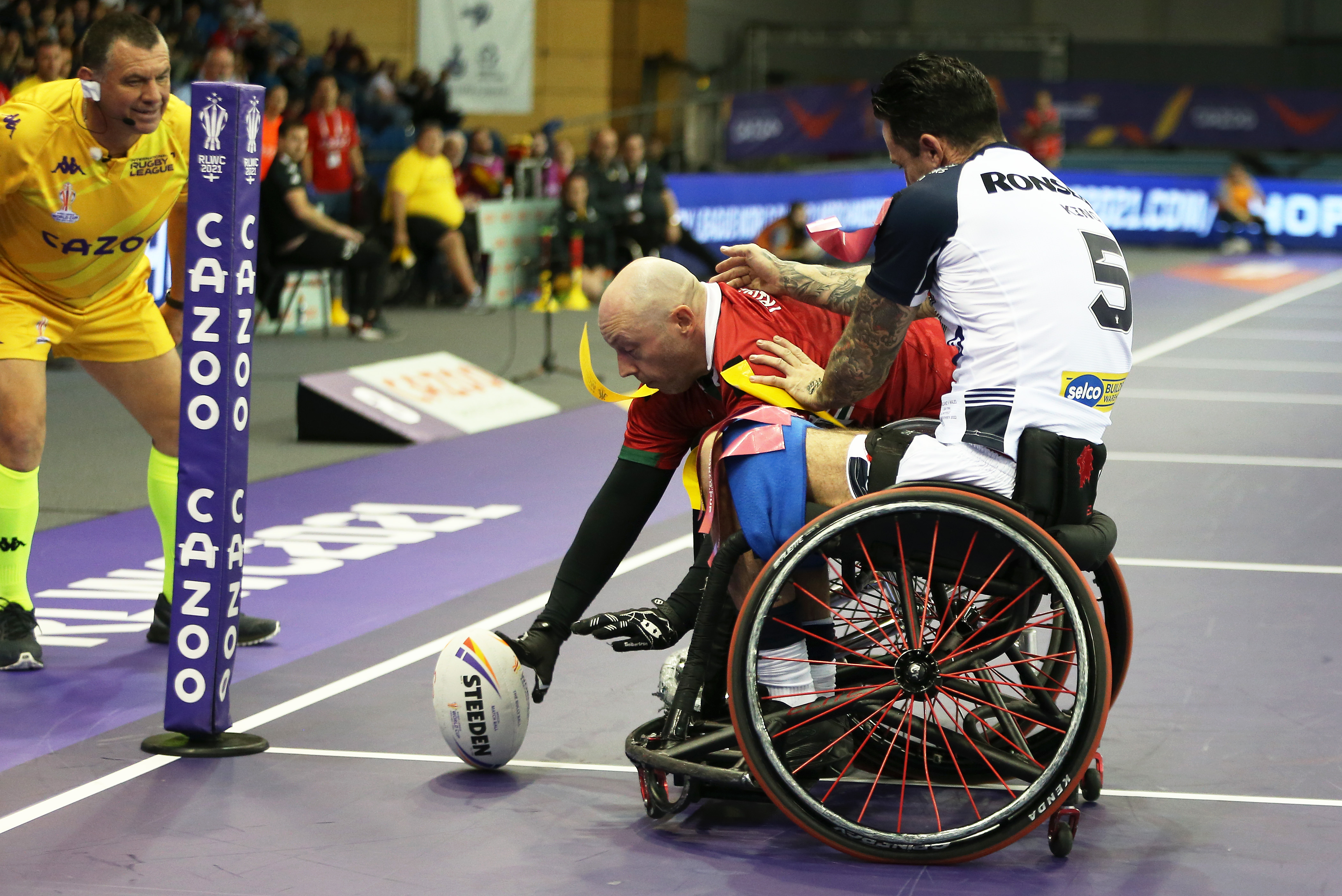 England dominated most of the World Cup semi-final against Wales, winning 125-22 to set up a clash with World Champions France in Friday’s final.

One of England’s star players, the French-based Sebastien Bechara, ran things in the early stages, scoring a very fast hat-trick of tries when he grounded on three, five and seven minutes. All three were converted by Rob Hawkins and England were 18-0 up in under nine minutes. Joe Coyd went over for an unconverted try on 13 minutes to put the score onto 22-0.

Wales looked for an opening. After winning a goal-line drop-out, Stuart Williams attempted to create a try, but his grubber was too long for anyone to jump onto.

They kept pressing and eventually Scott Trigg-Turner was the first over, scoring in the corner. Andrew Higgins converted.

England struck back straight away after taking advantage of a lucky bounce. Coyd scored in the corner and Hawkins converted.

Excellent defence form Wales stopped another England try. Trigg-Turner raced to tag Lewis King as he was speeding to the corner, bringing back memories of current Wales men’s captain Elliot Kear’s tackle on Leeds’ Scott Donald on his professional debut in 2009.

However Coyd did go over from their next set for his hat-trick which Hawkins improved. England continued their onslaught with Jack Brown crossing four times, Hawkins once and Bechara with his fourth of the game.

Four goals from Collins and two from Hawkins gave England an unsaleable 70-6 lead at the break.

The home side came out quickly in the second half and tries from Brown, Coyd and King, with two goals from Collins gave them an 86-6 lead.

Then Wales struck again as Gary Preece scored under the sticks, converting his own try.

However the was just respite. Brown scored his sixth of the game and his 50th World Cup try in total, with Collins converting to put the score onto 92-12.

A Collins try and goal followed, but Wales were in next. Stuart Williams, captaining Wales Wheelchair for a record 16th time and winning his 30th cap, scored in the corner. Preece couldn’t convert.

But from kick-off, England got over the century mark as Brown caught the kick-off to go over in the corner and Collins converted.

Now on fire, Brown scored again, before being replaced, and Collins converted.

His replacement Wayne Boardman, a lot slower that Brown, couldn’t add to the lead as he was tackled well by Harry Jones to prevent a try. He was the only England player not to score in this game.

Wales then got another try back as record cap holder Alan Caron easily slipped Boardman past for his side’s fourth try. Higgins converted.

England were back on the board with 10 minutes to go as Declan Roberts did well to out pace the Welsh to score his first try of the day. He was unable to convert his own try but did land a drop-goal two minutes later.

After a Harry Jones tackle prevented another England try, but Wales were down to four players for the last five minutes after Preece was sinbinned for an illegal tackle.

England made use of the gaps in the final stages. James Simpson scored and Declan Roberts converted before Hawkins went over for an unconverted effort, their 22nd try of the deal, to cement the win.

France still remain as the only nation to have ever beaten England in Wheelchair Rugby League. Will that happen again in Friday’s final?