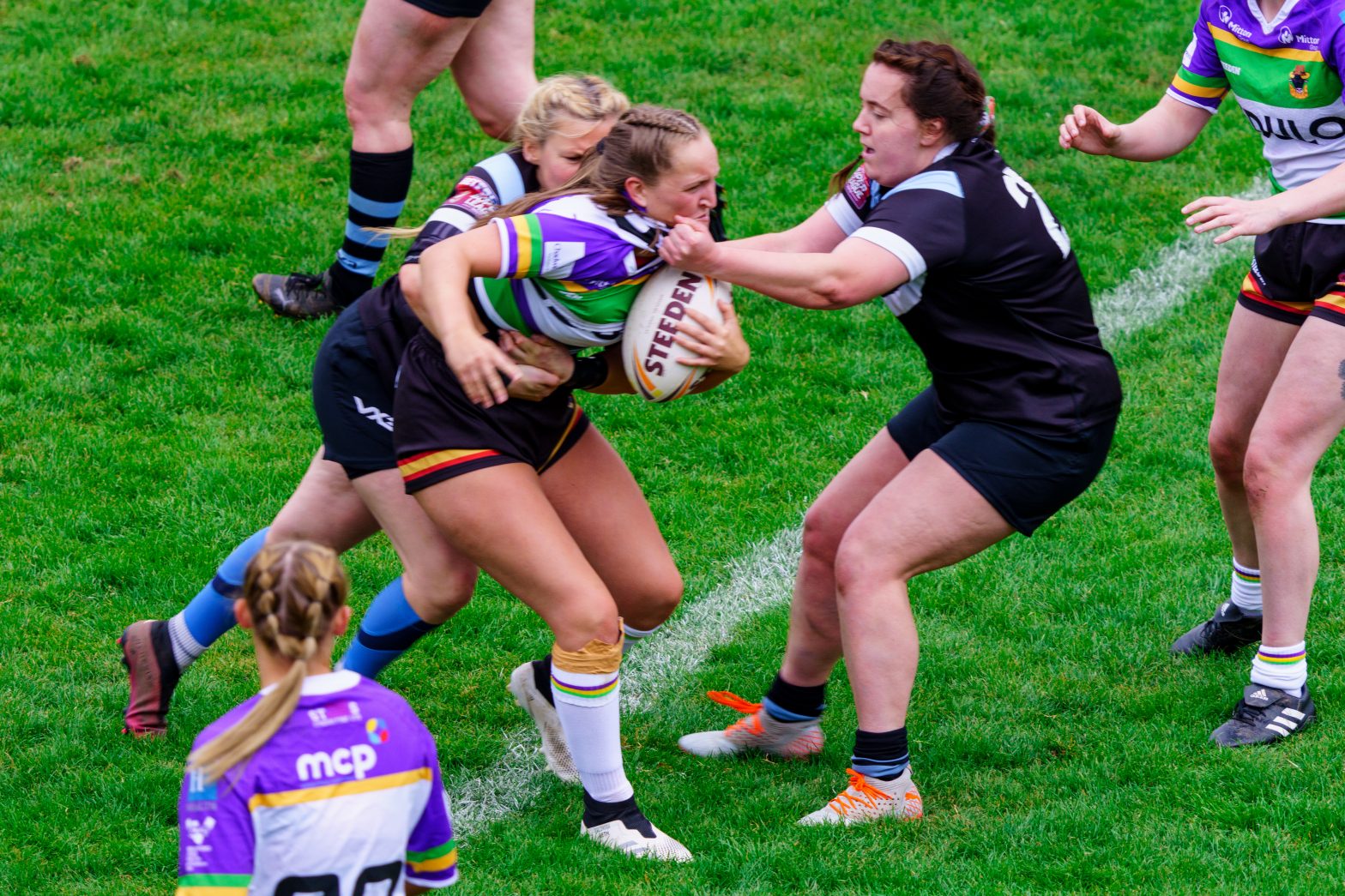 The story of the weekend came from the RFL Women’s Nines where 21 Welsh players, including 14 who are already capped, played for six different sides in the 20-team tournament that acted as qualifiers for a finals day set for Salford in July. Cardiff Demons had a 100 percent Welsh squad, and they caused a stir by beating established Super League sides Leigh Miners 19-4 and Bradford Bulls 29-4 before losing out to York City Knights, a side who are established as a top four club in the women’s game. Cardiff’s side contained internationals Lowri Norkett, Joeann McGuire, Eleri Michael, Rafiuke Taylor, Lauren Aitken, Stacey Wright, Bryonie King, Charlie Mundy, Leanne Burnell and Seren Gough-Walters, as well as yet-uncapped Rosie Carr, Katie Carr, Ffion Jenkins, Sophie Solari and Heather Rees – the latter two making their rugby league debuts. Burnell, King, Norkett, Katie Carr, Rees, Michael and McGuire were all try scorers with Mundy kicking the goals. Wales squad member Anne-Marie Sayle was in action for Bradford. They finished third in the group after their final game win, 12-8 over Leigh.

In addition, Carys Marsh played for Wigan who narrowly finished second to Catalans in their group after beating Wakefield 33-0 and Hull 30-0. Emily Hughes started for London Broncos as they beat Warrington Lunas 27-4 and Featherstone Rovers 15-8. Rebecca Davies was in the Lunas’ side. Finally, Keira McCosh and Fern Davies played for unbeaten Warrington Wolves. However, their side finished second in their group on points difference after their opening 17-all draw with St Helens. Warrington did beat Bristol Golden Ferns 29-0 and Barrow Raiders 14-4 but Saints outscored them with higher wins over those two sides.

In the men’s game, Welsh international winger Rob Massam gave the performance of the week when he scored four of North Wales Crusaders’ 16 tries against an understrength West Wales Raiders as they cruised to a club-record 84-6 win to remain top of League 1. The third of those tries was his 150th for the club. Sadly, all of Raiders’ registered full Wales internationals were injured, but they did field nine Welsh qualified players in Ben Jones, Sam Pridgeon, Shane Lee, Craig Lewis, Lloyd Allen, Ben Jackson, Dafydd Phillips, Harry Boots and Alan Pope – all bar Allen and Jackson being former junior, student or community internationals. Also in League 1, Gavin Bennion’s Rochdale Hornets were 50-0 winners away at Jake Lloyd’s Cornwall.

In the men’s Super League, Wigan’s Harry Smith kicked seven goals in their 40-22 win over Warrington Wolves, Lloyd White was in the Toulouse Olympique side as they lost 48-12 at Hull FC, whilst Morgan Knowles’ St Helens edged out Rhys Williams’ Salford Red Devils 14-10. For the Salford reserves side, Jacob Lee and Rhys Davies scored tries in their 34-all draw at home to Castleford Tigers. Cobi Green was also in the Red Devils’ side. Kyle Huish was in action for Wigan’s reserves as they won 32-10 at Huddersfield Giants.

In the RFL Championship, Wales men’s captain Elliot Kear was on the scoresheet as Bradford Bulls won 34-22 at Whitehaven. Ben Evans and Anthony Walker came off the bench in the Bulls’ victory. Also in Cumbria, Connor and Curtis Davies made a welcome return to the Championship as they featured for Workington Town in their 16-10 loss at home to Batley Bulldogs. Caleb Aekins and Luis Roberts starred for Leigh Centurions as they beat Sheffield Eagles 34-6. Jude Ferreira helped London Broncos to their first win over the season, and their first-ever at Plough Lane as they beat Dewsbury Rams 36-12. Finally, Matty Fozard scored a try for Widnes Vikings but it was poor consolation for he and Lewis Hulmes as they went down 74-6 at Featherstone Rovers.

In Australia, it was a tough day for Bradman Best and Tyson Frizell as their Newcastle Knights side were walloped 50-2 at home to the in-form Melbourne Storm. In the NSW Cup, Bailey Antrobus scored a try for St George Illawarra Dragons Reserves as they beat Western Suburbs Magpies 46-16. Lachlan Hughes was in action for Canterbury Bankstown Bulldogs Reserves but they lost out 18-12 at home to North Sydney Bears. Sam Hughes, Lachlan’s younger brother, played for the Bulldogs’ U21 side but also couldn’t help them to victory as they lost 36-4 to Sydney Roosters. Finally, Daniel Brown helped St Mary’s to a 54-10 win over Wentworthville United in the Sydney Shield.