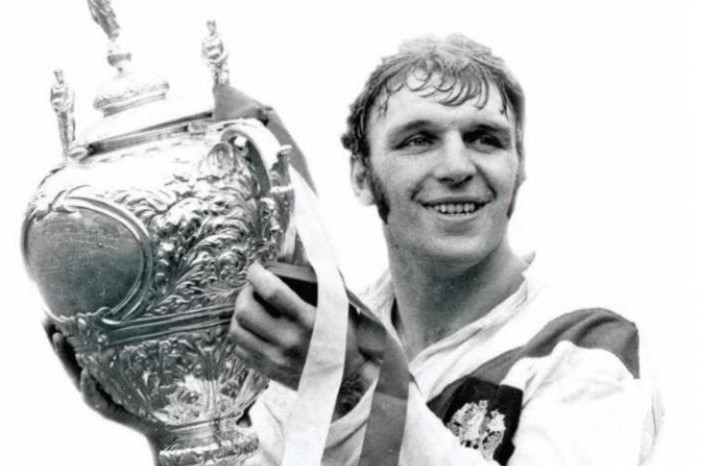 The 72 year old, who hails from Bynea in Carmarthenshire, also coached the Wales Rugby League side from 1978 until 1981.

Coslett played for Llanelli and Aberavon in rugby union and won caps against England, Scotland and France in the 1962 Five Nations Championship but it’s in Rugby League where he became famous after moving north to join St Helens later that year.

He had 15 seasons at Knowsley Road and was an outstanding goalkicker landing 1,639 in his Saints career and scoring 45 tries for the club. He skippered the team to Challenge Cup Final wins at Wembley in 1972 and 1976 and still holds the club record for most appearances and points.

He left to become player-coach of Rochdale Hornets in 1976, went on to coach Wigan for the 1979-80 season before returning to St Helens, coaching them for two years between 1980 to 1982. He is now St Helens’ Gameday Manager and life president of the club.

Internationally in Rugby League, Coslett won 13 caps between 1963 and 1975 and was famously in the Wales side that beat England 12-7 in the 1975 World Cup in Brisbane, a match that eventually cost England the title.

He is one of less than ten Welshmen to have scored more than 2,000 points in their rugby league career and with 3,545 points is seventh on British rugby league’s “most points in a career” record list behind Neil Fox, Jim Sullivan, Gus Risman, John Woods, Cyril Kellett and Kevin Sinfield.

Coslett said: “I am proud, overwhelmed, excited and humbled by this award.

“To get something like this at my stage of life is superb. I have been here for more than 50 years and I’d like to thank the many people who have helped me along the way.”

Wales Rugby League president Mike Nicholas said: “This is a well-deserved honour for Kel and for Wales Rugby League in general. He was and still is an absolute ambassador for game of Rugby League. You can see that from the work he does at St Helens.

“He was actually one of my heroes at Aberavon when I was growing up as he played in their Championship winning side of 1960-61. I was later honoured to play alongside him for Wales and he’s now a good friend of mine. A great guy and a humble gent.”

Wales Rugby League chairman Brian Juliff said: “Kel Coslett is a fine ambassador to Wales Rugby League and has been an inspiration to many Welsh players who followed his path into what was then the only recognised form of professional rugby.

“He is a legend throughout Rugby League and remains a popular ‘great’ former player amongst the St Helens Rugby League fans. Kel is a gentleman and the awarding of the British Empire Medal is a fitting honour to a true Welsh rugby icon.”