Welsh speaking schools dominated the Wales Rugby League Champion Schools Finals winning all bar one of the 2014 contests at Senghenydd RFC on Friday.

The only school to break to mould was Maesteg School who won the Champion Colleges / Sixth Form Final.

The year 7 final between Ysgol Gyfun Ystalyfera and Cwm Rhymni was postponed due to Ystalyfera’s involvement in the UK semi-finals. This will be arranged at a neutral venue at a later date.

Here is how the day panned out…

Ysgol y Strade were always in control to take the Year 8 Final with a 46-20 win over Ysgol Gyfun Cwm Rhymni.

Osian Dillon led the way for the Llanelli school with a first half hat-trick, including the opener in the first five minutes that was converted by Llew Phillips, the first of six goals for him.

The second from Sam Williams made it 12-0 before Cwm Rhymni got a try back through Shane Reynolds.

Dillon’s second and Strade’s third was an excellent 50 metre run which was grounded under the sticks.

Williams’ second of the game made the score 22-4 before Dillon completed his hat-trick with another storming charge that was again converted to make the score 28-4 at the break.

The second half was far more even as the sides scored three tries apiece.

Man of the match David Jones scored a brace for Strade while Dylan Howells and Rhys Thomas were both on the scoresheet for Cwm Rhymni, the first converted by Dewi Thomas.

Dillon got his fourth and Strade’s eighth of the game, converting it himself, but Cwm Rhymni had the last say with Reynold’s second of the game converted by Thomas.

Ysgol y Strade claimed their second trophy of the day in the Year 9 Final when again Cwm Rhymni were the gallant runners up.

The final score was 68-12 but on this occasion the West Wales side knew they were in a game, being held to just two tries before the break and even going 12-8 down early in the second half.

First half tries from David Jones and Josh Bowen gave Strade an 8-0 half-time lead after a tight first period.

Cwm Rhymni struck first in the second half with a converted try from Eli Shuffley to bring the score back to 8-6.

They then took a 12-8 lead after Thomas Rees scored under the sticks with Vitto Farina again converting.

But Strade fought back again. An unconverted try from Sion Tiplady levelled the scores at 12-all.

They regained the lead five minutes before the end with a fine run and try from Matthew Pearce. Substitute Osian Dillon, the year 8 boy who had scored four tries in the previous game, added the extras to give them an 18-12 advantage.

Dillon then followed that up with a two further tries for Strade to seal the win and for him to claim man of the match.

In their first season of Rugby League, Ysgol Gyfun Gymraeg Glantaf stormed to a 42-26 win over Pencoed Comprehensive School in the Year 10 Final.

What makes the result even more remarkable was that this was the first Champion Schools game that this bunch of Pencoed players had ever lost against another Welsh side in their four years of playing the game, having taken the years 7, 8 and 9 titles in the last three years.

Tom Ireland-Life’s unconverted score made it 10-0 before full-back Max Llewellyn’s try in the corner brought the score up to 14-0.

O’Brien was next over the line with his second and Glantaf’s fourth.

Ireland-Life followed suit from kick-off with this one being goaled by Manley to bring the score up to 24-0.

Callum Palmer forced his way over from close range to finally get Pencoed on the scoresheet and make the score 24-4 at the break.

Palmer notched his second of the game to open the second half scoring, this time converted by Josh Raikes to bring the score back to 24-10.

He then claimed his hat-trick to put them just 10 points behind.

However a storming run from Owen Jones, converted by Dafydd Manley gave Glantaf what looked to be a comfortable 30-14 lead with nine minutes to go.

Pencoed weren’t out of it yet. Tom Williams’ late try, converted by Liam Walters brought the score back to 30-20.

Then a clean break from Zach Taylor converted by Manley made the score 30-26.

But Pencoed dug their own grave when they dropped the ball from kick-off and Owen Jones went over from the resulting scrum. Man of the Match O’Brien’s run down the wing completed proceedings with Manley converting both.

Joe Condy’s charge through the back-line gave Cwm Rhymni an early 4-0 lead before a Matthew Roberts try, converted by Zac Agnew made the score 10-0.

Further tries from Jordan Gilbert, Joe Condy and Jack Calsford, all unconverted, made the half-time score 22-0.

The rout didn’t continue after the break and it took until more than midway through the second half for Cwm Rhymni to add to their score, loose forward Glenn Lucas grounded under the sticks with Agnew converting.

Man of the match was Cwm Rhymni hooker Nathan Davies who had a hand in many of the tries. 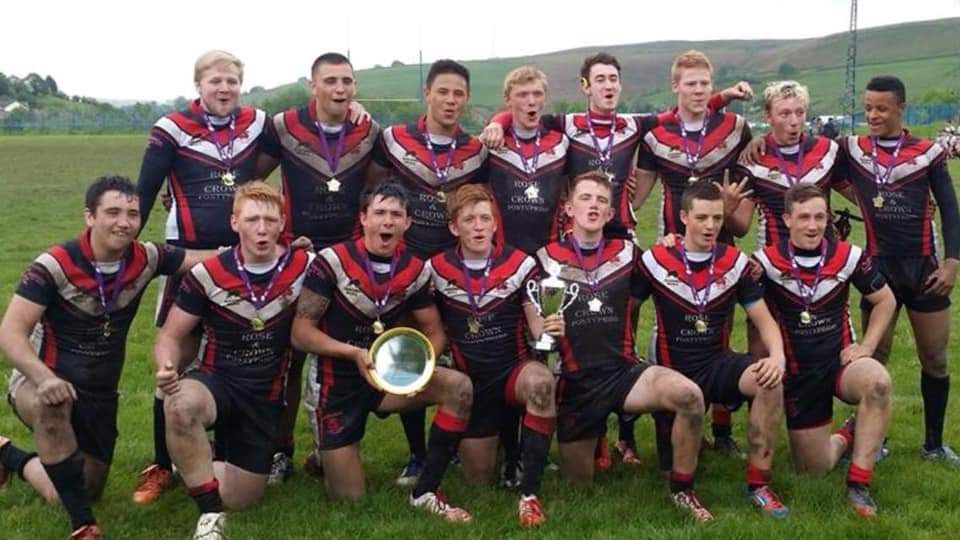 As expected, Maesteg School, home of the South Wales Rugby League AASE Academy, won the Sixth Form Final and also as expected, St John Baptist Church in Wales School of Aberdare, made them fight for the win, with their stand-off Connor Parker being the game’s star man.

Regan Grace went over in the corner to give Maesteg a 4-0 lead on the quarter hour.

Ben Jones scored under the sticks five minutes later, converting himself to make the score 10-0.

St John were proving to be tough opposition and they proved it when they clawed one back minutes later with a try by Josh James converted by Tom Harper.

However Maesteg’s skill soon took over. Unconverted tries from Morgan Jeffries and Zak Williams followed before Grace stormed over for his second and Maesteg’s fifth just before the interval. Williams converted to make the score 24-6.

Maesteg added to their score in the second half with tries from Jones and Dan Maiden, both converted by Williams, before St John nabbed a consolation via a Callum Morris try.