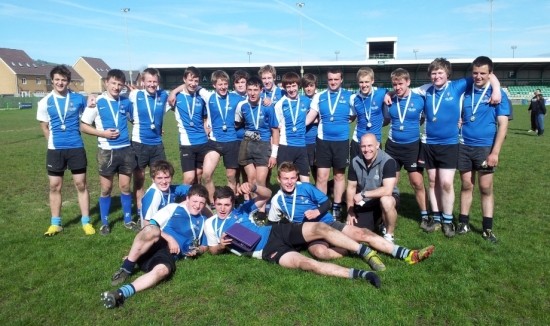 Monmouth inflicted revenge on Maesydderwen in the Year 11 Welsh Carnegie Champions School Final after winning 42-16 in Caerphilly on Tuesday afternoon.

But this time around, Monmouth were always in control despite going down to an early Maesydderwen try with Adam Green going over for the first of his hat-trick.

A mistake soon allowed Joe Light in to level the scores at 4-4 before a Dan Musselbrook try in the corner gave them an 8-4 lead.

Green soon scored his second to level the scores, but after that Monmouth pulled away.

They regained the lead on 20 minutes when Jamie Ridgeway dived under the sticks and Max Senior converted.

Jake Williams went over in the corner for their next try with Dan Dunmore following him over to make the score 24-8 at the interval.

Maesydderwen were first over the line in the second half when Green completed his hat-trick by scoring in the corner.

But Monmouth increased their lead further when Joe Light went over with Senior kicking well.

Senior scored a try of his own under the sticks and easily converted before Zac Williams, then Jake Williams added further tries, Jake picking up the ball well from a crossfield kick.

Senior dropped the ball over the goal for the final conversion, and move of the game to complete the scoring.