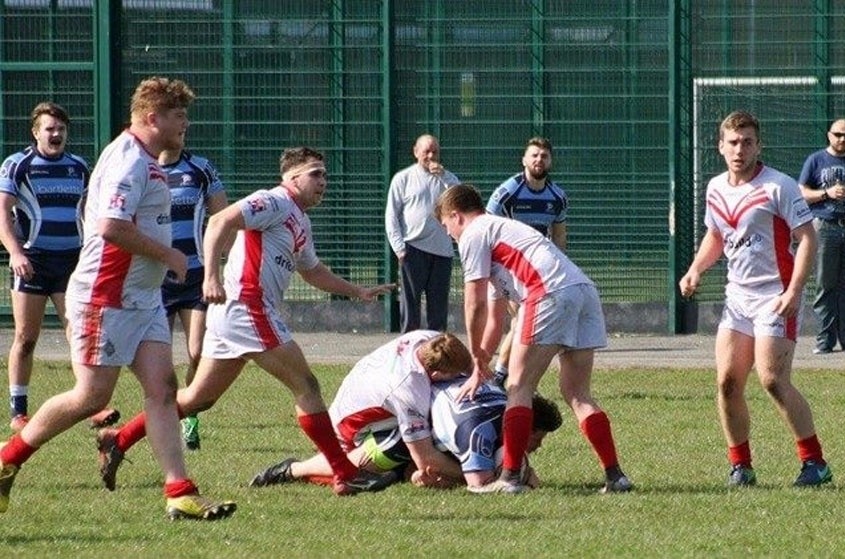 A big match that will go a long way towards the development of professional players in North and South Wales, debuted last Sunday in Deeside when a competitive North Wales Origin side, in their first ever game, were beaten 42-24 by South Wales Ironmen reserves.

It was a fiercely contested encounter that added to the friendly rivalry that exists between players in the South and North of Wales, who have been facing each other at senior and youth level for a number of years.

South Wales Ironmen Reserves are of course linked to the professional club, and they continued with their positive start to the season with a good performance against a North Wales side featuring a number of last season’s Wales Dragonhearts squad players.

North Wales Crusaders don’t, as yet, have a reserve side, but this outfit will do well to become a feeder into the Wrexham-based outfit so can look to field more Welsh born or based players.

Sunday’s encounter was also a chance for both sides to get a hit out before their big upcoming games.

South Wales make a welcome return to the RFL’s reserves programme this year, in the mix for the first time since the Celtic Crusaders days, and they’ll be travelling to Hull FC Reserves on April 8th, whilst the North Wales Select side take on Wales Students next Sunday at Deeside, the Students of course preparing for the Student World Cup in Australia this July.

Rhys Gant will be pushing for a place in the Ironmen’s first team squad after scoring four tries whilst Kade Breen, a native of Adelaide in Australia, scored a hat-trick. Tries from Brandon Lamb and Lloyd Selby-Smith completed matters for the away side whose score could have been higher save for Ben Jones’s off-day with the boot, converting just two from seven. Gant and Fraser Stroud also missed conversion attempts.

With the score at 30-12 at half-time to the Ironmen, North Wales did well to draw the second half.

South Wales Ironmen Reserves coach Dafydd Hellard said: “I’m impressed with the way the boys acquitted themselves today. There were a few late changes to the squad over the weekend but that didn’t disrupt our performance and the boys that came in more than stepped up to the mark and will provide a few headaches for head coach Paul Emanuelli who was on first team duty today.

“The boys performed exceptionally well in our outing two weeks ago against Halifax and today was a great opportunity to put into practice some of the things we’ve been working on at training.

“The match officials frustrated us today by slowing down the pace at which the game was played but the pleasing thing was to see the boys making adjustments themselves out on the field and alter the style of play that was needed.

“In training we always test the boys by presenting them with unfamiliar scenarios and challenge them to find their own solutions to problems, so it was great to see some of the senior boys in the squad take control and alter our approach.

“There’s a real buzz surrounding the squad at the moment and the boys are working hard for each other in training and in matches, everyone involved is excited for the Hull game. We’re in a fantastic league this season and credit must go to the owners for working tirelessly to get us into the league we’re involved in, with some top fixtures against Championship and Super League opposition.”

“Two senior players withdrew on match day which led to late positional changes and challenge us, but the lads played expansive Rugby League which was pleasing from a coaching viewpoint.

“All players in our squad are selected via birth, residence or academic study in the North Wales region so it’s a healthy regional side that is a step forward in the development of players for North Wales Crusaders.

“We now have a quick turnaround now until our second game with Wales Students offering another test. They had a close game against Ironmen Reserves recently and raised a lot of money for their cause when they played down there. We’re now happy to be hosting them and we wish them luck in their World Cup campaign.”