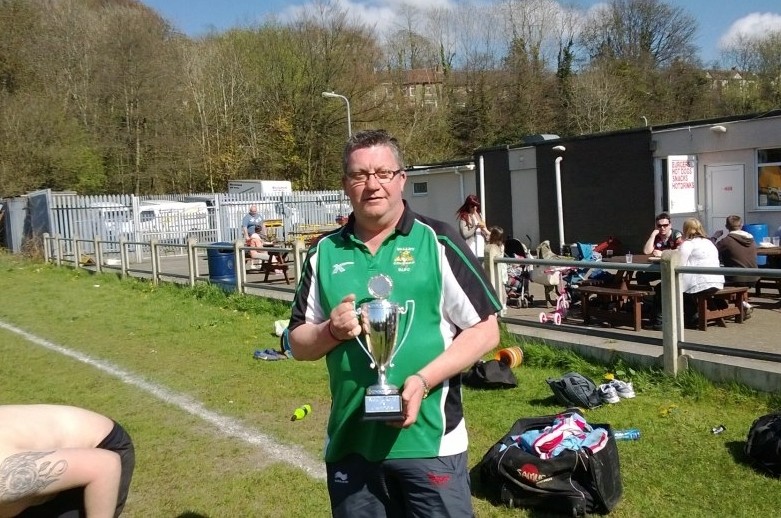 The tributes have poured in for Rhondda Outlaws RLFC chairman Clive Batchelor who died suddenly on Monday 13th August 2018 aged 53.

Batchelor helped to establish the open age side at the Outlaws two years ago after they were originally founded as a junior club.

Before that, he worked tirelessly for many years at Valley Cougars where he held the roles of team manager and then chairman.

He was also a big follower of the Welsh representative game, especially the Wales Dragonhearts where he was always proud to watch his players gain international honours.

Professionally, he worked as a psychiatric nurse in St Tydfils Hospital and in the community sector in Merthyr before having a complete change and working in security.

Brought up in the Rhondda Cynon Taff, where he attended Mountain Ash Comprehensive School, he lived for many years in Merthyr Tydfil.

A statement from Rhondda Outlaws read: “Clive worked tirelessly to help establish the senior team at the Outlaws and he instilled his sense of integrity, respect, decency and most importantly his passion for Rugby League in to the club. Although we have lost the keystone of our club, his hard work and dedication will ensure the Outlaws can continue on and strive for future glory.

“To honour the man who honoured us with his love, we will be dedicating our Player of the Season award to Clive. It will forever be known as the ‘Clive Batchelor Award’ and will be presented annually to the Outlaw who gives his all for his team. A fitting tribute to a man who gave his all for the Outlaws.

Valley Cougars’ statement read: “Clive was always such a passionate fan of rugby league and has been a big influence on the sport in South Wales. Not only was he a big part of our team but more recently helped found the Rhondda Outlaws (open age side).

“His passion for rugby league helped drive the success that we as a club have today and the values he instilled in us early on are still evident. He was massively influential in the early stages of the club and set the blueprint for where we are now. A massive character off the field and was always there for players when they needed him, a true Cougars legend.

“From everyone within the Cougar Family you will be missed. RIP.”

Shaun Watton, who has been a regular in the Outlaws side since their first open age game in May 2017, said: “I can’t believe the news that I woke up to this morning. Another true gentlemen taken too soon. Clive Batchelor will be truly missed – thanks for everything mate. My thoughts are with your family at this sad time. I will miss the messages of encouragement and support form you mate. Rip Clive x #OutlawFamily.”

Dafydd Hellard, the current player coach at Valley Cougars said: “This man is the reason I got involved in rugby league and the reason that I’m still involved today. He was always on the end of the phone when you needed him and I can’t remember him ever missing a training session or game. Plus he got me out of some trouble with the RFL and WRL, he wrote a great apology letter. Thanks for everything Clive, love you big man.”

Chris Thair, CEO of Wales Rugby League, said: “Clive’s passing is tremendously sad and we pass on our condolences to his family and friends. Sport is insignificant when compared to such things and he will be sadly missed.”

West Wales Raiders have announced that there will be a minute’s applause on Sunday before the South West v South East Origin match at Stebonheath Park (11.30am), and again before Raiders v Coventry Bears (3pm), which is the second game of the double header in Llanelli.

Everyone at Wales Rugby League also sends their heartfelt condolences to all of Clive’s family and friends.

He is survived by his mum Beryl, his wife Jacqueline, sister Carole, daughters Cerys and Rhiannon and his three grandsons – Tom, Max and Teddie.