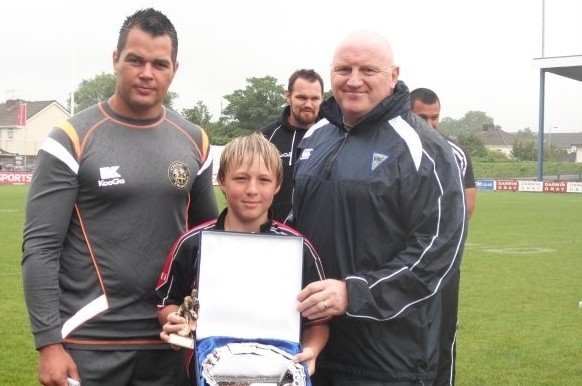 His wife Tessa made the following announcement early on Wednesday morning…

“He really did kick cancer’s backside and confound every single expert opinion, living with glioblastoma for over 20 months. I am so thankful that he never had any pain throughout his illness.

“I’m so proud of being Mrs Roddy and for having the most amazing life with Martin. Of course I’m very sad but I have plenty to smile about too. We achieved so much during those precious months that we never thought we would have. I know we are soulmates and our love is eternal.

“The service will take place on Wednesday 25th July at 2.30pm at Cheltenham Crematorium. At a later date I will be taking Martin to the family church in Ireland for a private family Mass; his ashes will be buried there.

“I will be posting full details of the service, Martin’s wishes for dress code and donations once they are finalised as well as the venue for after. I’ve no doubt that so many of you will wish to come and send my Poppet on his way and you are all welcome.”

Roddy was a massive rugby league fan and served on the Wales Rugby League board since the start of this decade, only recently resigning when his health started to suffer. When WRL achieved a Level 3 safeguarding award in early 2017, this was dedicated to Roddy, who had been the long-time stalwart of safeguarding within the organisation and the main instigator in ensuring that it was of the highest priority.

However this far from his only input into the management of the 13-man game. Originally from Manchester, he was a big Warrington Wolves fan and made regular trips up there with his wife Tessa to watch Super League matches.

He regularly assisted Celtic Crusaders community manager Matt Pritchard when the former Super League side were based out of Bridgend and also when they moved to Wrexham.

A regular attender at South Wales Scorpions in their early years, he presented a trophy for outstanding achievement at their first couple of award nights in 2010 and 2011.

In Wrexham in 2011, he, along with Matt Pritchard, founded the organisation that eventually became the North Wales Crusaders Wheelchair Rugby League Club.

He joined new semi-professional club Oxford RL in 2013 as assistant coach, remaining there for two seasons, before transferring his support and expert advise to his far more local club University of Gloucestershire All Golds, who were based in Cheltenham between 2013 and 2017.

He was also a rugby union fan and due to his Irish roots, was a regular fan at London Irish.

A policeman by trade, Roddy retired in 2010 after 30 years with the Gloucestershire Constabulary, having begun his working life as a labourer, a salesman and a teacher of history and PE at schools in London and in Kent.

In 2000, he was honoured by HRH the Prince of Wales for charity work and he was both overwhelmed and honoured to be awarded an MBE in the Queen’s Birthday Honours List in 2003 for his services to the police.

Such was his passion for raising money for charity, since his illness, some of his close friends continued his work. In just two examples from last year, his friend Zac France raised money for the Sue Ryder Trust by staging both rugby and boxing events, whilst his Warrington supporting friend Steve Herridge cycled from Swinton to Warrington, raising money for the Warrington Wolves Charitable Foundation and the radiotherapy unit at the Great Western Hospital in Swindon.

Everyone at Wales Rugby League sends their heartfelt condolences to his Tessa and his family and friends.