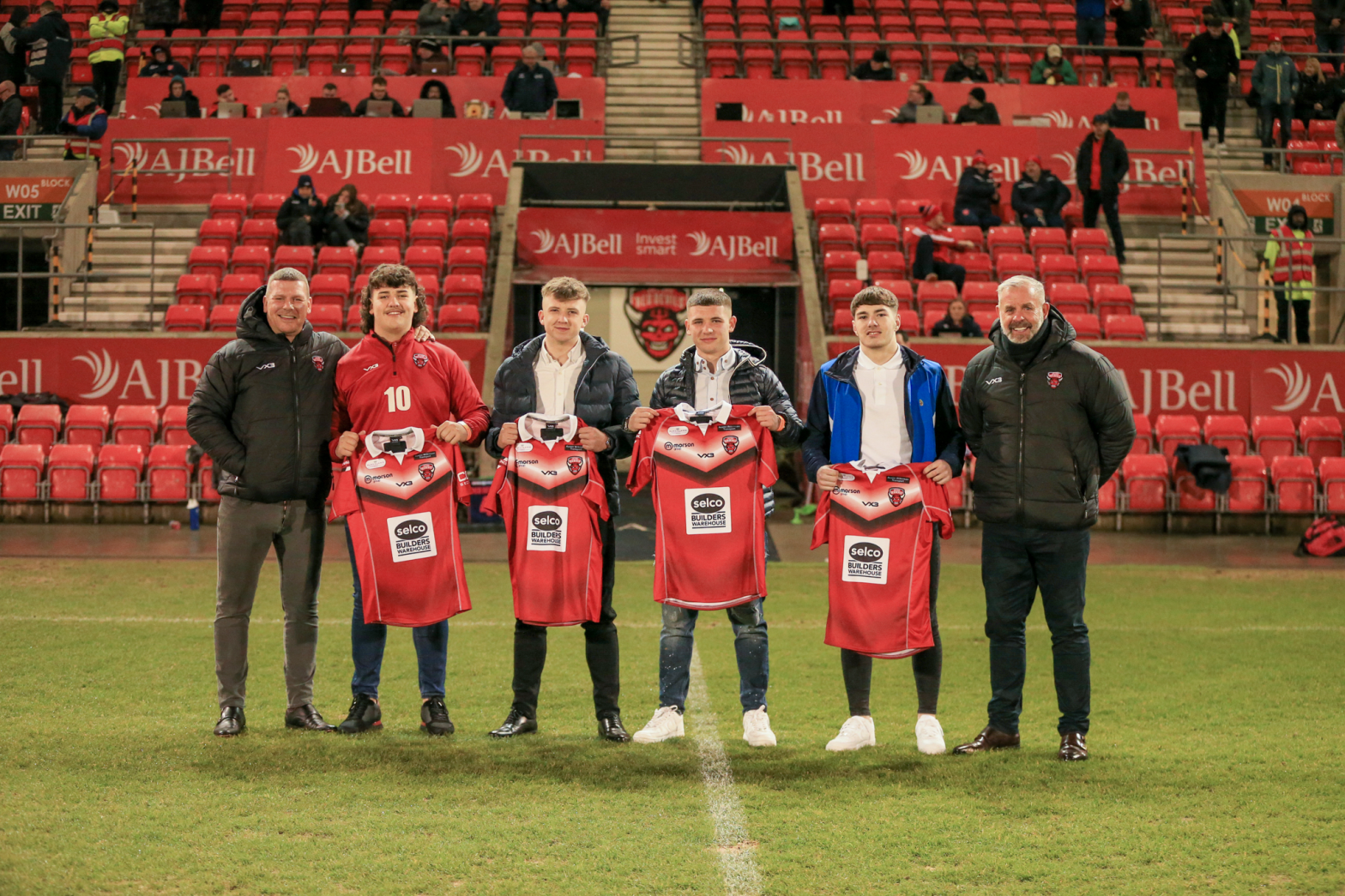 Salford Red Devils have announced the signings of the first four graduates from their REDS programme.

All four players are part of the Wales Rugby League National Development Academy, and have been identified as part of the successful partnership with Coleg y Cymoedd and the Super League club.

Gareth Kear, CEO of Wales Rugby League said: “I first discussed the idea of a partnership between Wales Rugby League and Salford with Paul King in 2019. Further discussions followed with Paul Trainor and Ian Blease. It was very obvious that we all held the same values and vision. These four players are the start of many more to come from Wales and will feed fresh blood into our international squad for the 2025 World Cup campaign. I would like to put on record my thanks to all our amazing WRL community clubs for their outstanding development work together with Coleg Cymoedd and Mark Jones.”

Mark Jones, the National Development Manager at Wales Rugby League, said: “The partnership between Coleg y Cymoedd, Wales Rugby League and Salford Red Devils has gone from strength to strength. It gives me great pride watching the boys fulfill their dreams, it is why I work in development. The boys have worked hard and have been rewarded with their first professional contracts, joining Ieuan Roberts, Jake Lee and Joe Coope-Franklin who signed for Salford Reserves last year.”

Paul Berry, head coach of Wales Rugby League U16s, said: “Having seen these four players first hand over the past few years through the Wales U16s and U17s programmes, I’ve seen the dedication, commitment and sacrifice that they and their families have made to put themselves in a position to progress into professional rugby league.

“All four players were stand out performers as part of the Salford Red Devils’ REDs programme and the Salford U18s squad this year, but the hard work starts now for them to take their game to the next level again. Hopefully these signings will inspire the next wave of U14s, U15s and U16s currently in the Wales RL pathway programmes, run by WRL National Development Manager Mark Jones, and prove that there are opportunities to progress to Super League and the International Men’s team if they show the same level of commitment and desire as Billy, Scott, Finn and Conor have over the past few years.”

The REDS programme is the Salford’s Elite Development squad for 14 to 18-year-olds. The work of the Red Devils since October in creating a top-quality player pathway programme has been significant. The club were delighted to be rewarded by the RFL with a number of U16 and U18 Academy games in the early stages of the season and all four of the new signings played in their recent U18s game against Wakefield.

The player pathway staff are very excited by the talent in the REDS programme, especially the four players. Chris Irwin, the head of the REDS programme, said: “I’m delighted to see these boys sign professional terms at our club. I have been blown over by their enthusiasm, work rate and technical ability when working with them, they have huge potential, and it is great to see the club investing into that. Huge credit to everyone involved in their development, there is some incredible work being done in Wales and I hope to see more players coming through our pathway over the coming years.”

Ian Blease, Director of Rugby at Salford, said: “Really great news for our club to now have signed the next cohort of players from and through our partnership with Wales Rugby League and Coleg y Cymoedd. My congratulations to Billy, Scott, Connor and Finley, we now look forward to developing their careers at the Red Devils. These second-year batch of player signings comes off the back of some real effort and hard work on and off the pitches in Wales from Paul Berry our Welsh Partnership Coach and Chris Irwin Head of Elite Development at the club, well done everyone!”

The club would like to thank the Salford Red Devils Supporters’ Trust for their ongoing support of the player pathway programme. This has been invaluable in creating a programme that produces players who are well versed in the club’s DNA, the ‘Red Thread.’

Do you want to study and play rugby league on a full time college course at Coleg y Cymoedd and perhaps eventually play in Super League? For more information, please go to https://www.cymoedd.ac.uk/course-detail/?course=08302B