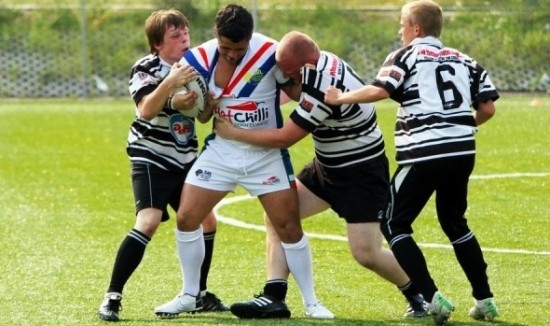 The hooker, along with club, country and university teammate Simon Wright, linked up with Great Britain Pioneers Rugby League on the tour to Poland immediately after being crowned Student Four Nations champions with Wales.

“It all happened quite quickly really,” he noted.

“Less than 24 hours after we had beat England I had a phone call from the GB team manager inviting me on the Pioneers tour.

“But it has slowly started to register what has gone on this past month and I think people are getting a bit sick of hearing about it.”

The Pioneers’ purpose is to take rugby league to new areas of the world having visited Kazakhstan in 2010, Greece in 2011 and now Poland.

The Pioneers took on Lodz Magpies – Poland’s first rugby league club – winning 98-0 and 82-0 before participation was extended to a Polish select XIII in the tour’s final game, which ended in a 158-0 win for GB.

Despite the heavy score lines Singleton believes the tour has created a platform for rugby league to further extend its boundaries.

“The game time out there wasn’t about us flexing our superiority but it to show how the game should be played in terms of style of play and the spirit of the game.

“The Polish lads developed much more throughout the week – even if the score lines don’t show it –and we have definitely laid the foundations for future development of rugby league in Poland.”

Aside from playing, the trip gave the 20 Pioneers the opportunity to visit one of the world’s most iconic locations.

“The trip to Auschwitz is one of the most moving things I have ever been a part of – what went on there is something I feel everybody should know about and I would certainly advise anyone to go visit.

“We also briefly past through Krakow which had some nice sights, as well as doing a coaching session in the largest man-made Forest in Europe.”

Representing the Pioneers followed the Salford-born hooker’s first international Student honours, when he joined six other South Wales Hornets teammates in the Wales squad for the Student Four Nations.

And whilst it may not have been his country of birth, Singleton ranks it as his pinnacle achievement.

“Without a doubt it is the highlight of my rugby career to date.

“Hearing people shouting ‘Wales’ from the stand and seeing people who have helped develop you as a player is something that I will struggle to ever match.

“Combine that with a group of players who remained professional throughout the entire tournament and bonded better than most international teams will, you can get a brief glimpse into what an amazing week it was.”

Having returned to Wales on Sunday, Singleton revealed it would not be too long before he was jetting off again.

“I have a holiday booked in a few weeks which I will be going on and that will hopefully get me over a few knocks that I have picked up in what has been a hectic couple of months.

“After that, I’ll be back to help the Hornets into the play-offs which would cap a memorable season for me.”