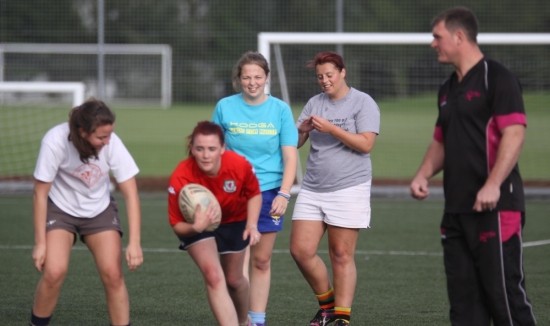 South Wales Scorpions launched their ladies team on Monday with the first ever taster training session in Treforest.

A wide range of talent attended the historic taster session with some ladies having played Rugby League before, some regulars of the 15-person game while some were new to any form of rugby.

Dallimore was honoured to help take the session and believes that there is a lot of promise in the first batch of players.

“It’s good to see other people is South Wales taking an interest in playing Rugby League,” he said. “It’s great to see so many girls here today and hopefully we can get a few more here to the next session and progress from there.

“There were some who had some really good skills, you could tell that they’ve played rugby before. For some it was their first time but they showed a lot of promise. It was good to see.”

Parry, who has also coached University of Glamorgan and founded Treharris Phoenix RLFC, was teaching the new starters how to play the ball and many other skills. He too was impressed by the standard and enthusiasm of the trialists.

“It was a good session,” he said. “It was a nice little turn out especially as it was only the first one. Obviously more or less all of them are new to Rugby League so it took them a little while to click on to the basics of the game, but once they started getting it, they were looking quite sharp.

“Great to see 13 down here to start with but imagine that there will be more and more especially when word gets round. It’s Wales isn’t it? It’s a rugby place so I’m sure we’ll get a side easily and be competitive.”

Louise Tyson, who along with Rebecca Whiteley, organised the session and she was delighted with the good turn-out, saying that there were many ladies who were unable to make this first session but are keen for the future.

“I thought it was really good and productive,” she said. “It was nice to meet the girls and see how much experience they have. I was pleasantly surprised by the level of talent we have here today.

“It was my first time playing Rugby League after playing union before and I did find it a bit complicated at first. But when I got into it and started playing, it became easier, and we obviously had some brilliant coaches today.

“There were some potential players who were away this week so numbers were a little down but I think that they will grow as the weeks go on.”

The new side have already had offers to play a friendly and hope to turn out for the first time in October, to coincide for when Wales take on England in the men’s game, before kicking off competitive Rugby League from next spring.