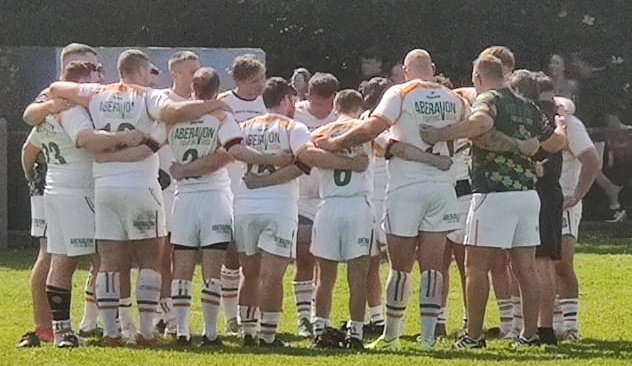 Nearly two decades ago, the powerhouses of rugby league in South Wales were Bridgend Blue Bulls and Aberavon Fighting Irish.

In 2003 and 2004, they met in the Welsh Grand Final with Bridgend winning on each occasion. They even met in the first ever Welsh Conference match back in 2003 with the Bulls winning 56-16.

Now, this Saturday at Pyle RFC, the two sides will meet again, in what will be Aberavon’s 50th match in competitive open-age men’s rugby league, having made a comeback in 2022 after 16 seasons away from the game.

The final score was 34-18 with Isaac Morgan leading the way for Aberavon scoring a hat-trick of tries and kicking two goals. Owen Evans, Dylan Agar, Cole Quinn and Nathan Evans also went over for the Irish. Black Dragons’ reply came from two Leighton Llewellyn tries, one each for Dyfan Harris and Cullen Furber, with a Jayden Burton goal.

Bridgend had a 74-24 win at Aber Valley Wolves last week. Amongst their 13 tries were two from Ieuan Ace with Stuart Robson and Dale Wood also scoring. Bridgend stalwart Gareth Howells, who is now in his 13th campaign with the club, was also on the scoresheet with tries and goals.

The top of the table has a familiar look about it, for those who remember those early years, but with Aberavon’s only win over Bridgend coming in their penultimate encounter in 2006, the away side will certainly want to made amends this time around. 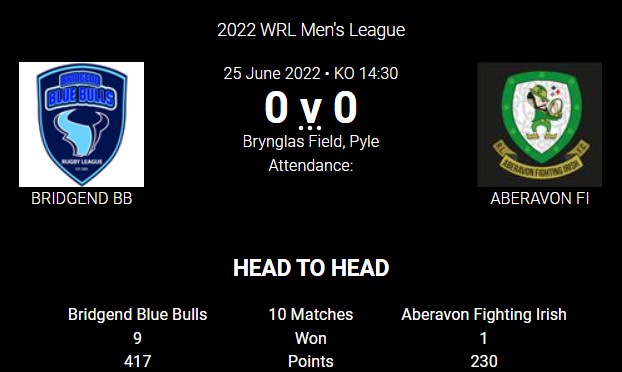 Aber Valley Wolves, who have the largest junior set-up in the whole of Wales, have also been away from the open-age league for a few years. Back in for the first time since 2016, they’ve suffered defeat in their opening two games. However in their side when they faced Bridgend last Saturday was former rugby union professional Jason Tovey, and he immediately made an impact in his first rugby league outing since he was a junior by scoring a try and kicking two goals. Tobias Davies, Ieuan-Rhys Beal and Evan Moore were also amongst the scorers.

Tovey stated on his Twitter page that he would keep going, which is good, as the Wolves host Cardiff Blue Dragons this Saturday looking to preserve an unbeaten record against them. The capital side have had mixed fortunes in their first two games, losing to Aberavon and then beating Rhondda Outlaws 40-26 last Saturday. Duane Iles scored two of their nine tries, with Dylan Humphrey, Morgan Farmer-Gratton, Nathan Tucker (who also kicked three goals), Michael Williams, Scott Simons, Corey Imperato and Brecon Williams also going over. 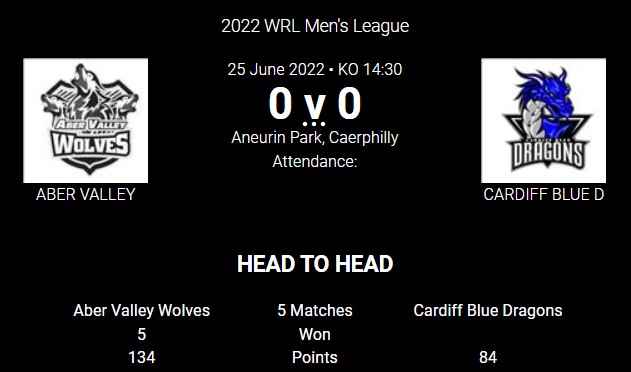 The Outlaws’ loss to Cardiff came off the back of an opening day win against Aber Valley, so they’ll be wanting to bounce back this week when they travel to the Black Dragons in the first men’s 13-a-side meeting between the two clubs. On the scoresheet for Rhondda last week were Danyl Davies, Mason Phillips, Cody Rees and Rhodri Garland who scored tries, with Chris Harris kicking five goals.

There was just the one game in North Wales last week and it was a dominant performance from Flintshire Falcons as they put 19 tries on newcomers Bangor Buffaloes. Billy Forrester was the star performer as he racked up 26 points, consisting of four tries and five goals. James Jackson and Aidyn Jones also crossed for four tries each with Harrison Til, Ryan James, Matthew Worrall and Claudiu Purda each scoring once. Morgan Johnson also got a try and kicked two goals. Bangor did manage two tries and a goal in the 92-10 defeat. Jack Harder with six of the points and Benjamin Dobson also touching down.

This week in North Wales, Flintshire Falcons take on Conwy Celts, the details of which will be announced soon.