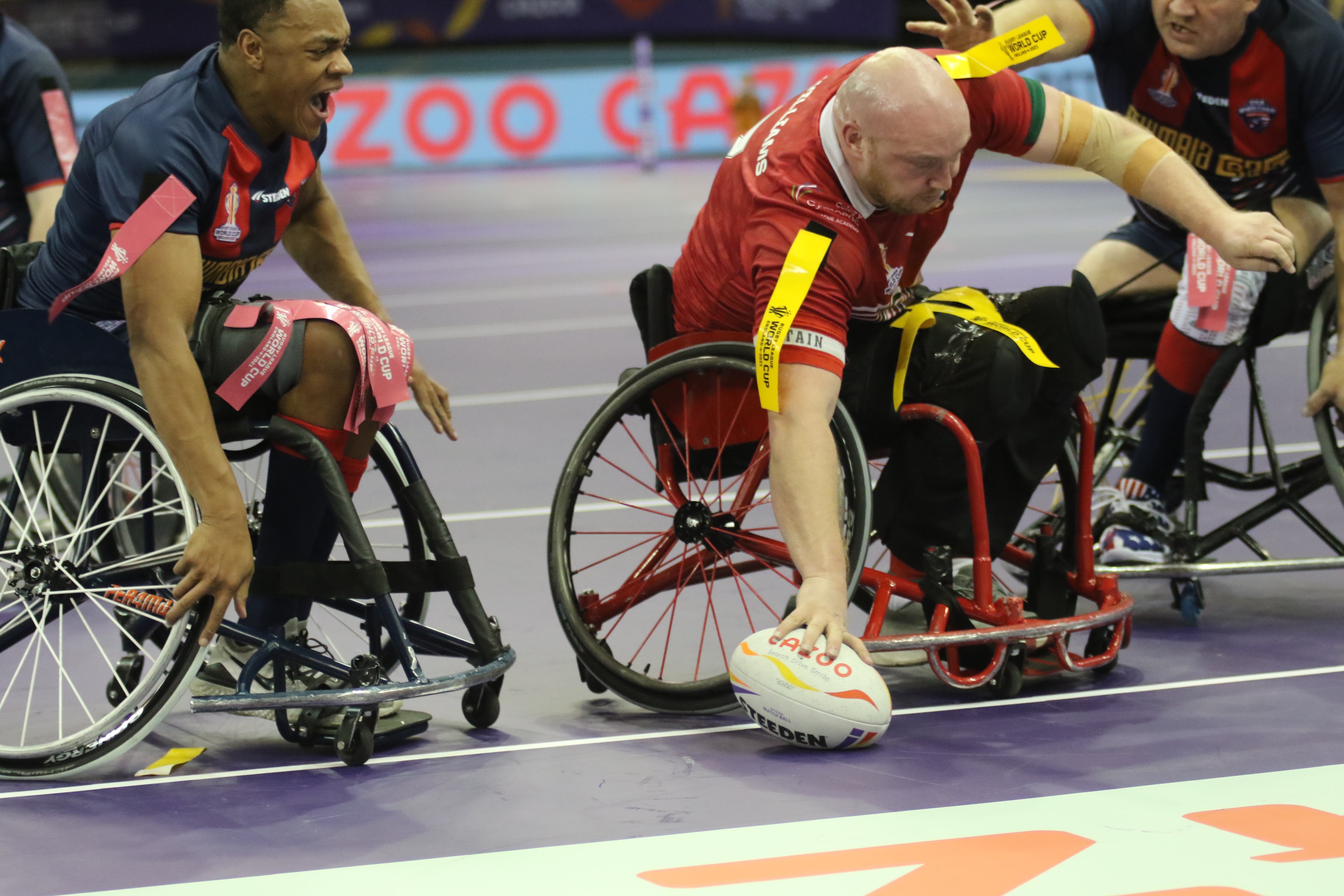 Wales Wheelchair captain Stuart Williams has been named in the “Team of the Tournament” for the Wheelchair Rugby League World Cup.

Leading by example, Williams played in all four of Wales’ matches during the campaign, scoring a hat-trick of tries against USA and one try against England. This increased his Welsh record try total to 63, scored in just 30 appearances.

Voted for by a selected specialist panel* comprising of former players, ambassadors and members of the media, the wheelchair team is made of the 10 most selected players from the panel.

Williams was also named in the long list for World Player of the Year (Golden Boot) but didn’t make the short list, and he will be a guest on BBC’s World Cup Final coverage this Friday evening.

Wales coach Stephen Jones said: “I’m so happy for Stuart to have made the Team of the Tournament. With his passion, skill and determination during the World Cup, he is the perfect choice in my mind.

“Stuart led from the front for the two weeks we were there and I’m sure this honour will prove what a star and asset he is both on and off the pitch.”

Williams said: “I’m deeply honoured and grateful to be named in the Team of the Tournament. This really means a lot to me. I’d like to thank all of my teammates, coaching and management as without them being so supportive on and off the pitch, this wouldn’t have happened and they all deserve a part of this. Thanks as well to all my family, friends and work colleagues for supporting me.”

Wheelchair Rugby League has captivated everyone who has watched it, with the incredible skill, physicality, and passion of the players earning admiration and praise from fans from all over the globe. Friday’s final (18th November) will see England vs France, as the two best teams in the world battle it out for glory.

The RLWC2021 Wheelchair Team of the Tournament is;

For the first time in history, all three codes have been competing concurrently at RLWC2021, and fans have been treated to some scintillating rugby league. From well-known superstars living up to expectations, and newcomers taking the tournament by storm, RLWC2021’s panelists had plenty of players to choose from when it came to selecting the Teams of the Tournament.

In the men’s tournament, holders Australia will face Samoa in the final on Saturday 19 November, and the finalists have nine players between them in that Team of the Tournament.

Australia’s Josh Addo-Carr has been electric for the Kangaroos, crossing the whitewash an incredible 12 times so far at RLWC2021. Addo-Carr is joined by fellow Aussies Cameron Murray, Liam Martin, and Harry Grant. For Samoa, their talisman Jarome Luai makes the Team of the Tournament, as well as semi-final hero Stephen Crichton, Brian To’o, Tim Lafai, and captain Junior Paulo.

England, Fiji, New Zealand, Papua New Guinea and Tonga are the other nations to be represented in this all-star team.

The RLWC2021 Men’s Team of the Tournament, which includes a side of 13 and 4 substitutes, is;

Notable additions are Papua New Guinea’s Elsie Albert, Canada’s Megan Pakulis, and Brazil’s Franciny Amoral, who all lit up RLWC2021 with their performances.

The RLWC2021 Women’s Team of the Tournament is;

Jon Dutton, Chief Executive at RLWC2021 commented: “We have seen some incredible team and individual performances across all three tournaments at this fantastic Rugby League World Cup over the last five weeks.

“To be included in the Team of the Tournament is something these athletes will be able to cherish, and to be recognised on the biggest stage of all is a testament to their athleticism, skills and determination.”

With finals taking place in Manchester this Friday 18th, and Saturday 19th November, fans can still witness history, as the men’s, women’s, and wheelchair World Champions will be crowned. To secure your tickets, visit https://www.rlwc2021.com/tickets