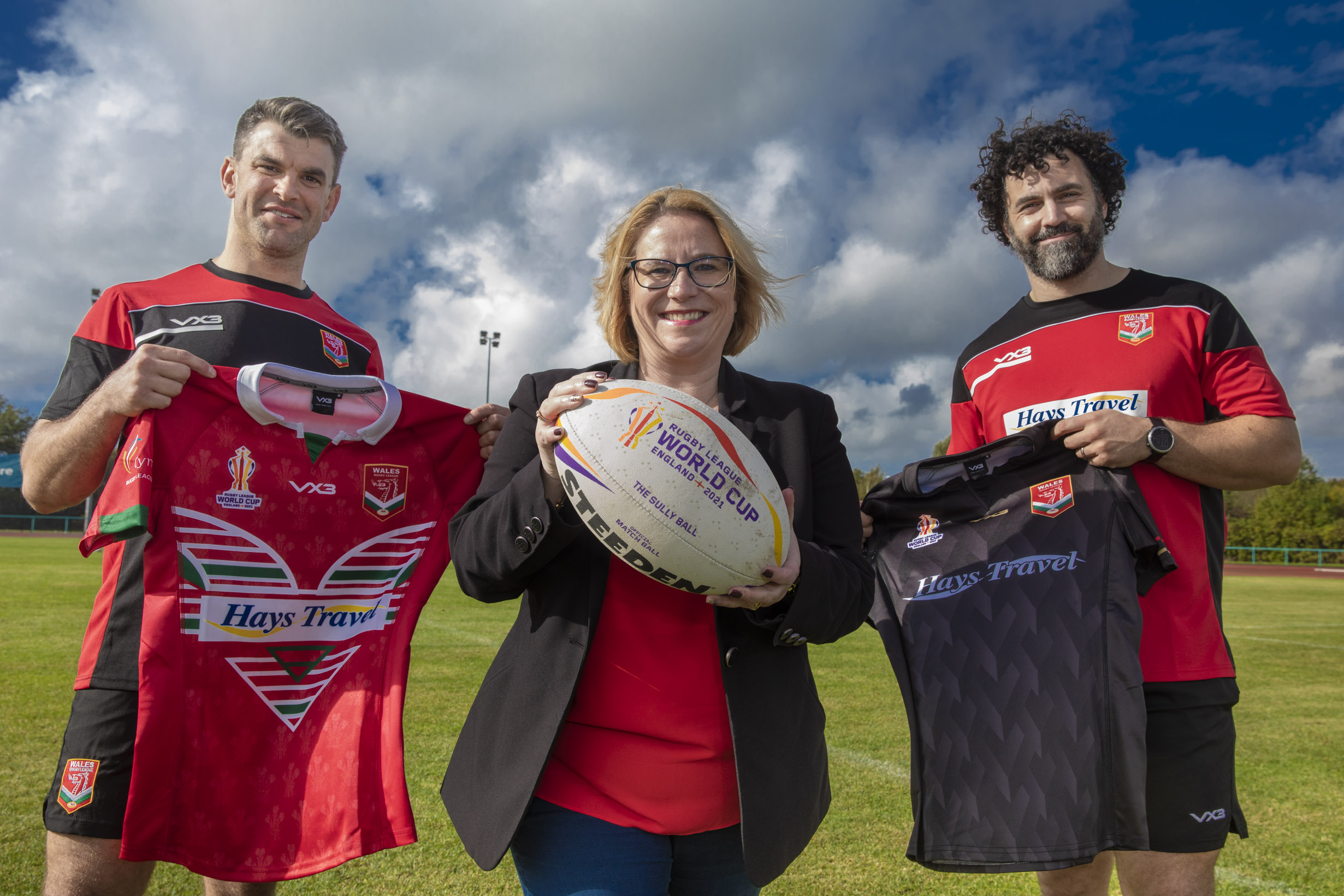 Wales aim to be going places when the Rugby League World Cup kicks-off this month with a major sponsorship by the UK’s largest independent travel agent.

Their red shirts will be proudly emblazoned with the brand logo of Hays Travel for the prestigious tournament which kicks-off in the game’s northern powerbase on Saturday, October 15, when England take on Samoa at St James’s Park, Newcastle.

Wales are in action the following Wednesday evening, October 19, at Leigh against the Cook Islands, kick-off 7.30pm, and they’ve been handed a triple dose of Southern Hemisphere opposition with Tonga and Papua New Guinea making up the group.

It’s a mouth-watering prospect for Wales skipper Elliot Kear who will be the second person from his year at Whitchurch High School, Cardiff, to captain his country at a World Cup.

Sam Warburton in rugby union was the first while the third of a remarkable hat-trick will be Gareth Bale when he leads the Wales football side at this December’s World Cup in Qatar.

It’s a third World Cup for Bradford Bull Kear, 33, said: “It’s a bit surreal. I didn’t play much football in school but I played rugby with Sam and with Gareth and Gareth was really fit and fast but from the age of 15 he was really concentrating on his football with Southampton.

“For the three of us to captain our country is great for the school but I’m under no illusions we’ve got a tough group and I think Tonga could well make the final so we’ve got to really focus on beating Cook Islands and Papua New Guinea.

“We’ve got a great group of boys with a good atmosphere and we really want to play for each other and for Wales and it’s a huge honour for me to captain Wales in a World Cup, one of the highlights of my career.”

Williams and Kear were team-mates at London Broncos and Salford and Williams, who lives in Hawarden and has scored 22 tries in his 30 internationals, said: “I’m looking forward to the World Cup massively. The squad have been together for a long time and we know each other very well.

“Culture wise that’s a good thing and it’s a pleasure to be training with them but with it being a World Cup all the squads are strong although you wouldn’t have it any other way because you want to play against the best in the world.

“All the games are going to be tough. We’re playing three Southern Hemisphere teams so you don’t get to play these players every day so it’s an exciting prospect but no-one is getting ahead of themselves.”

Don Bircham, Managing Director of Hays Travel North West is excited about the prospects for the tournament and said: “We’re thrilled to be involved in a major sporting event with a global audience and one that fits particularly well for us with our strong presence in the North West and North Wales.

“There’s a massive following for rugby league here and Wales has a historic bond with the game with so many of its greats having come north, including the current Wales chairman, Brian Juliff.

“It is an honour for Hays Travel to be on the red shirt of Wales which has been worn by icons like Iestyn Harris, Kieron Cunningham and Jonathan Davies and back through the years by John Bevan, Clive Sullivan and Billy Boston.

“Many rugby league fans will know our brand as we have a strong presence in the North West including stores at Warrington, Widnes, Rochdale and St Helens where Wales’s second group game against Tonga is at the Saints’ Totally Wicked Stadium so this sponsorship is a perfect fit for us.”

Wales remarkably have two sets of twins in the squad, Connor and Curtis Davies, from Swansea, and Bridgend’s Ben and Rhys Evans and a set of brothers, James and Ollie Olds, also from Bridgend.

Brian Julliff, Chairman of Wales Rugby League, commented: “We’re thrilled to welcome such a recognised name as Hays Travel as a partner for our men’s team during Rugby League World Cup.

“With two of our three group fixtures in the north-west, and with a branch in Wrexham, Hays Travel are perfectly placed to benefit from the brand exposure locally during the tournament.

“Beyond that, the broadcast coverage on the BBC means that the Hays Travel brand will be seen nationally, and internationally with the tournament going into homes worldwide.

Don Bircham set up Hays Travel North West with a single travel agency in Mold town centre in 2000 and his network of agencies are now the main partner of the hugely successful Hays Travel, based in Sunderland, the UK’s largest independent travel agency.