All three Wales elite international sides played at the same time for the first time today, with Wales women picking up silverware. There were mixed results for our wheelchair and men’s sides as they prepare for the Rugby League World Cup…

Wales clinched the Rugby League Women’s European Championship B North championship in style after hammering Ireland 44-4 in Dublin on Saturday.

The hosts, who fielded four debutants only had the better of the game in the first 15 minutes. After that it was all Wales as they dominated proceedings.

An early 40-20 gave Ireland the perfect first opportunity to score, and they didn’t waste it. From the second tackle of the resulting set, Ali Coleman crashed over. Philippa Birchall missed the conversion attempt.

A dropped ball from a high bomb let Ireland in for a second chance, but the Welsh defence held firm on this occasion.

Wales, with no new capped players in the side, fought back and from a good passing move, Amberley Ruck slipped through to level the scores. Kathryn Salter kicked well to give the away side the lead.

They extended their lead in the 24th minute. After winning a repeat set, it was another good set of passes which gave Rosie Carr a chance she didn’t waste. Salter couldn’t convert but Wales were 10-4 up.

Wales kept up the pressure and were rewarded just before half-time when Rosie Carr ran in for Wales’ third try that Salter improved to give her side a 16-4 half-time lead.

The Welsh came out strong in the second half and it took just a minute for Charlie Mundy to extended their lead. Salter converted again.

Without the ball getting back into Irish hands, Wales scored again. This time it was Lauren Aitken, who pushed her way passed all who tried to stop her. Salter converted again for an unassailable four try lead.

Wales weren’t finished yet. Leanne Burnell ran in for Wales’ sixth try of the game and Salter again kicked the extras.

The next try came with 14 minutes remaining. Molly Reardon dived over and Salter converted.

Ireland, disadvantaged in numbers after losing Charlie Willett to a ligament injury in the 25th minute, that held the game up for nearly 10 minutes, didn’t give up and looked for a consolation. Their first serious attack in Welsh territory came in the last ten minutes, but that came to nothing.

When Wales got the ball back, they scored from a length of the field set. Burnell went over for her second and Wales’ eighth to wrap up the win and lift the trophy. 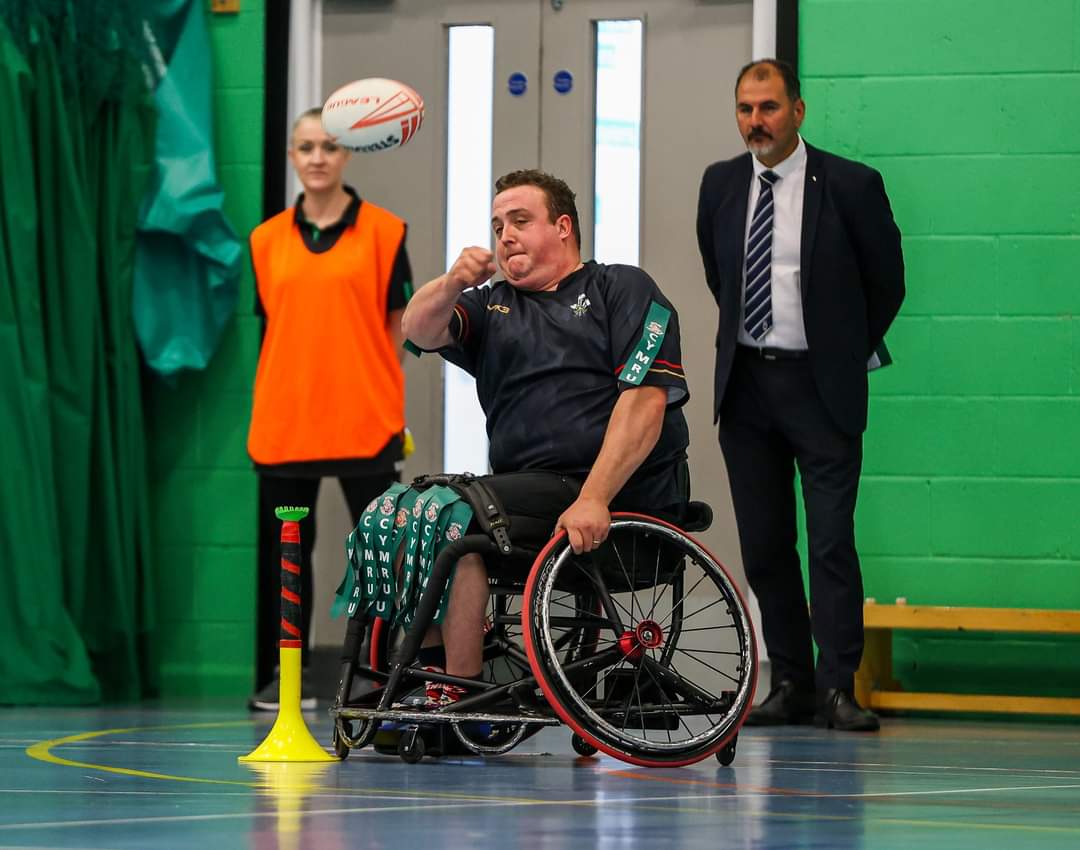 The Wales Wheelchair Rugby League side started their World Cup preparations with a 67-52 victory over Ireland in Halifax.

Stuart Williams went over for five tries, Stephen Halsey with four and there was one apiece from Mark Williams and Mason Baker

Ireland were never out of the contest, with three tries each from Peter Johnson, who converted eight out of nine, and Tom Martin, two from Toby Burton-Carter and one from debutant Oran Spain.

Stuart Williams opened the scoring within the first two minutes as a gap opened up in the middle of the Ireland defence under the posts for an easy score.

Halsey, who also scored 11 goals and a drop-goal, extended Wales’ early lead to 10-0 but Ireland bounced back and took the lead converting both of their early tries.

The Irish tried to extend their lead but mistakes on the line allowed Wales back in and take a 10-point lead into half-time.

The Welsh started the second half as they started the first by scoring two quick tries with Mark Williams going over in the corner before Baker came on as a technical sub scoring his first international try.

Again Wales were pegged back by Ireland who would not go away and got it back to a two-score game but once again Wales managed to extend the lead and dashed the hopes of an Ireland comeback.

All 24 players in the World Cup squad featured for Wales, with Kyle Evans and Caleb Aekins making their international debuts and seven players who currently play, or have played, for host club Swinton Lions, took to the field.

It was the perfect start for Wales when on four minutes, Walker came charging onto the ball close to the line and went over under the sticks, leaving James Olds with a simple conversion.

Lebanon responded on 11 minutes as Khaled Rajeb supported the break of Joshua Maree to score under the sticks. The Cedars made it back-to-back tries from the following set, with Kiraz showing great pace to burst through the centre of the field and race 40 metres to the try line. Doueihi was only able to convert one of the scores, giving Lebanon a 10-6 lead after 15 minutes.

The Lebanese were next to strike, too, as Elie El-Zakhem had enough strength to withstand three Welsh tacklers and ground the ball on the try line. It could have been worse for John Kear’s men moments later when Elliot Kear was beaten in the aerial duel by Abbas Miski, only for the winger to be ruled offside in his kick-chase.

It was a reprieve that only lasted a matter of minutes, when a Rajeb grubber was hunted down first by Michael Tannous.

Wales had a chance to add to their early score when Walker picked up on a loose pass and set Ralph clear. The scrum-half raced 40 metres into the Lebanon half before opting to kick for the chasing James Olds, but Lebanon cleared up.

Then get a moment of quality just before the hooter, with Adam Doueihi looping a pass over the head of Rhys Williams and into the arms of Josh Mansour, to give Lebanon a 24-6 half-time lead.

Wales had enjoyed little front foot ball throughout the first half, but a strong carry from Tom Hopkins set them on their way. Josh Ralph took advantage to run at the line, ably supported by Curtis Davies, who finished next to the posts and giving Elliot Kear a straightforward conversion attempt.

He repeated the feat from the next set, after Ben Evans crossed over the halfway line untouched, offloading to Curtis Davies who finished from 30 metres. Kear’s second conversion brought Wales to within six points.

After that quickfire double, the next score came from the Cedars, working an overlap on the left hand side that provided the opportunity for Tony Maroun to finish in the corner, and when Bilal Maabani crossed in almost the same spot minutes later, it gave Lebanon a commanding 32-18 lead with 15 minutes remaining.

There was still fire in the Welsh dragon, and after a neat inside ball from Ralph sent Butler racing clear, Lebanon were in retreat. Fozard picked the pass from the next play and found Kyle Evans who finished acrobatically in the corner.

Andrew Kazzi scored with a couple minutes left on the clock, with Abbas Miski’s conversion finishing the scoring for the afternoon.