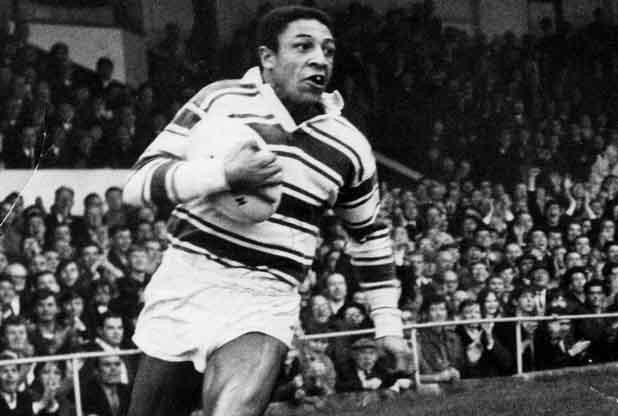 This Wednesday on BBC1 at 10.40pm sees the launch of a new documentary about one of Wales and Great Britain’s greatest-ever rugby league players, Clive Sullivan MBE.

“Clive Sullivan: Rugby League Legend” is half an hour in length, has been created by “Cardiff Productions” and “Jams and Mr B Productions”, and it sees former footballer, and Clive’s nephew, Nathan Blake talk to family, friends and pundits to celebrate the man who did so much to help the next generation of black sportsmen and women.

Blake went to locations in South Wales and Hull to make this programme. He is the “Mr B” in “Jams and Mr B Productions”, the other partner in the company being Jason Mohammed, well known to most sports fans for his presentation of football’s “Final Score” on a Saturday afternoon.

He leaves no stone unturned to find out information about his Uncle Clive and makes full use of his travels to Humberside by attending the latest Hull derby to experience the rivalry and discuss the shockwaves it caused when Sullivan moved from one Hull club to another – a rare action indeed!

This outstanding programme delves into Clive’s life and influence on and off the pitch, with archive footage from throughout his career, including a clip from 1983’s Superstars, where he took part in a 100m sprint against fellow sportsmen, including football legend George Best.

Blake, Mohammed and others from their team attended the world premiere in Penarth last Wednesday and one could see how proud they were of their first ever production about such a rugby league legend. But he’s a legend primarily in the north of England, and they touched on this in both the documentary and the Q and A that they held afterwards.

The release of this documentary is timely. It’s 50 years since Great Britain won the World Cup in France. Sullivan was captain that day and scored one of the most memorable tries in rugby league history. He was the first black captain for Great Britain in any sport, the second black captain of any British national sporting side – the first for 90 years – and the first ever in Rugby League. This was also the last time a side from Great Britain has won the Rugby League World Cup. Since splitting in 1975 and then again from 1995, both England and Wales have yet to lift the trophy as separate nations. With this year’s World Cup just around the corner in England, many fans from the host nation expect this to change.

Plus October is Black History Month, and racism is touched on in the documentary, including in rugby union at the time. Whilst at Wales Rugby League, we fielded our first black international player in 1935 in George Bennett, in rugby union it took until 1983 before Mark Brown was selected by the Welsh Rugby Union.

As touched on above, and in the documentary, Clive Sullivan’s name isn’t as well-known as it should be in his hometown of Cardiff. This is set to change, hopefully starting now with this documentary in a solid post BBC News slot, plus he’ll soon be immortalised on a giant statue in Cardiff Bay alongside his fellow former international players Billy Boston and Gus Risman.

Sullivan sadly died of cancer in 1985 and this documentary shows some previously unseen photos from his final days and shows that he was in good spirits despite knowing his health was failing.

This is a must watch for all rugby league fans, well anyone. It’s superbly presented by Blake and the research from Dafydd Mathieson is also first class. It’s on BBC1 Wales only on Wednesday at 10.40pm but will be available live on BBC iPlayer at the same time, and again for at least 30 days after transmission. It will also be shown on BBC Two around the UK on Friday 21 October at 9.30pm.

See the video below at Ian Golden talks to Nathan Blake about the documentary.