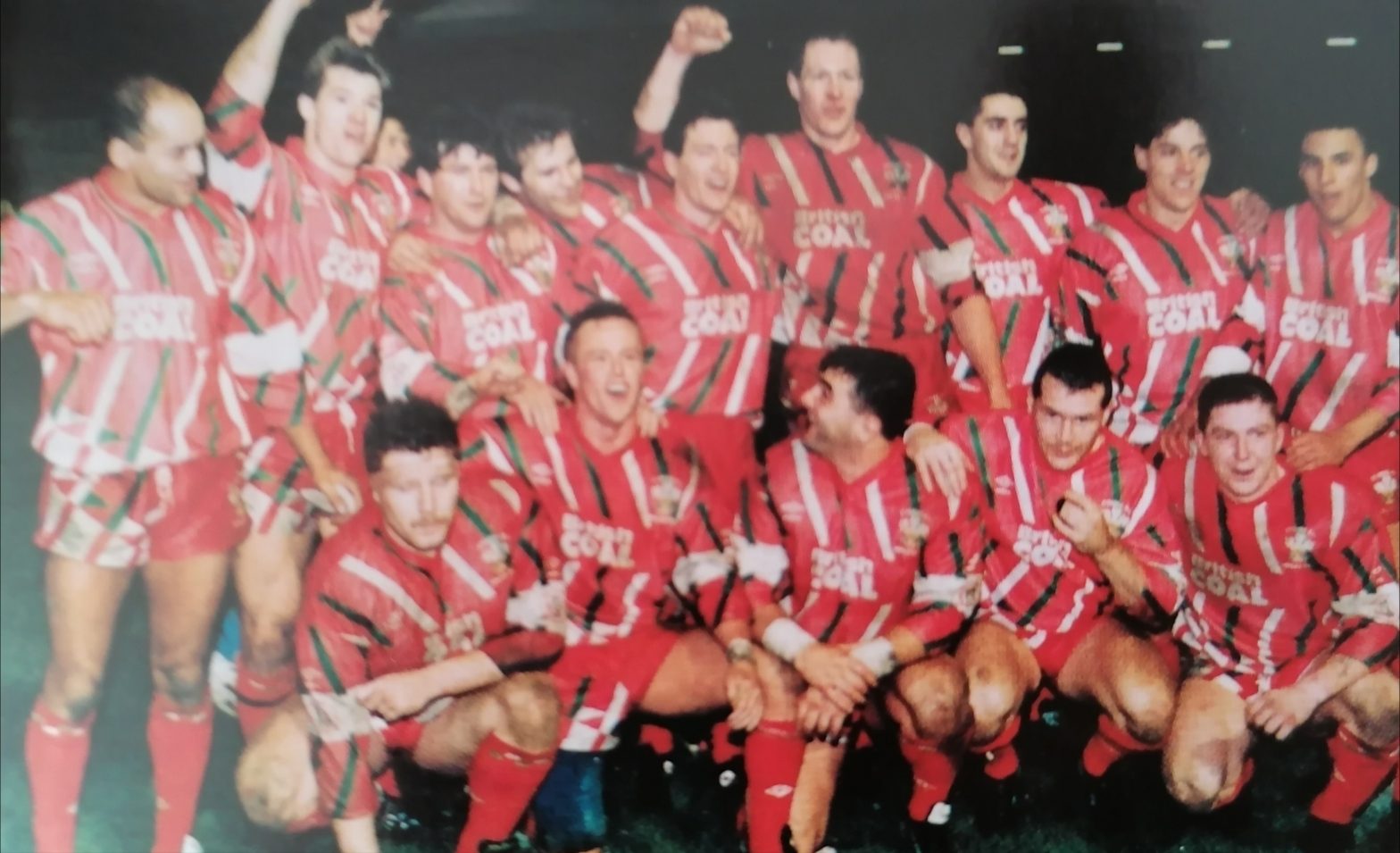 Thirty years ago today, on Sunday 27 October 1991, Wales were taking on Papua New Guinea in Swansea in a match that relaunched the Welsh men’s national side as we know it.

Before that historic game, it was a seven year and 13 day gap between games. After Wales had lost to England in Ebbw Vale on October 14 1984, that was it for a while. Wales were barely getting together 13 qualified players let alone a squad and the last win was on January 15 1978, a 29-7 defeat of France in Widnes.

By 1991, there was an abundance of top players from Wales turning professional and there was no better than Wales captain Jonathan Davies. He’d switched to the 13-man code nearly three years’ earlier and many decided to join him.

So by the time Papua New Guinea were due to tour Europe that autumn, Wales had the confidence to host a test match again with the Vetch Field at Swansea being chosen as the venue.

The location was planned well. Just over a year before, Davies and his Widnes beat Wigan 24-8 in the old Charity Shield one-off game at the same stadium in front of 11,178 fans, many of whom were South Wales based RL fans. I know that as I was one of them, attending my first ever live game. 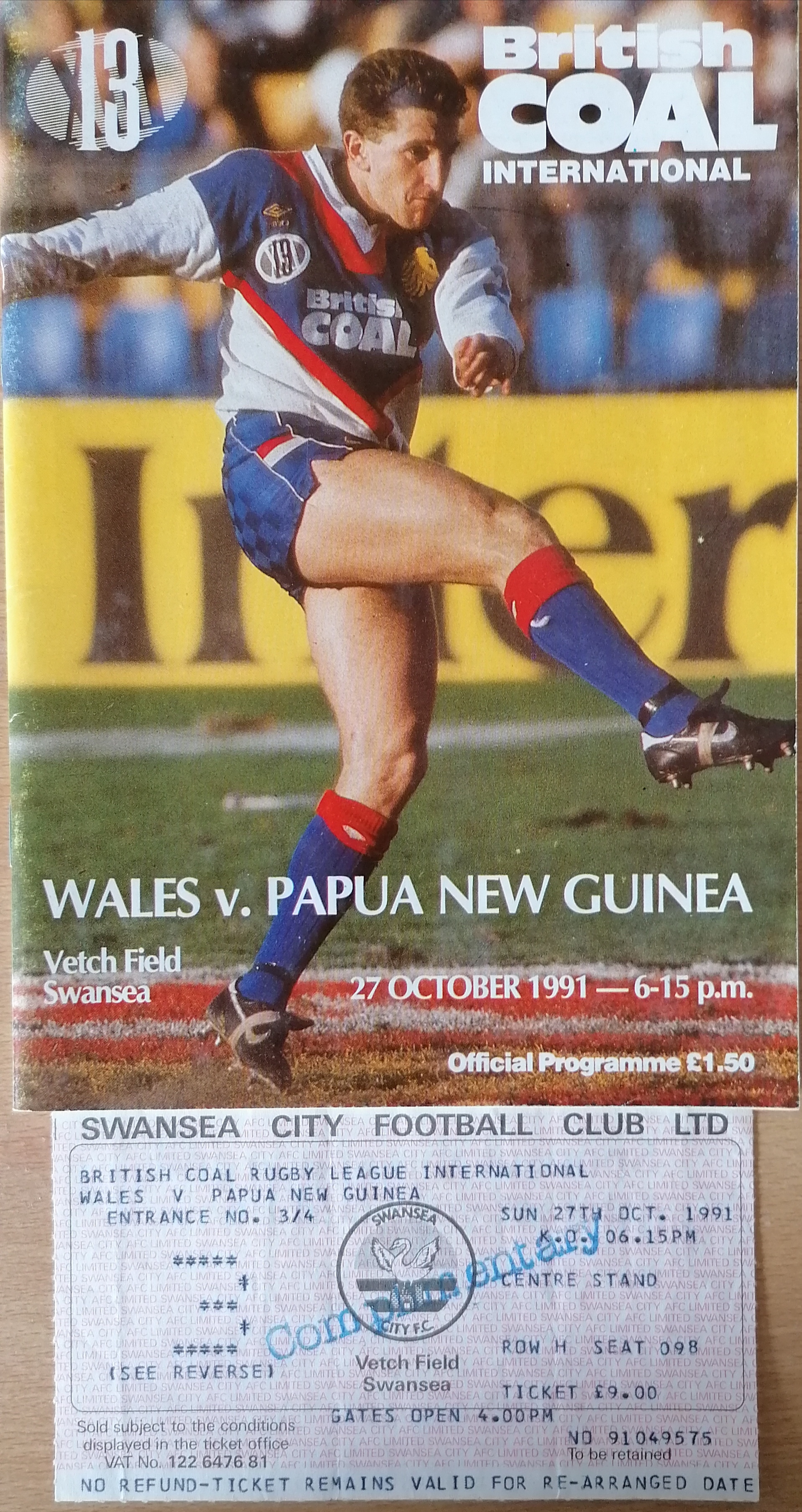 On October 27 1991, I was about to attend my second live RL match. I’d not bought a ticket in advance and it was lucky I hadn’t. There was quite a queue in that old Swansea City club shop that was built into the row of terraced houses by the Vetch Field, so I’d taken a quick walk round to see if there were any other outlets with less of a wait.

On my travels, I bumped into an Australian in a suit who was looking lost. He couldn’t find the match officials entrance (well who could? It, like the club shop was built inside a row of terraced houses). So I showed him the way and to thank me, he gave me a spare ticket, for the centre of the Grandstand no less. It turned out that he was referee Bill Harrigan and I had nabbed one of the best seats in the house for free.

Sadly I don’t think I made the curtain raiser which was an exciting encounter between Wales Students and Wales Dragonhearts.

The ground started to fill and in the end we topped the attendance from the previous year with 11,422 cramming into the relatively small arena. The atmosphere was building and there were many interested locals once again. I can always remember one little boy talking to his mum.

To which the answer came back as “Rugby did, darling.”

I wonder if they still watch or are involved in the game? They certainly would have fallen in love with what they’d seen and witnessed. With a brass band playing and a male voice choir singing, team manager Jim Mills and head coach Clive Griffiths, who had recently been coaching Wales Students, led their side onto the pitch to an almighty applause and following the anthems sung with gusto, it didn’t take long for Wales to get on the board through a Jonathan Davies penalty.

But that was where the similarities to a typical rugby union game ended as Wales scored try after try after try against a Kumuls side that didn’t know what had hit them.

Phil Ford, the only player not to be making his Welsh debut that night, was first to cross with Davies converting to make it 8-0 on 10 minutes. Rob Ackerman, Jonathan Griffiths, Anthony Sullivan and Davies himself quickly followed suit and Wales were 30-0 up on 28 minutes.

By half-time it was 46-0 with Wales previous margin of victory, a 41-7 win over France in Llanelli in 1935, already beaten (that game is now the tenth best win for Wales). Allan Bateman, Sullivan and Ford were the remaining first half try scorers.

Wales took eight minutes to extend their lead through an unconverted Kevin Ellis try with Sky’s man of the match Dai Bishop getting the next on 56 with Davies kicking his eighth and final goal of the evening.

Ford’s hat-trick try brought up the 60 point mark on 65 minutes, substitute Adrian Hadley went over on 73 and Davies, despite missing his last three goal attempts, ensured he scored the first and last points of the evening, when his try on 79 minutes brought the score up to 68-0. Read the match report written on the day here.

It was a remarkable effort for a fledgling team albeit one that was full of hwyl. Sky Sports, who were showing international rugby league for the first time, were loving it. I, along with many others, managed to get onto the field at the end and if you want to see the match recording in full below, you can see me in shot when Dai Bish was being interviewed.

As you can imagine, I drove my 35 miles back home a happy man. I’d watched international rugby league for the first time and I knew I’d be back to watch the Wales men’s side again – it’s been 50 times more so far in fact! Today should have been my 52nd Wales men’s game as we were meant to be taking on Cook Islands in our opening game of the 2021 Rugby League World Cup. We of course now need to wait another 12 months for this fixture, but I’m sure it’ll be worth it.